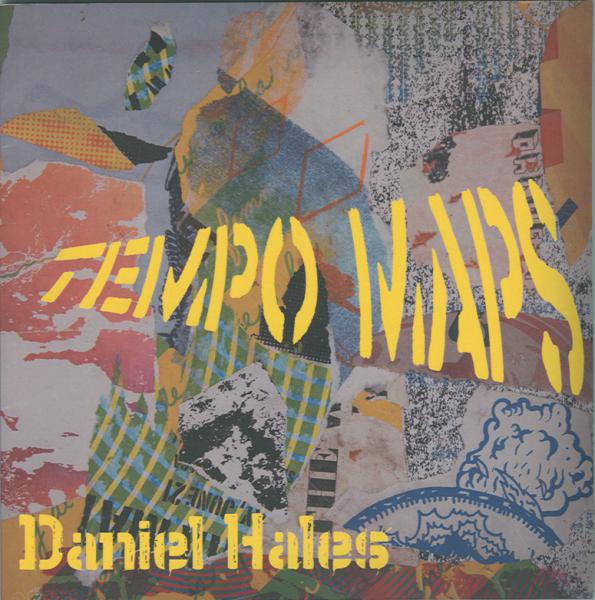 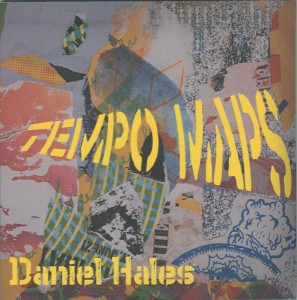 At the beginning of Tempo Maps [Ixnay Press] Daniel Hales helpfully quotes a stanza from Emily Dickinson’s I think I was enchanted, confirming my suspicion that he is, here, preoccupied with the music of his everyday life.

The text is a mixture of free verse and prose poetry. The pamphlet has two front covers and flips in the middle, offering at least two possible beginnings and ends. Hales seems to try to explain the formatting in one of the two possible first poems ‘:minor symphony (snow)’.  It is my favourite in the collection, so I’ll quote the first stanza here:

No one doubts snow’s musical ambitions.
We begin at opposite ends of it
a raw rhythmic chunking

The poem understands the harsh percussion of clearing snow with spades as music, giving us a scene in which two people start at either end of a drive, meeting in the middle where the ‘last of it’ is them themselves being pushed into ‘each other’s shovels’.

The accompanying audio CD, on which the author reads his work with occasional interludes of music and other sounds, suggests, however, that despite the two possible entry points, Hales has a preferred sequence, a preferred end from which to start.

Perhaps this seems a small tension. But for me, the striking formatting suggests ordering is central. Yet Hales’s main and most important word in these texts appears to be the paratactic ‘and’. We are presented with a world in no particular order, much in the manner that Baudelaire’s flȃneurs apparently record their environs like uncritical cameras.

Of course, Baudelaire’s flȃneurs were far from artless and I tried to discern Hales’ point of view, but failed. There’s absolutely nothing wrong with artists trying to record the way they perceive the world. If Hales finds the world jumbled and messy, he would hardly be the first. But why then spotlight order, rather than disorder? Are two beginnings and two endings enough? Is upside down chaotic? I ended up unsure.

Then again, as Hales says in ‘:hula hoop’: ‘There will always be something you can’t explain.’

I wonder if the boldness of the pamphlet’s acrobatics does Hales a disservice, distracting from some of his other ideas which are potentially more compelling.

Threaded throughout the pamphlet is Hales’s interest in the word minor and its homophone miner. Various blurbs tell us that he lives on a minor street (Miner Street?) in Greenfield, Massachusetts, and the parts of his ‘:minor symphony’ appear at irregular intervals in the text, with his ‘Miner Street Symphony’ concluding the CD.

Four of the pieces appear to be pairs, with both longer and shorter versions appearing. So ‘:thaw’ is an edit of ‘:more thaw’ and there are two of ‘:minor symphony (snow)’, one shorter than the other. With the words miner/minor scattered so liberally through the text it’s tempting to wonder if these were exercises in word extraction and, by extension, to wonder if, for Hales, this is an organising principle for his poetry.  If so, so what? I can’t think of any poetry, or any creative writing, come to that, which can’t be described in this way.

I was more interested in Hales’s preoccupation with scale. We all live on minor streets in the context of six-plus billion people, the vastness of the internet, the universe. The flat, flȃneuristic prose poetry does seem to me an interesting form in which to attempt to capture something of how this feels.

Even the oblongish shape of many of the poems recalls a viewfinder, or mobile phone screen in camera mode, always a partial view, framing only what it can, the white space suggestive of limitless et cetera.

I enjoyed listening to the CD, although Hales’s voice is rather flat and he delivers the pieces with what I imagine must be a purposeful lack of affect. I was surprised, given the title of the pamphlet, that he didn’t seem to play with tempo much, despite the opening metronome ticking. I was glad of the musical and other-sound interludes. 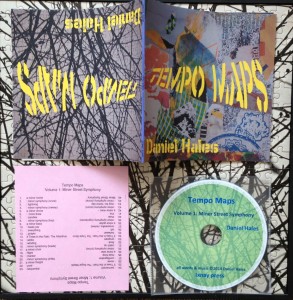 One of the features of the work I especially enjoyed is that Hales’s world is my world, a strange mix of familiar quotidian nd newish technology, as in ‘:program’, in which people ‘don’t have you programmed into their devices’ and the centrefold piece ‘:permanent’, which plays with the terrifying ‘PERMANENT FATAL ERROR’ message.

He has some interesting and satisfying phrases, too. In ‘:minor symphony (score)’ I relished ‘an implied trumpet’ and the lovely ‘hallway of always’ while ‘:thaw’ gave me a great what if — ‘the death of synonyms’— to chew on.

Some pieces, for example, the two sentence ‘:this’, I found simply inaccessible:

Walked into the polar vortex in search of the perfect footprint. This is how
to make gauze.

A joke about Gortex?

‘:beats’ per contains a lovely pun: ‘freak when sees’, an interesting and pleasurable deconstruction of a word I’d not considered in this way.

For the most part, reading Daniel Hales’s poetry is difficult. Constant uncertainty can sap the will. When, later, in the same short piece, he gives us: ‘… someone is writing down all my inconcisions’, I found it hard to banish the rather cruel thought that Hales was here risking the reader’s agreement.

And again in ‘:minor symphony (key)’: ‘We talked in my head for hours while I weeded about incompletes the discrete parts of many different things.’

Perhaps that’s a fairer summary of the soundtrack to his world given here.