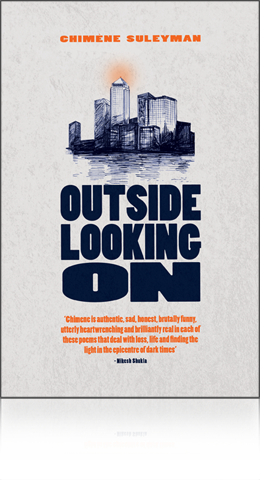 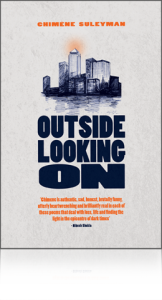 A common workshop exercise is to trim the first lines from a poem, to fend off temptations to introduce or pre-empt. The very beginning is not a very good place to start. In Outside Looking On, Suleyman always begins right at the heart. ‘Cultivating,’ for instance, starts strongly:

And when you offered that pained expression
through a bus window, I suppose
you would have already known
that you were done; something you would later
blame me for although you had already decided
she would be your life,
the messages, the language lessons.

With its opening ‘And…’ the poem is representative of the whole collection, its casual phrasing disguising its disjunctions and its brevity implying some bigger drama. It suggests a drama so intense that rather than express the speaker can only inhabit it, working through the objects and occasions that make up a life. Suleyman is a forceful performer of her work and the spoken word influence is clear in her rhythms. She is, above all, a strong rhetorician.

As Dave Coates writes, Suleyman is a poet of concision, as when she starts a poem with the speaker casually mentioning “when I threw meat at that waitress.” She is a poet of implied backstory. It’s efficient, and most enjoyable when understated; in poems such as ‘Coffee Table’ or ‘It Might Have Been the A140’, the relative plainness of the style gives a lot of weight to its simple objects. These are conventional moves, but when she then ends a poem with “And it is from our seats / we are watching the weather change” we are more than willing to do the work.

There are times in the collection, however, where this tendency, this condensed gesturing towards external biography, appears to have been taken as a surrogate for poetic writing, whatever that might be. In poetry, obscurity is often where thin ideas go to hide. Take, for instance, ‘Balcony (part one)’:

From the balcony he had attempted
to throw him. A walkman between
mattresses embedded between stains.
Soon they would tear it to the ground,
these windows like dry ponds, a spacebar
uninterrupted. Even where doors were
newspapers, it heard farewell.

In the first, third and fourth sentences we have subject and object pronouns (he, hims and its) for which it isn’t clear to what they refer, or whether they are consistent. We have a salad of disconnected images – ponds, spacebars, newspapers – in tropes that are mostly confusing. (What’s an ‘uninterrupted spacebar’?) The final sentence, with all the conventional gravity afforded to it at the end of a poem, makes no sense at all; visually a door (rectangular and hinged) can open like a newspaper, but it isn’t clear how that relates to not expecting to hear “farewell,” or indeed anything. And I suspect that this, again, comes from a focus on performance: with a reader to propel us onwards, obscurity has less time to perplex. On paper it becomes more of a problem.

Outside Looking On is ostensibly organised around the common symbol of Canary Wharf, perhaps due to its publisher’s stated interest in “writing about place.” The poet’s Introduction, after a description of how Canary Wharf, and the building of it, featured in her childhood, becomes distracted in how loneliness is “unexceptional” and everywhere:

From a house in Finchley, at the tip of a market in Clapton.

From a dentist’s office in Muswell Hill, a bedroom in Deptford, a hospital in Archway, a train in Essex, a bus in New Cross.

As suggested in Suleyman’s digression, this, and not the tower, is the main interest of these poems: in all these places we imagine those busy with living. Outside Looking On is at its best when describing people, when taking on their places and their voices. It’s at its best when it doesn’t try to be too poetic, as this is enough. 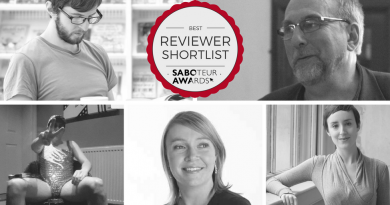 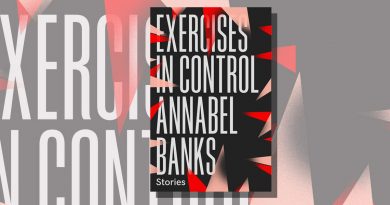