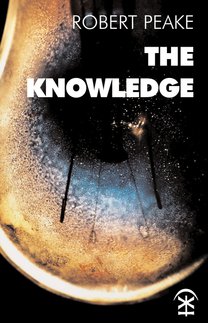 Robert Peake’s The Knowledge (Nine Arches Press) is a subtle, tender collection whose mixture of narrative and descriptive images inexorably draws the reader on to (occasionally painful) revelation. The book is divided into three sections, each bound by a loose theme. ‘The Argument’ is composed of naturalistic poems depicting the lives of plants and animals, some of them human. ‘Postcards from the War Hospital’ explores places where ancient past and brutal present meet, often focusing on the dangers of greed and human hubris. The third and final chapter, ‘The Smoke’, leads the reader on a formal journey during which the minutiae of everyday life succumb to sweet decay.

‘The Argument’ begins gently. Poems revealing the small, bright, easy-to-miss beauty of pigeons and honeybees deepen (and darken) into melancholic loss. ‘Amuse-Bouche’ provides a small taste of the life of a boy, images of growing up revealed as ingredients in some totemic meal:

Lint from your best-loved jumper
sprinkled with grains of a childhood sandbox,
wax shavings from your preschool crayons

These images, sigils of innocence, intimate some unnameable sorrow:

Of course, for dessert we have Madeleines,
to dip in a tea made of vapour and dust,
sweet-smelling, like the home of your elderly aunt,
which dissolve upon contact and waking. Go on.
Have another. You will never be full.

‘Postcards from the War Hospital’ delights in comparing the slimy self-excusing rhetoric of modern bankers with the blazing hubris of Alaxander the Great. As with many film trilogies, the middle chapter of this book is the weakest, but clumsy, clichéd couplets such as this, taken from ‘Blessing the Bankers’, ‘We thought the good times would never end / forgot the dams were built against bursting’, are contrasted (and partially redeemed) by startling, beautiful phrases: ‘We troubled no-one with our dreaming.’ In this section, the poet takes pleasure in pointing out the perils inherent in having ‘too much’.

‘Soldier at the Tomb of Alexander’ could serve as a treatise on hubris:

So this is your overthrow, unable to
side-step mortality, and a sarcophagus

will be your tent, heaped with
your belongings, raised up from the soil.

What will they do or you now?
Better to bury a snowball in the ground,

The third and final section, ‘The Smoke’, features a wonderful sonnet crown (titled ‘Smoke Rings’) in which every note strikes true. My last two books were composed of acrostic and double-acrostic sonnet crowns and cycles, so I am really the ideal audience for this odyssey in form, but the craft evidenced here is of such quality that even those who are form-adverse should take pleasure in this piece.

‘Smoke Rings’ describes the voyage back from the Home Office in Croyden where American immigrants (like Peake) are issued UK citizenships or visas. Peake exactly captures the aura of the civil servants employed there, ‘brown, jobsworth elves who know the list / of who gets Christmas, who gets coal.’ As the crown cycles on, the poet reveals the small pathos hidden in the world’s most easily-missable details, ‘The exhaust pipe of a hackney carriage / replies to the beat of a diesel drum.’ Eventually, he reveals glimpses of the rot that undermines us all:

Beneath our dew-spotted feet, the earth grinds its teeth.
Sealed away like embers in the furnace of the heath,
plague pits chew ancestors’ memories to tar,
the pocked bodies smelt, give off obsidian heat.

Peake’s great strength is that he knows what death is, and is not afraid to make us look at it. The fact that he leads us there slowly, moving with precise and careful gentleness, shows that (as a writer) he is kind, as well as skilled.