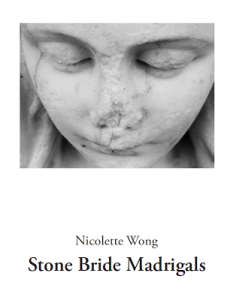 Nicolette Wong has one of the best biographies out there, she is ‘a dancer, magician and editor-in-chief of A-Minor Magazine and Press’. There are certainly elements of the theatrical in her pamphlet Stone Bride Madrigals. The opening poem, ‘The Death Circus’, depicts a man who:

the ballerinas
the inflatable husabands
where the radish clowns

unfurl across
a velvet stage

Overall though, I’d be more inclined to describe this as a haptic pamphlet, the poems have to be felt like sculptures, and observed from different angles. The title poem comes from a Brooklyn statue that cameos in many of Wong’s poems. While various stones do make appearances, it’s Wong’s tactile descriptions of landscape and cityscapes that make the strongest impression. In ‘Celebration’, the cars are ‘branded with last night’s lava’, elsewhere, there is a ‘buzzcut sky’ that makes you want to reach up and ruffle it (‘Sky Well’). Individual images have a tendency to get lost in the sensory pile up, but when extracted can be turned over in the hand with wonder.

The words ‘braille’ and ‘corallite’ appear twice each in the slight pamphlet. We have on the one hand a fossilized coral, and on the other, a method of reading that depends on touch, both too striking, to fly under the radar:

On the braille map that trembles
through your gut

Get to my next life.
Vomit corallite stories at the gate

ploughed backyard that hovers
and ceases in braille scars

What this repetition does is create a physical overload, which certain poems express in a more full-on manner. In ‘Interlude’, the narrator, drenched in emblems, actually stops to plead ‘Please, tell me / why I am soaked in this moment’. I think this is both the strength and weakness of the pamphlet as a whole, if you like baroque syntax with unusual imagery then Stone Bride Madrigals will work for you.