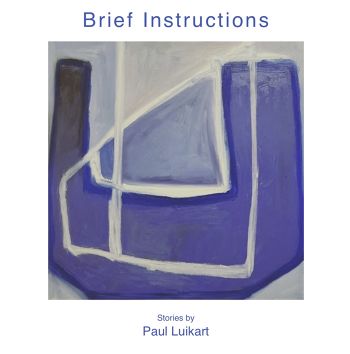 Brief Instructions (Ghostbird Press, 2017) is a collection of eighteen pieces of flash fiction by Paul Luikart, accompanied by three abstract drawings by James Vanderburg. The collection opens with a – for me – offputtingly aggressive piece, but then goes on to depict a series of gritty, much more emotionally nuanced, vignettes set in America’s (as they say) ‘seedy underbelly’. There is death and violence, aggression and crime, regret and illness and guns. Luikart manages to, through the impressive play of detail and implication, evoke the circumstances of disparate, but similar people: the desperate, the dirty and the down. Brief Instructions is a collection about redemption as well as rejection, and a reader sees as much human warmth as he or she sees lonely selfishness. 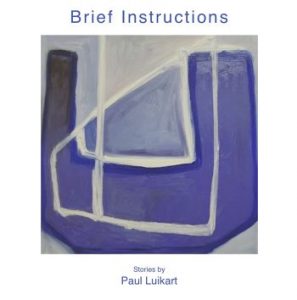 ‘Brief Instructions’ is the opening story, and is a set of first person requests detailing what the speaking voice would like to happen to their body after death. In its aggression and its violent descriptions of bodily destruction, it is pointedly unsubtle, and though the overwhelming sense of nihilism and dissociation is symptomatic of Luikart’s work throughout, it is here presented with a much less grounded sense of reality, and doesn’t have the power of later pieces, like ‘Worried Life Blues’.

‘Worried Life Blues’ is a deeply moving story about a man refusing to name his newborn child while avoiding discussion of the mother’s death during labour. John, the bereaved man, does not express his feelings or his emotion in language, and the only insights Luikart gives us into John’s psyche come from clipped dialogue and the words used to describe the way John digs – ‘slinging […] slashing […] stabbing’, an activity he uses to occupy himself while the doctor waits. In this piece, and the other pieces that are most successful here, it is implied emotion that works best. Shown not told, innit.

‘Reasons’, another piece about a dying person, makes the same missteps as the opening piece, in that its graphic detail of a bullet hole detracts from the emotional weight of its plot – a suicidal individual finds reasons to live after firing the shot that makes life impossible. It’s not that Luikart is unable to use violence and injury effectively and with emotion in the same piece, but in ‘Reasons’ and the titular story, the violence overshadows the meat of the piece. I suppose this is a risk with flash fiction: when one’s story is dealing with emotion and graphic violence in 300 words, it’s easy for the latter to overwhelm the former.

However, the rest of Brief Instructions is compelling, engaging and regularly moving. ‘Marnie and Trig’ is particularly strong and is about a young couple who have spent the Summer begging in Chicago with the plan to save enough to travel to Seattle. However, Autumn arrives without full pockets, and Marnie disappears with their stash of cash. Trig believes his partner has headed coastwards alone, however she reappears at the story’s end with much more money, saying she’s spent the day ‘sucking dicks’. In a page and a half, Luikart is able to describe an idyllic outsider relationship that turns desperate, before a character begins a controlled embrace of sex work and then the completion of the lover’s original – and previously financially unfeasible – plan. This is powerful, brief, writing, as too is ‘Senorita’, about a recently dumped man witnessing a vengeful woman kill her abusive partner, as too is ‘Victim’, a strong piece about a seriously injured man being dropped off at a hospital. This piece is more violent, more extreme, than most of the other highlights I’ve picked out, but it works incredibly well because the violence is witnessed through an emotional filter.

‘In the Cave in the Holler’ is a beautiful piece about a son grieving for his father, in spite of their terrible relationship, while the closing story ‘He’s Alright, This Doug’ is gorgeous, emotional writing about a recently released ex-con trying to do right and make friends. Luikart’s particular strength is dialogue, which is used here a lot more frequently than I’m used to seeing in flash fiction.

The stories work well because Luikart’s prose is powerful and emotive, however the inclusion of drawings within the text should be discussed.

James Vanderberg’s abstract drawings are pleasant to look at. They are disarmingly simplistic, with thick lines and strong curves, but I struggled to see a connection between them and Luikart’s prose. There are only three drawings, but 18 stories, which is a big disparity. Had Brief Instructions included more of Vanderberg’s artworks, each would have had more, rather than less, importance. As it stands, an image for every six stories does not create a cohesive aesthetic. If there were more images, Brief Instructions would feel like a collaborative work, but instead it is a collection of prose accompanied by three intriguing, but ultimately dissociative, drawings.

Although the images do not necessarily fit, nothing is lost by their inclusion: Luikart’s writing is strong enough on its own terms. There is grief and desire and shame here, pain and poverty and rage, all of which combine to create a prose collection that achieves everything it sets out to. Brief Instructions is moving and dark and entertaining. Kinda what something like this should be, right?