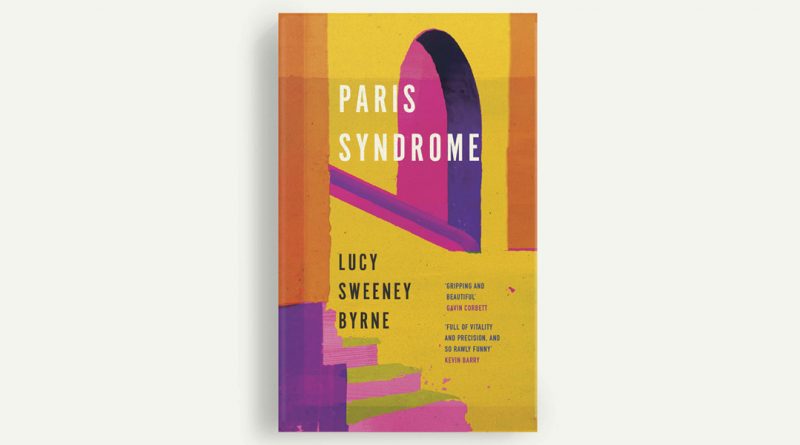 In her debut collection Paris Syndrome (Banshee Press), author Lucy Sweeny Byrne pierces the glamour bubble of millennial travel guides, and injects them with something that is simultaneously insidious and distinctively real. Her characters brush with dangerous men with blurred faces, and where there is beauty, it is often found in unseemly places. In her shattering of traditional exotic portraits, Byrne pulls from their depths the twisted, fascinating truths of womanhood, and presents them to us, still beating, clenched in her fist.

In Byrne’s opening piece, ‘That Sinking Feeling’, her protagonist Lucy runs away to New York to find work on Ye Olde Americana, a decrepit moored up ferry boat in Brooklyn. The deranged owner, a kind of Miss Havisham, Elizabeth, covets her boat jealously, demanding full devotion from all of her workers.

“‘I want,’ she said, eyes gleaming, ‘for all the great leaders of the world, for Mr Obama and Mr Putin, and whomever else’ – she always said ‘whom’ or ‘whomever’, never simply ‘who’ – ‘to come to Ye Olde Americana to meet, to talk, to navigate new, pure ways through these murky waters, and to altogether change the world, with Ye Olde Americana at the helm!’”

Men are often a simultaneous source of suspicion, terror, escapism and amusement for the many protagonists of Paris Syndrome.

Byrne carefully documents their expressions with almost pin-point precision, so much so that I would be not surprised if there was an autobiographical element to at least some of these stories. That, and all of Byrne’s protagonists are named Lucy.

The doe-faced Robert who takes Lucy under his wing is often found drinking alone at the bar on the Ye Olde Americana. From his initial hopeless attempts to flirt with her, to his readiness to care for her after banishment from the boat, it’s a poignant reminder of all the loneliness in the world and the entrapped male ego. Robert is ready to be whatever Lucy needs, be it prince charming or a kindly uncle, and is trapped by his own need to validate his manliness. As Byrne’s runaway Lucy bumps into these dusty old toys, they spring to life like faded clockwork.

In ‘And We Continue to Live’, Lucy takes a trip to Chernobyl. Her mission is to experience something profound, despite her own profound objections to “dark tourism”. Her on-and-off boyfriend James means little to her, and she yearns for a cataclysmic event to give her life meaning.

“Lucy took her phone out from her pocket again and selected some sad music. (…) At first, there was nothing – her own mild hunger maybe, unconscious attempts to identify a certain smell rising from the seats of the bus – and so she shook her head and forced herself to focus even harder (…) She felt a sudden violent surge of emotion, and she breathed in deeply through her nostrils, relishing it. Yes, this acute sympathy, this feeling of their pain – this is what she’d come for.”

Experiencing intense feelings of restlessness, all whilst hampered by her period (and lack of sanitary wear), Lucy makes her way through Chernobyl. Under the guidance of Victor, her Russian tour guide, she and his dark retinue are told of grim tales from the Zone.

Things get surreal in ‘My Life As a Girl’, a haunting piece that navigates the dizzying spectacle of womanhood. Written in the present tense, we watch a “Girl” go about her life, making sandwiches, watching TV. All the while, eerie scenes propagate outside her window.

“In the window (which is growing larger, expanding outward across the whole back wall, the whole wall of the apartment block, the city, the country, the continent, the world), images appear: Times Square; a sparrow on a branch; a woman from an African tribe sitting on the ground, a huge brown disc in her bottom lip; a nightclub seen from above (…)”

As the images outside the window grow more vivid, and the actions of the “Girl” more grotesque, you can’t help but flounder at the hopelessness being rolled out before you: the clear distress of a disturbed young woman against the backdrop of historical events that, on a global scale, have facilitated and maintained the patriarchy for thousands of years.

Lastly, in ‘Don’t Pretend You Don’t Know’, an incarnation of Lucy travels to the Mexican state of Oaxaca. She makes two new acquaintances, Juan and Pedro, and spends her time writing, drinking and exploring. If any story truly captures the essence of “Paris Syndrome”, it’s this.

“Sometimes we simply fulfill our prescribed roles, she thinks, cooing over a large sketch he holds up under the window’s light. And right now, for him, she is the admiring woman (…) Oh well, she thinks. For now, she is too tired to fight. And too alone here. All she has the power to do, here in Mexico, is to appear to acquiesce while, at best, quietly taking note.”

The term “Paris Syndrome” refers to the disillusionment exhibited by some individuals when visiting Paris, who feel that Paris is not as beautiful as they had expected it to be. For Lucy, Mexico’s potential bounty of experience all boils down to her stay in Oaxaca – and it isn’t the best. From starving dogs to dangerous men, her hopeful expectations are quickly subverted.

But were those expectations there to begin with? There is a memorable scene where Lucy boils water in a glass over an open gas flame. She does this despite knowing that the glass might potentially explode. In this small instance, Byrne suggests that our doubts and fears are capable of becoming real, despite our reasoning that everything will be okay.

Byrne’s keen eye for descriptive prose, and her ability to strip back the rose-tinted glasses of travel, mark her as a formidable talent to watch out for. Her stories aren’t necessarily highbrow – they’re blood, guts and sex. Yet she flirts with highly complex issues, femininity, sexuality, ego, and manages them masterfully, without ever an air of pretention. Under the guise of travel stories, Byrne completely captures the tragedy of women and men, warts and all.

Find out more about Paris Syndrome on the Banshee Press website.

Lucy Sweeney Byrne’s Paris Syndrome is shortlisted for the Edge Hill Short Story Prize 2020. Sabotage Reviews is covering a number of the indie published titles nominated for the prestigious award, including This Paradise by Ruby Cowling and This Way to Departures by Linda Mannheim. The winning collection will be announced on Monday 7 December 2020.