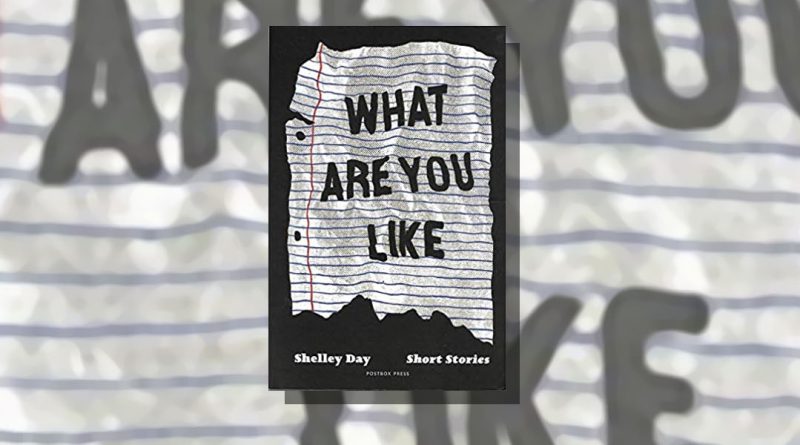 What Are You Like (Postbox Press) is a collection of short stories from author Shelley Day. Featuring a cast of strangely normal characters, and a flirtation with both the romantic and mundane, What Are You Like is a self-described exploration into “what we can’t quite grasp.” Sometimes, with the collection’s even split of paragraph-long thoughts and more traditional short stories, it can be hard to pin-point exactly what Day is grasping – but her penchant for illuminating the surreal within the everyday is disarming and keeps the pages turning.

In ‘The Frog Prince’ we are introduced to Stella, the young protagonist of Day’s third story in her collection. Stella and her family have just returned home from a funeral. Like many children, Stella lives without full comprehension of the world around her:

“I saw my grandpa at the funeral, I tell Grandma Ruby when we’re back home and we’ve had the tea and every-body’s gone, all except Mr Fanshaw that is.

Don’t you be getting above yourself, Grandma Ruby says.

Baloney, my mam chimes in.”

Together, Stella’s admission and her elder’s refusals to believe her, lay the foundations for a disturbing tale of innocence lost. Haunting and provocative, ‘The Frog Prince’ highlights both the horror of abuse, and the way in which a child’s imagination serves as a method of navigating the world around them and a means for exploitation.

In ‘Dolores and the Sick Men’, we drop in on Leroy and Dolores, an amicable chef and waitress who work at a grubby restaurant/café. One evening, Dolores has had enough. Her problem? The man on table five.

“In total, Leroy, she continues, I ask him three times, three times. “Is it your usual you’re wanting, Sir?” This last time very emphatic. But Table Five just keeps on staring down at this bloody book he’s reading, like his life depends. I’ve cleared my throat. I’ve moved to the side, I’ve moved smack into the field of vision of his one good eye. Nothing.”

In this “hospitali-thriller”, Day guides us through the very literal gaze of Leroy, who just wants to get his shift over and done with. As he listens to his co-worker Dolores’s story, we start to see the cracks – but who’s cracking first, Dolores or Leroy? From someone who’s worked in the industry, this sounds like a worst nightmare.

At times in What Are You Like, it feels like there are two forces fighting each other for control. Day often writes very short idiosyncratic narratives that exist thematically entirely of themselves. ‘Holiday Time’ is an example of this:

“There comes a time on a holiday when you start counting the days in the wrong direction, looking back, turning things over and upside down(…)”

While Day is certainly a talented writer, her paragraph-long chapters lack the depth of some of her larger narratives, which can be a little jarring. Day’s skill lies in her ability to illuminate the unspoken corners of darkness and light within everyday familial settings, and this capacity is better demonstrated in her more fleshed out narratives, like ‘Swimming For the Country’.

In this story, Cara and her brother live together in a flat. Her brother describes a strenuous relationship, where he acts as his sister’s primary carer through an apparently severe case of depression:

“Argumentative, that’s her way, her way of avoiding things she doesn’t want to look in the face. But as I said to her, be all that abuse stuff as it may our Cara, it’s nothing to do with us in the here and now; my sole priority is getting you better, and I said that in italics.”

Though at first, seemingly protective, Cara’s brother soon begins to elicit strange tendencies for control over his sister, seeking to not only undermine, but manipulate her wants and desires.

Day’s exploration of subjects such as familial abuse and generational redemption really drive home the idea that you never know what’s going on behind closed doors. Just as in life, things are not always as they seem, and Day skilfully guides the reader from one red flag to the next.

In times such as these, it can be useful to look inward for sources of hope and comfort. What Are You Like is clearly a collection drawn from the heart and one which was clearly enjoyable to write. I look forward to reading Day’s future works.

Find out more about What Are You Like by visiting the Postbox Press / Red Squirrel Press website.

Shelley Day’s What Are You Like is shortlisted for the Edge Hill Short Story Prize 2020. Sabotage Reviews is covering a number of the indie-published titles nominated for the prestigious award, including This Paradise by Ruby Cowling, This Way to Departures by Linda Mannheim and Paris Syndrome by Lucy Sweeney Byrne. The winning collection will be announced on Monday 7 December 2020.