Around ten per cent of York’s working population is employed in tourism, directly or indirectly, and more than a handful of those are employed in the city’s competitive ghost story industry. The historic centre is crammed with ghost tours, the spooks seeping through ancient cobblestone streets that have seen Romans, Vikings, Saxons and generations of people since. York is a city proud of its long history – last year celebrating the 800th anniversary of its city charter – and its streets, like the lawns of TS Eliot’s poem, have often been ‘pressed by unseen feet’.

York-based Stairwell Books has put together an anthology of prose and poetry taking its title (Pressed By Unseen Feet: An Anthology of Ghostly Writing) from Eliot, and offering up a series of chilling stories and spooky poems from Yorkshire writers. They are stories from the stones of York, or occasionally ghosts from farther afield. These are mostly concerned with things seen out of the corner of your eye, or poetic landscapes haunted by a feeling of unease or even just a memory.

Over the centuries, we’ve understood ghosts to be many different things. Sometimes, the souls of the dead, caught between this world and the next, that haven’t managed to pass on, to Heaven or Hell, maybe because they have unfinished business with the living. Or they’re memories of the dead, of those we cared about who have gone forever but somehow remain. Or guides/guardians from a higher plane of existence, hanging around to help mere mortals get through the process of living. Occasionally, as in Pressed By Unseen Feet, they appear as figures from history, when the distant past bleeds into our modern times. Then sometimes they’re something else even harder to describe and explain.

For example, ‘Cavern’ by Pauline Quirk, has as its narrator the spirit of a cave – its conscious essence, if you like. Like many of the other entries in Pressed By Unseen Feet the story hints at a world beyond human or mortal comprehension, pointing to a consciousness that can’t be explained by rational thinking or science. The anthology as a whole urges the reader to push the boundaries of our understanding and open ourselves up to the possibilities of a world we can’t fully explain. It asks what’s so special about the rational world in the first place, and suggests we’re limited by mortal blinkers.

Jim Fairfoot’s ‘Existential Pizza’ is another entry that asks the reader to look at the world in another way – it’s about what it sounds like it’s about – calling into question the reliability of the traditional five senses and rationality. What evidence do you need that the pizza is, in fact, a pizza? Like much of Pressed…, this debunks rational thinking with something not quite explicable.

On the other side (of the coin, perhaps, but maybe a spookier ‘other side’), there are the entries that imply we live our lives surrounded by the memories and debris of former lives – our own, those of people we knew, or of our ancestors. A lot of the entries set outside of York, for example, focus on the memory of the stones or of buildings. John Coopey’s poem ‘The Ghost of White Hart Lane’ ties ghosts to the memory of a physical place, a sort of collective consciousness of a shared history – shared with other people and with a specific place. In this case, it’s a football stadium – and there’s an attendant sense of loss as Spurs get ready to move to a new ground – but it’s a feeling that applies in countless situations. Meanwhile John Gilham writes about Roman sandals and the ghostly shades in the mud of the Thames, in his poem ‘The Fish-Eyes of the Dead’. These are perhaps Pressed by Unseen Feet‘s more credible kinds of ghost story in an anthology that contains plenty of stories of the shiver-down-the-spine variety, and poems haunted by loss.

In a smart combination of the traditional ghost story with the more subtle ghost-as-memory story, Andrew Brown delivers one of his excellent and touching tales from a nursing home. In ‘The Return of Uncle Clarrie’, Clarrie’s retelling of childhood trauma – and a ghostly encounter – forces a turning point in his life, in which he himself has barely played any part for decades.

Despite its long and solemn history, its famous city walls and countless tales of the dead, York has its amusing quirks, and so does Pressed by Unseen Feet: ‘Game Over’ by Ed Cooke. It’s a funny, off-the-wall warning about the dangers of technology and human nature, with a very British take on nuclear apocalypse. It’s a little dark, yet perfectly pitched. But it’s not spooky, ghostly or creepy, nor does it have any obvious connection with York or Yorkshire. But it is brilliant, all the same.

That aside, Pressed by Unseen Feet succeeds in giving the reader a taste of the ghosts we often create for ourselves: half-remembered lives, departed loved ones, and the flicker in the peripheral vision that we can never quite place. It hints at those we’ve lost but not really lost, sitting beside us, with their lives (or some sort of life) still going on around us, only occasionally seen. 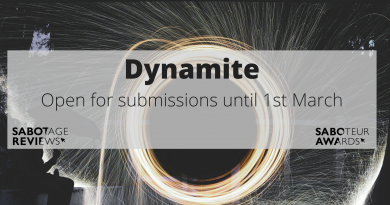 February 12, 2017 Editor Comments Off on DYNAMITE: a Saboteur Awards Commission 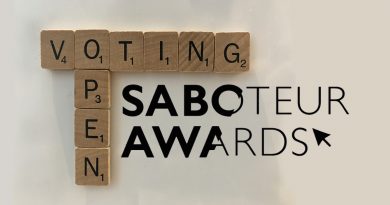