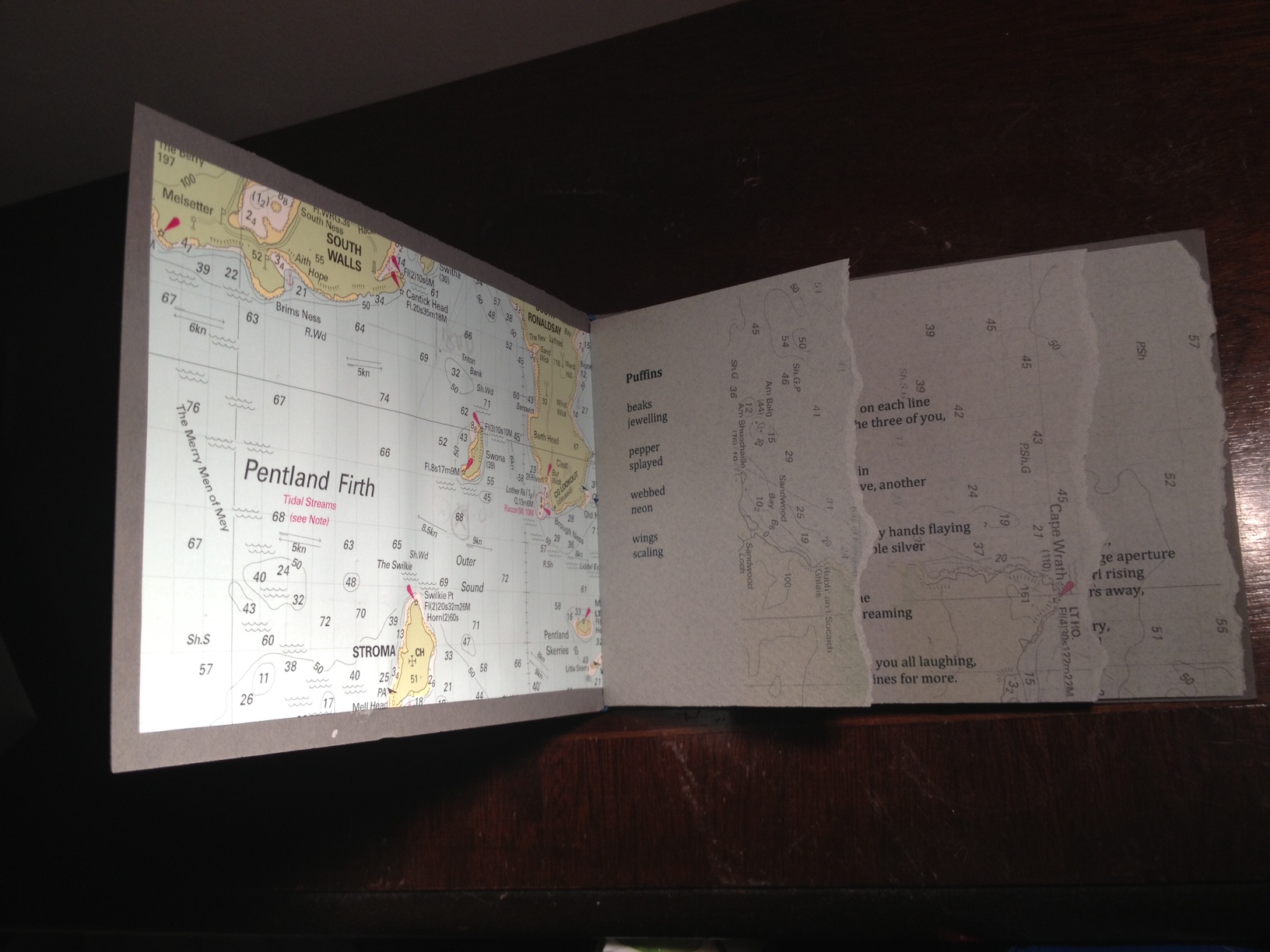 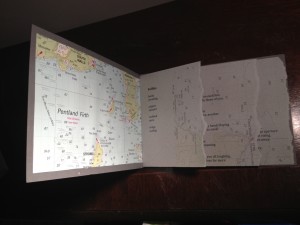 This small hand-stitched rectangular pamphlet is a delightful blending of design and poetry, which work together perfectly. I was not surprised to learn from Hymas’ blog that these poems were begun under the tutorship of David Morley and Deryn Rees-Jones, two poets I admire greatly. Not because Hymas writes like they do, but because I can see something in the noticing of detail, the certainty of the imagery, which I also see in their work.

As can be seen from the title, the poems are about the sea and its inhabitants. Hymas sails for relaxation, and these poems are very clearly the work of someone who hasn’t merely googled these creatures, but who has observed them at close quarters with a poet’s eye. They are also excellent examples of Keats’ notion of negative capability, for Hymas stands back and lets the reader see what she saw.

The book is made of a pleasing grey green card, under-printed with scans of sea maps. The endpapers are coloured sea maps glued to the inside of the card. The pages are hand torn and in stepped widths so each half of the pamphlet looks like the surface of the sea, with ripples or waves, and the book moves in the hand. It is bound with blue twine which mimics ropes used at sea and knotted in sailor’s knots. In such a seductive form, it is possible that the poems might not be noticed as poems which merit attention. So once playing with the book has been relished, the reader needs to appreciate the poems.

The first poem is ‘Puffins’, and it is only 8 well-chosen words, one word per line so each one has its proper attention. I particularly like the imagery of ‘beaks/ jewelling’ and ‘webbed/ neon’. The next poem, ‘Iceberg’, is plumper and the shape also matches the topic. Since the Titanic disaster, it’s hard to think of bergs any other way. Hymas’ berg is ‘so small it might have been nothing’, which immediately points away from the world’s most famous chunk of sea ice into something far more subtle, though the threat is there all the same in the imagery: ‘shadow of a gull … dark grey fin’. This poem excels in its use of sound too, with subtle half rhymes and alliteration helping to create the impression of the flirting with the surface movement of this ‘barely-there-then-gone phenomenon.

Another wave flows by to ‘Mackerel Fishing at Holy Island’, for which Hymas uses to her advantage the whole spread of the page to create wave shapes with the layout. The form also exploits the different roles in the poem, the fishers pulling in lines of mackerel and Hymas struggling to get them into the boat, by alternating the moment across the page. I enjoy the compound words she deploys here: ‘glitterstrobes’. ‘ungraspable’. The poem is full of action and sound. ‘Jellies’ which follows it, draws on popular culture for its imagery. The jelly fish, oddly beautiful but dangerous, are compared to ‘B-movie’ aliens and ‘punks’. The poem is short but balances perfectly on that dichotomy between ‘allure and repulsion’.

‘Tidal Curve’ is the first poem to occupy a whole page, as the paper is staggered in width for the wave effect. It’s a sea storm, again with some striking imagery. I particularly liked the verb choices; ‘clouds rankle’, ‘fields flecked’, ‘greedy gobbling’. The centrefold poem is a longer one across both pages, which considers the small creatures, shipwrecks and other things that are hidden at the bottom of the sea, the ‘life unaware/ of the wind above pressing these currents’. (‘The Census of Seamounts’). Having the sea bed as central presence is fitting. I do like the way that even in such a small book there is variety of topic and form, from the vastness of the ocean to the tiny hermit crab.

Next there are poems about Guillemots, The Basking Shark and the Selkie, all based on personal observation.  I love the word choices in ‘Guillemots’, the contrasts with hard words like ‘chiselled’ and ‘razored’, with ‘feathering lift off’ and ‘black silk bullets’, the latter phrase encapsulating the dichotomy between their animal beauty and their hunting habits. Because Hymas never sentimentalises the creatures, the reader can appreciate them as they are. ‘Basking Shark as Rock’ again builds contrasts, between the shark seen today, ‘a liquid shadow under water’ compared to the one the previous day, ‘corckscrew chancing’. In a comment on the slaughter of sharks for human medicines, Hymas has this one ‘lashing incomprehensible curses’, making human needs seem selfish and small.

‘The Selkie’ is a persona poem which plays with repeated lines and phrases, subtle rhymes, and clear-eyed observation. The collection ends with the only really personal poem in the set, which is about Hymas’ sailing glove, ‘Sail Palm’. It’s a fitting ending, to show the reader the cumulative effects of the sea on this vital piece of equipment. The poem is playful:

‘The caul of worn leather doesn’t glove
my fingers – they tentacle freely.

Unfettered by the GPS, NavTex,
this centuries-old tool
smells of the trench so deep
its creatures are unknown to us.’

This is a very fitting end to this fathoming little book. I am going to treasure my copy. 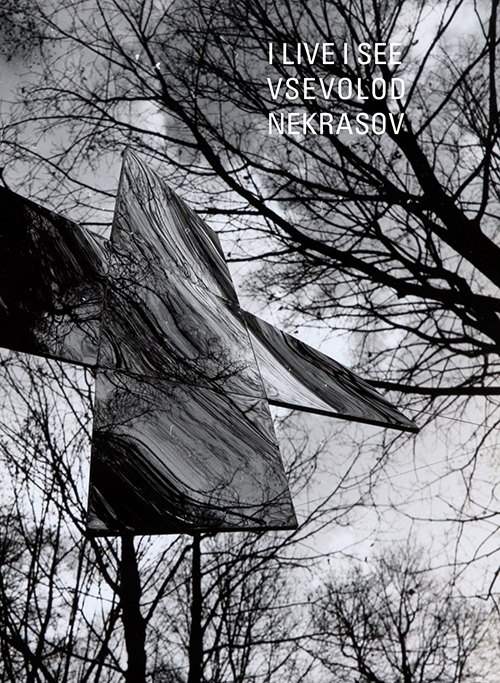 I Live I See by Vsevolod Nekrasov (trans. by Ainsley Morse and Bela Shayevich)

December 22, 2014 Editor Comments Off on I Live I See by Vsevolod Nekrasov (trans. by Ainsley Morse and Bela Shayevich) 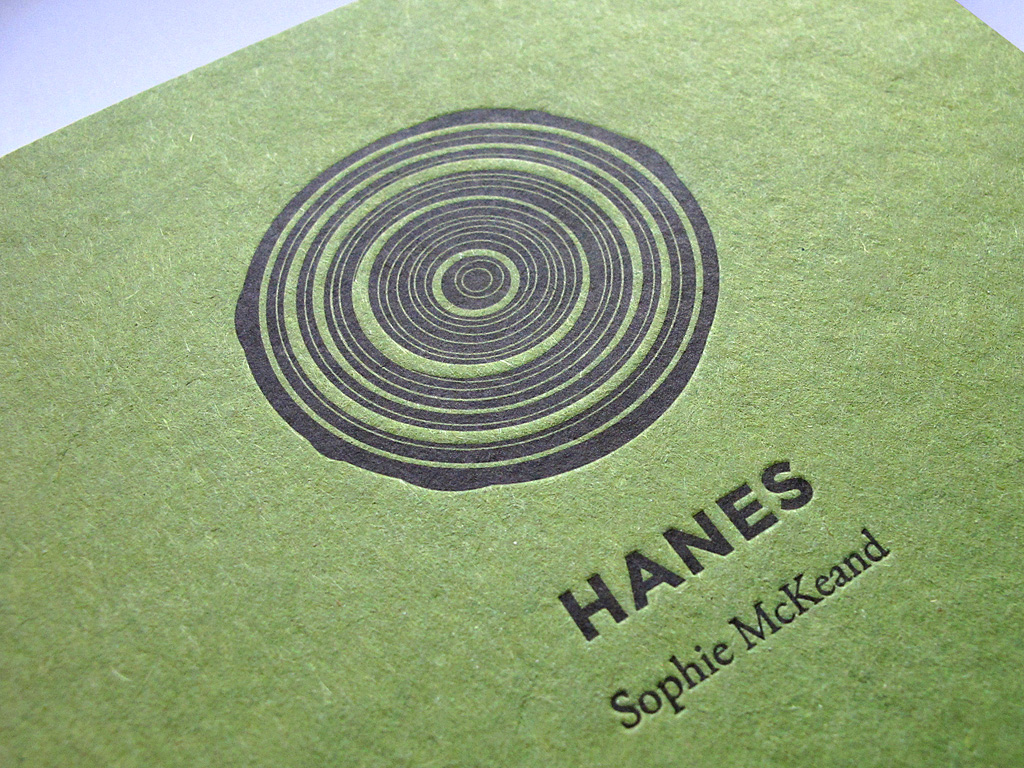