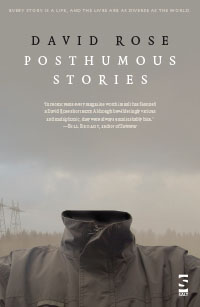 Posthumous Stories by David Rose, published by Salt, runs to over 200 pages and comprises sixteen pieces of fiction. The title may mislead some readers: these aren’t stories collected together to memorialise a deceased writer – Rose is very much alive. Rather, as the blurb on the jacket informs, the stories were ‘written over the past twenty-five years’. The collection offers up a mix of tales, threaded together by an array of characters (often unnamed) who share feelings of detachment and isolation in their distinct and differing lives. This was my first reading of Rose’s work – his novel, Vault (2011, also published by Salt), was well reviewed in The Guardian, with the reviewer drawing attention to ‘Rose’s gift for creating scenes that embed in the memory’. This gift is also apparent in Posthumous Stories; the collection is challenging, even playful, with some passages deliberately constructed (I suggest) to overwhelm or test the reader. 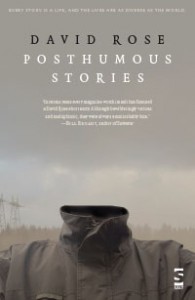 This obfuscation is evident in the stories clustered with references to classical music and the art world which, for this decidedly uncultured reader, initially led to a sense of disengagement from the text. See, for example, ‘The Fall’; a story about a germane eco-warrior-of-sorts, who is part of a mysterious, religious sect. When he is not engaged in playing havoc with railway points, thus disrupting the transportation of nuclear waste, or finding sexual release with lovers who come and go, he harbours an

impulse, almost a thirst, to listen to some Mahler. […] I chose The Song of the Earth – Das Lied Von Der Erde – in the Kathleen Ferrier/Bruno Walter recording of 1952; Ferrier’s swan song. […] The ripe and astringent chromaticism pointing up, cushioning the frail voices. Petulant scherzo of ‘The Drunkard in Spring’. Then the long-drawn breath, almost stasis, of the orchestral bridge to the final song, ‘Der Absched’. ‘The Farewell’.

The structure of this passage is polished and beautiful; however, whilst I might recognise some of Mahler’s pieces were I to hear them, the detailed references to his work and the emphasis on nuanced, musical expression left me with the residual impression that a particular way of interpreting the text, or understanding the central character, was closed off to me.

However, when reading the collection as a whole, it seems that Rose plays with the concept of over-emphasising aspects of art and culture. For example, in ‘Viyborg’, Mahler is referenced again, along with other composers, as well as descriptions of paintings in the National Gallery. Such detail at first led to the feeling that I could not understand or empathise with the central character, being unfamiliar with the works – but this is the story’s point. The story reads as an editor’s review of a work-in-progress, and contains narrative interjections which highlight the disjointedness a reader might feel when trying to understand the piece: ‘(opus 9, as if we need to know)’; ‘[c]larification would have been welcome.’

Similarly, ‘Rectilinear’ is a curious tale that again plays with the art and its representation. The story is about a man so obsessed with clean, Modernist architecture that he lives in a house shaped like a ‘perfect white cube’. He allows his personal life to fall into disrepair because of his fixations: when his partner begins to wear dresses with ‘vivid […] primary colours’, he begins ‘to suspect her of having an affair’.

In ‘Dedication’, Rose again delves into the theme of dissonance between private knowledge and a public desire to categorise and consume art and music. The first half of the story takes the form of an interview with Stevie, a man to whom a piece of music was dedicated when he was a child. Public interest in the piece (prompted, possibly, by the composer’s suicide and ‘preoccupation with children’) compels the interviewer to ‘track[…] down’ the now adult Stevie, in order to discuss his take on the work. Stevie resents that the piece ‘rather blighted one’s life’, and the interviewer’s detailed questioning and interpretation of the music jars rather comically, and sadly, with Stevie’s reluctant reminiscences:

– I had only remembered the crash of the last chord and my mother’s curses at trying to play it. […]

The second part of the story is a gathering of Stevie’s childhood memories of the composer, written as a stream-of-consciousness: ‘his proud lone B    awaiting    whisper of blade crackle of hairs on his throat as it kisses into flesh […]’. These final passages offer a raw and visceral coda to the formalised, expert questions of the interviewer, reinforcing the idea of a real, lived life beneath the art that represents it.

It is a concept Rose returns to in ‘The Fifth Beatle’, a sweetly drawn tale of a housewife who happened to be pictured in the infamous Abbey Road cover (I know what this picture looks like). The housewife’s life, told in blunt, spare prose, is juxtaposed with a distant, staged description of the scene. The woman’s main thought when she realises she’s been snapped in an iconic image is ‘I wish I’d taken my overall off’. She recalls that she didn’t quite understand what the Beatles were doing, or who they were. I had a similar feeling: Posthumous Stories offers the reader an intriguing, challenging, and occasionally baffling set of tales, which require patient unpacking in order to be fully appreciated.