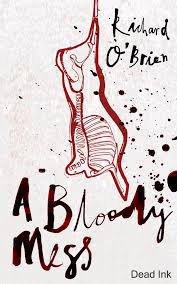 You dust the beauty of a death as yet unnamed
irregular, reveal a new age of the old. All hail
the self-stained bone-girl……

While tourists flock to the Jurassic Coast, it feels right to hail Mary Anning. It is not original to remind folk of the radical interpretation of history: that it is the study of the past with a view to applying its lessons to improve contemporary society. If only this was realised fewer lives might be lost, yet history for some is academic, vague, irrelevant. In Richard O’Brien’s A Bloody Mess, history is personalised:

How can I say what made me miss the embers
as I came to you, bun-heavy, fingers derelict with yeast?
Our sheets that night were warm as plague, a pie-crust,
and I felt your sleeping ribcage rise like loaves.
Outside, they didn’t know our names….

[Confessions of an Accidental Arsonist]

In O’Brien’s poetry it feels as though the names ARE known. History is made real and engaging, and in ‘Actaeon’, ‘Victorian Pornography’, ‘Munch’s Cock’ and ‘Prince Henry’s Autopsy’ this is a rewarding engagement. It would, however, be wrong to characterise his themes as being entirely in the past. They are very much in the felt present:

But you took my heart to the helipad
and you bundled it inside
with a wad of cloth packed in its mouth
and another round its eyes.
It seems to me, considering
we might want different things –

but I want you, and still, and that’s what stings.

Empathy prompts these poems to take elements from history and make its lessons as contemporary as love’s loss and the loneliness it leaves. The poet takes us, in poems such as ‘Song of the Rose’, on a feeling journey:

In the gardens of the past
the tender roses flower
my friend entwines their stalks like grass
and plaits them in your hair;

in her mouth is the other
and its slow, sweet scent
rises above two lovers
now whose love is spent.

John Donne’s words (“And that this place may thoroughly be thought / True paradise, I have the serpent brought”) are the epigram for the book. The ‘paradise’ is love itself and the serpent evoked herein, at least in part, is its loss. It is what ‘stings’.

The stress-timing of lines (isochrony) is key to the new formalisms so insightfully evoked by Fiona Sampson in her work Beyond The Lyric, which maps out the rich variety of contemporary poetics. O’Brien’s ‘temporal’ rhythms match the moments he, and we, engage with in A Bloody Mess.

Just how neurotic do you have to be
To tie a knot in a valance? you say

They told her that the world would be her oyster –
salty, overpriced, and gone too soon

[More Sharks Than Ever Before]

I cannot fault or blame
its aspirations;

it died for hunger, not for love,
though in the same location….

These temporal moments become realisations of jealousy, of lost hopes, and of awareness. They are coupled with twists of phrase and particularized observations all formed through regularity of rhythm and effective rhyme to strike directly.

Alone tonight, I dress up in your heartbreak.
I’m draped, ungainly, in its crumpled chiffon.

and when its done, the done-for ones
head home alone, bereft;
but I will wait for you
until even the leftovers have left.

This sets a new standard for ‘bad day’.
The printers loose a liberty of black;
his liver inks a river through the tracts
and where the gall should be, a withered sack.
This is the Press at a march pace.
This is a rock and a hard place.

O’Brien’s use of cliche in this way revivifies the phrase and, although this is not his most subtle work, there is something to admire. The jaunty rhythm reminds me of the monstrous affair in the folksong ‘King Knapperty’, or Charles Sorley’s jauntiness in his devastating ‘All The Hills And Vales Along’, where the beat is set against the horror of the soldiers marching off to Verdun and the Somme. I can look into O’Brien’s poem and beyond the mourning related to its subject is the despair that many felt at the betrayal of New Labour. This matches the humour and wit of the opening poem, ‘Plea to Future Philanthropists’:

consorting with consortiums, ex-cons,
funding hedges I can’t prick my fingers on,

or money sunning in some beach retreat
(technical Virgin, undeclared in Kent)?
With so much hanging in the balance-sheet
There is an ocean between ‘broke’ and ‘bent’

Something of the times, as we approach the next election, makes me enjoy this declamatory tone, and, I suspect, others will enjoy it too.

I shall leave buyers of this book to engage with the thoroughly accomplished ‘Four-Coned Ruth’, which takes an interesting angle on perception: what we do not see, what we might.

Then imagine a feeling, next to which
the times all tension spilled
to a shiver so pure it verged on air
would seem like a dentist’s drill….

This feeling moment returns us to ‘Mary Anning’:

This is the old age of the new
Forgive them, lord. They know not what they do.

February 14, 2012 Editor Comments Off on Three Love Poems for the Romantically Disinclined