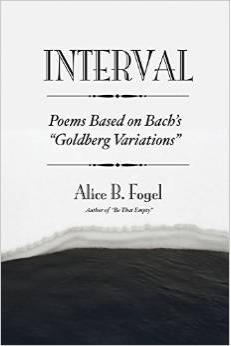 It’s hard to grasp, least of all by any mental logic, how the mathematical manipulation of sound into a structure of combined and ordered pitches can break your heart.

Alice B. Fogel’s Interval opens with a preface on her poetic process, explaining how she went about creating a comparable ‘mathematical manipulation’: a translation, or re-imagining, of Bach’s Goldberg Variations in verse form. Fogel unpacks Bach’s structure:

The entire Aria is repeated at the end, and between these two presentations are 30 variations, making 32 parts in all. Symmetrically, each variation itself consists of 32 measures, divided into two parts of 16 measures each.

Her continuing analysis of the Variations‘ complex musical body impresses me with the focus required to mirror them in verse. Each of Fogel’s poems is made up of two 16-line sections, in which “the verbal variations reflect their corresponding musical variations in both direct and subtle ways, […] such as rhythm, temperament, tone of voice, mood, or phrasing.’ So far, so fascinating, although I wonder about poems with a preface: do we need instructions to access this work? Can these poems stand alone, or must you listen to Bach while you read them?

I find that I do want to listen along, and this changes the reading process. Fogel’s poems open up like a lyric sheet, as a soundtrack of Bach weaves around them; they do indeed correspond with each piece’s structure and pace. ‘Variation 1: Yhwh’ is full of twirling internal rhyme:

With my body like a brine spiraling I stirred
the silence till it echoed apart from me, and where I

was deafened I hummed their frequencies.
From a floating ground I fired off rounds of clouds

flaming and where they burned I brewed the rutilated
light until it refracted in the wells between comets rocketing.

This is womblike, as if a god – ‘Yhwh’, Yahweh, Jehovah – is gestating in deep space. The poems quickly begin to build landscape and mythology, each having a different speaker, indicated by the title. ‘Variation 3: Snapping turtle’ imagines an icy lake – ‘As if / by dreaming ice might cast its million limbs / over that surface above’ – then becomes a meditation on fertility, via the thawing of ice, as the turtle dreams: ‘To nest once in heat. To hatch and be born.’

‘Variation 4: Child’ features a shift in tone, shorter words, innocent-ish, while ‘Variation 7: Girl’ is irreverent, contrasting with the more romantically-lyrical voice at the start of the collection:

If I ever have a daughter here’s all I’m going to do:

say, That’s nice honey, or You go girl, or whatever
is hip when she’s 13 and let her pierce anything she wants.

Fogel successfully changes her poetic voice from one variation to the next, whereas many poets establish one dominant ‘voice’ and stick with it. It is refreshing to see this multiplicity at work; I could not predict, from the opening few poems, how the tone would shift.

‘Variation 28: Transplanted heart’ expresses swaggering pain, dividing a collective ‘we’ into more differentiated roles, as the speaking ‘heart’ is moved from a dead body to a live one, resurrected:

Didn’t I twice beat time? Now when I flow into myself her him, heart
and soul wave and undertow, we relive

every dream that died in his crushed head, and dreaming
she calls out his name, the one we know by heart.

more puzzle than plan, more flight than counterweight,
the perfect grid of abiding piers upon which you

There’s a risk of over-abstraction in ‘the moving force / of brilliant ephemera’ – the awestruck gargle of transcendence – but that ‘grid of abiding piers’ is tangibly complex, suggesting musical staves, spinal columns, and passages out to sea. Interval is under great pressure to succeed within its prescribed structure, and at first I wondered if it would be more than a lucid commentary on Bach. Yet these poems stand in their own right. Some of Fogel’s voices or roles feel more fully convincing than others, but she creates these variations with exuberance. A versatile, ambitious book.