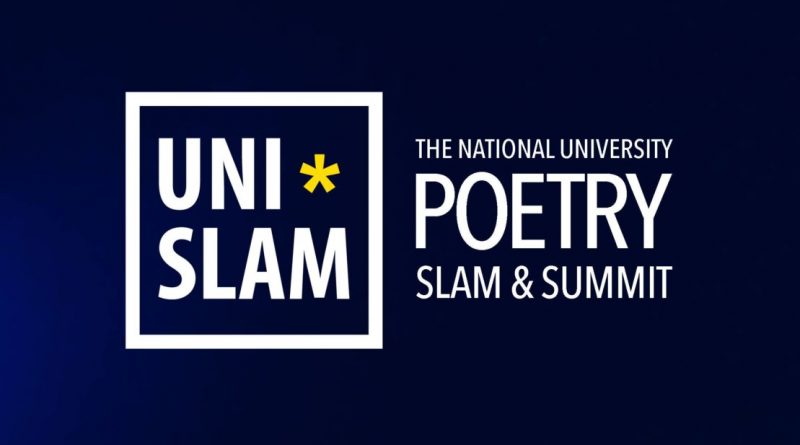 What an event UniSlam is! For those who don’t know, UniSlam is an annual team poetry slam competition where universities across the UK send a group of poets to compete for the UniSlam championship. What makes UniSlam different from a lot of other slams is the community nature it inspires, and this was evident in this year’s final. Whilst there’ll always be a competitive nature to poetry slams, being at the final at the Old Rep, Birmingham, with a sold-out audience cheering and chanting and sending love to every single person who stepped onto the stage, it didn’t overly matter who won. It was a night of celebrating poetry. It has become a mantra of poetry slams worldwide, and was pointed out numerous times throughout the night, that: The point is not the points, the point is the poetry.

Nevertheless, there was a competition taking place. The final took place on day three of the UniSlam festival weekend. By this stage, there had been prelim rounds and semi-finals to determine which universities made it to the final four, and those four universities were Birmingham, Durham, Leeds and Strathclyde. Each team had to perform four poems over the course of the night judged by an esteemed panel of poets composed of Hollie McNish, Dizraeli and Melissa Lozada-Oliva.

Leeds started each of the four rounds in the final, encouraged by a wonderfully energetic cheering section before their poems, including chants like ‘Spit it now, spit it good, spit that poem just like you should’. Their four poems over the course of the night tackled the subjects of home and mother tongues, loving your phone, sexuality and race. All of these poems had immense power behind them, with each of their four performances showing a different side of the team’s strength. For example, showing off their emotional prowess in their first group piece before bringing in humour with their poem about loving their phone. Leeds ended the final in 4th place which certainly caught the audience a little off guard. Watching their performances (and having the benefit of re-watching them due to filming all of them) one would suspect that ultimately time penalties and the length of their poems may have cost them some vital points. Though as mentioned, the point is not the points.

Next in the order of teams was Team Durham. Now is a good time to mention that what made this final so enjoyable was the range of styles between the four final teams. Leeds showed a strong performing background and commanding stage presence throughout their four poems. Durham’s poems leaned strongly on the strength of their writing. Considering the stigma surrounding the performative nature of slams, Durham’s approach felt like a refreshing change of pace. Subject-wise, running through all of Durham’s pieces was the idea of family. One of their standout poems, and overall standout performer of the night, was Prerana Kumar. Her poem ‘Ocean People’ helped her win the Verve Prize for best individual poet. Durham ended up taking third place in the final.

The team from Strathclyde were up third in each round and showed a great mix of both writing and performance skill. Their first poet up performed a piece about friendship with a great mix of entertainment and self-reflection. Their final three poems took different approaches to looking at trauma and loss. Their last poem, a duo piece, ended their set with an uplifting look on how to deal with trauma and move on in the aftermath: ‘Your suffering is not source material. This is not the only story worth telling’. Last year Strathclyde missed out on making it to the finals by 0.1 points, so to follow up with a second place finish in the finals is quite an achievement for the team flying the Scottish flag in the finals.

Last in each of the rounds were the reigning champions, Birmingham. If there was any pressure on the hometown team to win it didn’t show within their poetry. Like the past few years, despite a change in their roster of poets, Birmingham’s team showed off a strong performance style which was able to get serious when they needed, or humorous to change it up. Slam has unfortunately generated a lot of negative stereotypes around ‘gimmicky’ poems being the most rewarded, but there was nothing gimmicky about what Birmingham performed. Starting strong, Birmingham’s first poet talked to us about loss, focusing on the loss of their dog. There was then a beautiful performance in their second round on issues of anti-Semitism. Their third changed up tone with an amusing tale about letting a mood ring dictate your feelings before they ended the final (very fittingly) with a group poem about where each of the team are from. You can watch their final poem here.

As is the nature of competition, someone had to take home the trophy. Birmingham proved they were a great team throughout the weekend and especially in the final, so it’s very easy to call them worthy winners. Their joy at coming first was evident as their celebrations took place on stage. And whilst the night ended with the announcement of them as winners, the night was rightfully not about them. Hosted by Kat Francois, the energy and love in the room was evident from the start and each team gave incredible performances. As cliché as it is, they truly were all winners just for getting on that stage.

Performers set a high bar with their talent which the judges had to try and match as they performed feature sets over the course of the night. Dizraeli’s musically influenced writing was a joy to behold as he took us into the first break. A highlight was his poem about his mother, which he encouraged the whole of the Old Rep theatre to join in with. Hollie McNish started off the second half and showed us why she is so well-known and much-loved in both the poetry world and just in general. From poems about bricks to poems about her shoulders, she showed off her writing as well as her likability with expert skill. Melissa Lozada-Oliva took the role of headliner of the night and continued the sing-along theme established by Dizraeli by getting the whole theatre to sing the first verse and chorus of Kelly Clarkson’s timeless hit ‘Since You’ve Been Gone’. Her set had the audience falling in love with her both for the skill of her writing and the likability of her personality. Both were brilliantly demonstrated in ‘Poem For Fucking A Fish’, as can be seen here.

The point of poetry slam has never been the points. That’s not to diminish the success of the winners or ignore the work they put in. It’s more a reminder that poetry is about the poetry. Without trying to assume what the whole audience felt, there didn’t appear to be an overt desire to see who won the slam, because it wasn’t about that. Sure, people wanted to know but more than that people wanted to see good poetry. They ended up watching great poetry. The judges delivered expert sets which showed why they are regarded in as high esteem as they are. Each team in the final showed off their skills too, showing why they made it this far and why the future of poetry is going to be great. So congratulations to every poet involved and everyone behind making UniSlam happen, they put on a hell of a night. And congratulations to Team Birmingham for winning UniSlam 2019.