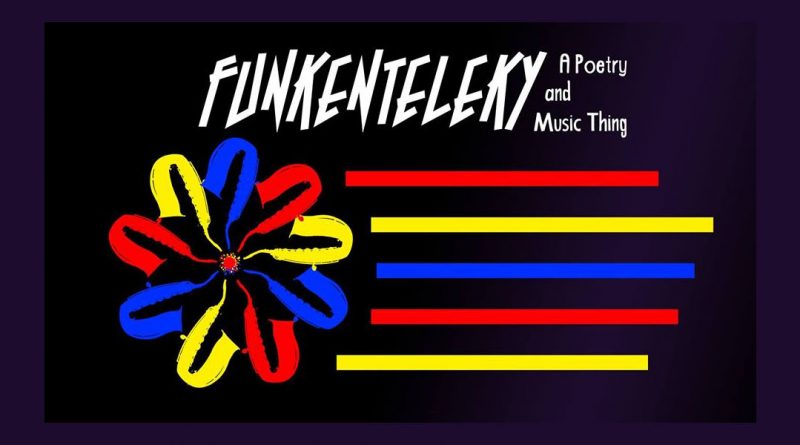 On Sunday February 17, 2019, Birmingham’s Verve Poetry Festival came to a gloriously entertaining end with a special edition of Jack Crowe and David Ferris’ defiantly quirky night of poetry and music, Funkenteleky. Usually taking place at the smaller venue of The Edge in Digbeth, this edition lit up The Old Rep Theatre, which played host to all of the festival’s events throughout the weekend.

Funkenteleky’s unique premise is that poets are accompanied by a four-piece jazz band. Before their sets, each of the performers are given twenty minutes with the band to prepare, before they unleash the resulting set of poetry and music on the audience. The band for June’s event was led masterfully by 2018’s BBC Young Jazz Musician of the Year Xhosa Cole on the saxophone, and featured Ben Lee on guitar, David Ferris on organ and William Weir on drums.

The four poets taking up the Funkenteleky mantel this time around were Barbican Young Poets alumnus Kareem Parkins-Brown, Birmingham poet and theatre-maker Bethany Slinn, Birmingham spoken word legend and young-adult novelist Steven Camden, aka ‘Polarbear’, and Button Poetry-endorsed Birmingham poet Jasmine Gardosi. Each of these four utilised the jazz band in a different way to suit their individual styles of writing and performing.

Kareem Parkins-Brown spoke passionately about the effects of ‘regeneration’ on poorer London neighbourhoods, and about the community of his local church, accompanied by counter-melodic, deliberate trills and beats. His third piece – ‘another brudda moves to the borough, tries to impress but offends me’ – saw him take on the voice of someone attempting to blend into the urban landscape but failing miserably. His use of the word ‘yah’ to split up the increasingly ridiculous statements that made up the poem was met by on-going laughter from the audience.

Bethany Slinn’s set was marked first by themes of activism, then with complex family relationships. The musicians responded with questioning, swelling melodies, before stepping back a little into atmospherics, to allow the feeling of the poems to clearly come across. Slinn was initially hesitant to share the personal material but reminded herself of their importance by noting ‘the personal is political’.

Polarbear’s set was, impressively, comprised of just one, long narrative piece, ‘Alexander the Grape’. This was in-line with his recent preference of writing young-adult fiction over spoken word. Polarbear has always been a story-teller, and his Funkenteleky piece, written over a decade ago, showed a true love for stringing a narrative and characters together. The music elevated the work into something special and captivating, making new a poem far older than the event at which it was being performed.

The evening was rounded off in extraordinary style by Birmingham spoken word powerhouse Jasmine Gardosi. Her first piece was the infectious ‘Dancing to Music You Hate’, featuring the catchy repeated line ‘Pretending to be straight/ is like dancing to music you hate’. The ‘Funkenteleky’ version of this piece saw the refrain followed by a musical crescendo, allowing the musicians to showcase their extraordinary skill in jazz improvisation, while Gardosi bounced around the stage with uncontainable energy. Jasmine’s last poem, a performance debut, saw her start off with no input from the musicians whatsoever, only for them to ease gently into the performance when the time was finally right.

Crowe and Ferris did not let a bigger venue push the night towards the mainstream. The latter of these was the evening’s true last performer. Each audience member was given a piece of paper upon entry to the event, on which was a “launch code” in the form of a mobile number. At the end of the night, a video (which we were assured was “live footage”) was projected onto the back of the stage, showing the satellite emerging from the roof of The Old Rep Theatre and rising into the sky, to broadcast poetry across the UK. People were then instructed to text *ahem* launch their thoughts about Verve 2019, in some form of poetry, to the number on their paper. Two of Verve’s organisers were then invited onto the stage to read out, from two “receivers” (mobile phones fastened onto decorated pillows), the lines that had been sent in. Every single one was heartfelt and positive.

When asked to provide some background to the more fantastical elements of the evening, Funkenteleky co-organiser Jack Crowe had this to say:

‘Funkenteleky is all about a spirit of collaboration in whatever space we’re getting it on – and the audience are part of that as much as the performers. We launched our poetry satellite via hi-tech crowdsourced poetry as a way of including all attendees at a venue the size of the Old Rep. We knew we were the last event of the festival, so we thought it was a nice idea for our fantastical narrative to ask people to look outwards and think about how Verve and how poetry might interact with all of Birmingham going forwards. Also, making a 100% real, full operational satellite and launching it off the roof of a Grade II listed theatre was well fun.’

The Funkenteleky Verve Special was the perfect way to round off an incredible weekend of poetry and spoken word. Showcasing some of the best talent the city and the wider UK has to offer, the event reminded the audience, who came from far and wide to spend the weekend at the festival, that Birmingham spoken word isn’t just an annual occurrence. Birmingham’s scene is alive and kicking throughout the year, and it is demanding everyone’s attention.