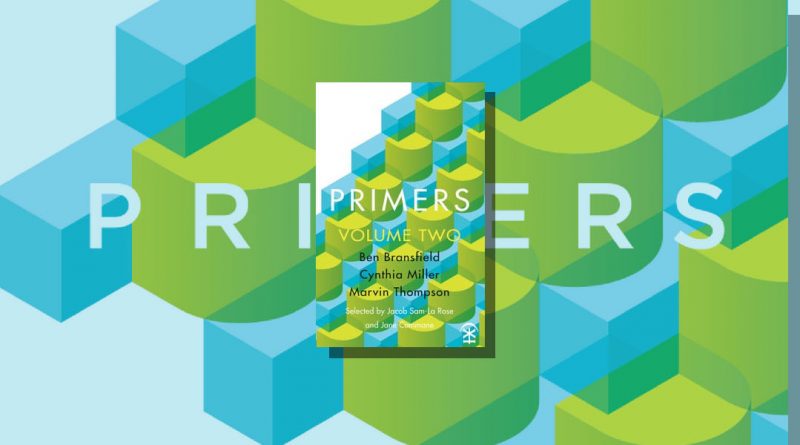 The Primers scheme provides an important platform for emerging poets who are seeking to develop their writing and build towards a full selection of poems.

Ben Bransfield’s sharply observational poems focus on his growing up in Shropshire, and on his family – his granddad, for instance, whose greenhouse with its “panels green and spidering” is the “best place to hide.” He is “our sentry of our underdog, our national trust”, seeming defender of badgers from trappers, and imagined by the poet, “… in his camouflaged tent /… alert at the cut of an engine, a distant bark.” Fond nostalgia is undercut by darkness. ‘Broseley’ proceeds at first as a series of acute observations of place, “… the Iron Bridge, a napkin-ring over the Severn; / the beacon, pinned to the top of the Wrekin”. Its conclusion finds “ … through the window, just beyond the net, / Granddad tying his last wish to the banister …” The stark ‘Garden Twine’ provides a continuation:

(found) down the back
of the tumble dryer …its three ties –
bowline, clove hitch, slip –

a prayer for each of us grandkids.

In ‘SupaSnaps’ the poet’s mother (?) flicks through newly-developed photographs, “You taught us to hold by the edge / to leave no smudge”, although the children never touched the negatives, ‘those genesis proofs / where we were X-ray, on fire …’ as if they were dangerous; a primal fear? The idea of courting risk recurs in ‘Amanita phalloides’, a poem about male infertility, “Though I cannot bear a child of my own, / I might one day have a Death Cap Mushroom.” Who could have predicted that? There is mordant humour when the ‘father’ realizes he may not be able to protect the child, “I still get nervous every summer’s end, / when the druids and foragers might creep”, with an aim to eat it, even though “no known antidote exists.”

Cynthia Miller’s heritage is Malaysian-American and her work is expansive and inventive. The sequence, ‘Yellow’, contains poems addressed to and about the poet’s mother and begins with an elegant ideogram that “means yellow”; other associations: “honey dragonfruit, custard apple salted durian, a wet star cut true.” Descriptions of the mother are alive, rhapsodic; “My mother is sulphur fruit, sharp and bright / as lightning in a dry season, a whole wildfire blowing hard out ahead, / clearing the way.’ There is ambivalence to the colour ‘yellow’ and its connotations, ‘ … ancient and imperial / … the end of a purpling bruise / that is the centre of the world’. Dropka’ is a beautiful sustained analogy of a father as a nomad, “He drinks butter tea, knows his way around a saddle, / turns the living room into an open rangeland.” We learn that “dropka means ‘people of the solitudes’ / as if solitude was an open country” and the way that the father “loves / is the way a horse makes a break for it, / steaming, impatient, expectant, body corded tight.”

‘Scheherazade in the Care Home, Parts I and II’ are twin prose poems which explore heritage and memory.  In Part I, a litany of questions begins with “& do you remember”. I read these as being from a mother to a daughter; inconclusive, they have an edge of threat. The mother grasps at memories, to keep them alive, just as in the legend, Scheherazade told stories to keep herself alive:

& do you remember running for the train in the night –

& do you remember the soldier’s hand at your throat –

The second poem, from the daughter’s point-of-view, is a tender portrait of the mother in the home, “a tiny slip of a thing in her zinnia print overcoat”.

Marvin Thompson inhabits his poems – brilliantly – via various personae. They are mostly energetic dramatic monologues delivered as sonnets or sestinas e.g. Severn Sisters. It’s no mean feat to sustain a narrative sequence of seven sestinas using the same sequence of repeated end words. Severn Sisters warrants several re-readings to catch the various voices and to follow the narrative threads. Especially compelling is the mixture of tenderness and cruelty in ‘Dear Martina’: “I drank for two, your dad hogtied in the dark, / … birdsong stirring while I sang, ‘Summertime …’

The format of ‘An Interview with Comedy Genius Olivier Welsh’ is impressive: seven sonnets, each headed up by an interview question e.g. 1. “When did you first know you wanted to be a stand-up comic”, 4. “What are your thoughts on comedians using the N-word?” The poems allow diversions into the stand-up’s (and the poet’s?) memories: of family, school, past gigs—of the overt and covert racism permeating the clubs and the resulting capitulation to varieties of ‘whiteness’ that ensures success. Thompson ‘ventriloquises’ the stand-up, Oliver Welsh, whose stage alter-ego is Tommy Mann. In 3. What’s the truth about how Tommy Mann was born? we find that he has been created to deliver the riposte against the fall-out from Brexit:

Have I Got News For You hosted Welsh’s “protest / of ironic racist quips in Gramp’s royal blue / a jacket Tommy wore with a puffed chest.” When Tommy’s “barbs about refugees’ bums” were booed at Welsh’s first pub gig and this impelled, a change of image ensued, “…I studied, gave his voice more plume, more bite / and learnt his swagger: / Tommy’s path was lit. / To date on You tube? Nine billion views.” We all know about the tragedy behind the comic’s mask—it has been played out many times. Welsh’s black “Oxbridge Bernard Manning”, took him so far until his “bright skies” fell ‘after raging about Saint Obama’s death” which offended Parliament and “black activists (who) denounced my very breath”. Another recapitulation as drag act: “Tommy raged / and turned to warpaint …” Personal tragedy, the death of an earlier love leads to a dénoument that reminds me of creepy films and stories where a ventriloquist’s doll takes over its master: ”In pain, I lift my pen in Tommy’s grip; his wrath was a mask behind which I cried.”

Such is the flair displayed by each of these poets that I can only wait eagerly for their individual collections.