What is particularly interesting about The Flood is how it translates the live storytelling experience into a digitally portable medium. For instance, the first story ‘Dr Who and the Water’ was performed by Superbard (aka George Lewkowicz) at the Birkbeck Writer’s Hub October Hubbub last year, and he plans to continue performing stories from The Flood around the UK. At the moment, the ebook features three stories by Superbard and illustrations by Maria Forrester, accompanied by music and narration from the former. The latest update in iBooks added music and narration for the third story, ‘The Ark’, plus a burst of social commentary in the form of new song, ‘Two by Two’.

A complaint that is sometimes levelled at digital storytelling is that it resorts to gimmickry, privileging the manipulation of form at the expense of good stories. Thankfully, there is no danger of that in The Flood. Opening story ‘Dr Who and the Water’ nicely sets up the arrival of the titular flood. Rather than spend time trying to explain why the flood has happened, the story self-assuredly brings the reader into a remoulded reality where London is ‘Venice with no buildings’, and everyone is still unconcernedly going about their business, including watching the Doctor’s onscreen triumph. (I would quibble with the story’s referencing a particular Doctor Who episode though, since that so precisely dates the story’s time setting.)

‘Brixton’s Afloat’ is my favourite story of the three, due in no small part to its catchy refrain (vocals by Nikki Blemings):

The story itself is told in a familiar form, making use of diary entries, but even the tiniest detail like how the narrator begins each entry by describing what kind of tie he wore that day (the tie is later dropped in favour of jeans, then waterproof trousers, and finally a wetsuit, as the flood progresses) lends a twist, especially when one is experiencing the story aurally.

As for final story (for now) ‘The Ark’, it manages to evoke a blend of pathos and disgust simply from the device of having the characters sit down to play a game of bridge. The addition of song ‘Two by Two’ just before the story emphasises the class aspect of the card game choice, but there is also something pitiful about a group of people (illustrated as animals though, which is apt on multiple symbolic levels), the ‘worst of humanity’, carrying on as if they were not stuck in a sinking ark. Superbard also displays his gift for live storytelling in the story’s closing line: ‘and then for the first time, they started to breathe’.

Frankly, if The Flood were to just finish on that note, I would consider it a satisfying book. Fortunately, The Flood is an ongoing project, and readers are invited to contact Superbard on Facebook or Twitter to suggest storylines or characters. With any luck, you might even be made a character in the stories, with your choices determining Superbard’s handling of your character, turning The Flood into a form of collaborative storytelling. (The credits for the current three stories connect the various characters to their real-world inspirations.) On the whole, this is a project that makes for great reading-cum-listening, and my only regret is that I cannot be in the UK to catch Superbard performing one of these stories live. 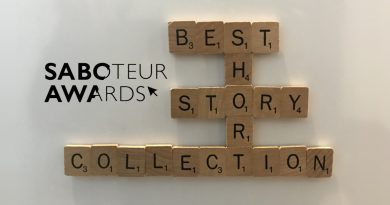 4 thoughts on “‘The Flood’ by Superbard (George Lewkowicz)”