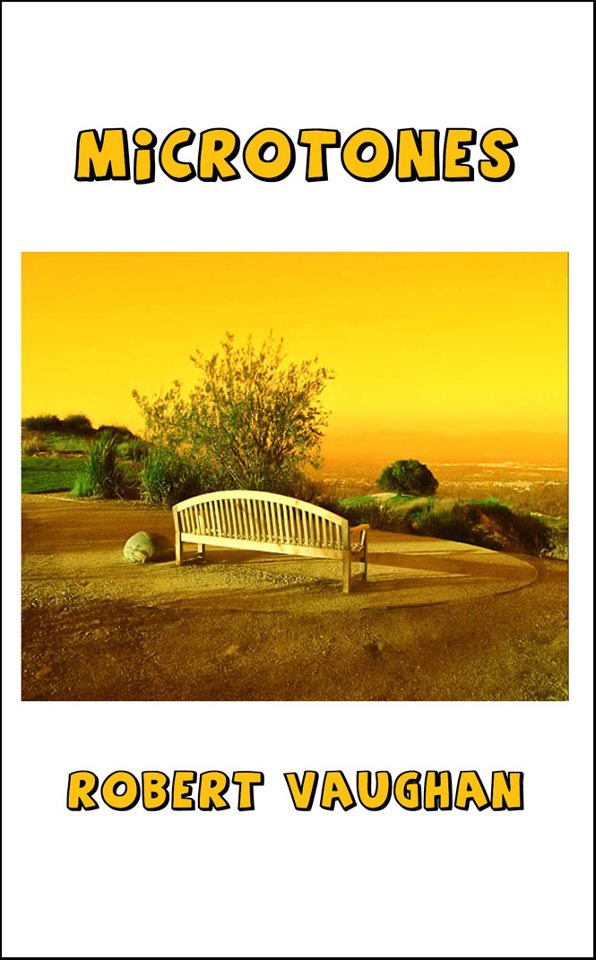 In music, microtones represent intervals that are smaller than the traditional semitones of Western music. In that sense, they mark that which falls outside our conventional categorisations. In a similar vein, Microtones, Robert Vaughan’s début chapbook from Červená Barva Press, focuses on the interstitial, whether this involves capturing emotions that cannot be boiled down to one-word descriptions, or blurring the lines between poetry and prose. Or as the Harry Partch epigraph to Microtones puts it, ‘This is my trinity: sound-magic, visual beauty, experience-ritual.’ Gathering together a number of works that have already seen publication in literary journals alongside new pieces, it makes for a handy introduction for newcomers to Vaughan’s work.

The chapbook opens with ‘Outlaw’, a piece that compellingly demonstrates how Vaughan’s language is able to grasp and convey our inner psychological complexity:

‘I slice my pinkie while he watches me chop carrots in his kitchen.
He’s told me endless reasons why moving in would benefit Starr and me.
He’s a good man. Wouldn’t hurt us. I know this, I believe him. But my scars run deep.’

That opening image of injury carries over into ‘my scars run deep’, which already sets up a tension between giving emotional commitment just one more try and thinking that it cannot be worth the risk. The shortest line of the piece, ‘This curmudgeon’ acquires a level of ambiguity because of this. Is it a term of endearment, the sort of half-joking insult that is born from familiarity? Or does it bear genuine criticism, even a degree of self-loathing that ‘this outlaw’ is the person ‘who makes you laugh’ most? By the end, it seems that resignation has set in too: ‘I watch my future run down the drain.’ So there is a lot of emotion packed into this piece of writing that totals less than 100 words.

Elsewhere in Microtones, Vaughan also displays his humorous side. In ‘Part of Life: Two Ways’, the reader is treated to two perspectives of a single event, with the humour arising from the resultant discrepancy. Consider the difference between ‘The teacher released the deformed creature’ and ‘The teacher let the deformed creature go’. While both might seem equally neutral, the latter becomes inflected with regret when the final lines of its section read, ‘The creature didn’t stir, not a peep. I started to salivate. Would it taste better with cumin or cardamom?’ In ‘Bed’, Vaughan derives a sort of bathetic humour from lines like ‘I have a bachelor of arts in folding laundry. I’m certifiable in the tai chi of scrubbing china’, while mixing in some double entendres for good measure: ‘Escort Sammy the sword swallower to church each Sunday’, ‘Each prick a museum piece’.

Whether he is writing about a man who cannot feel anything in his left leg and ‘nearly passes out, not from the pain, but from the lack of pain’ (‘Sometimes He Feels Like It’s Numb’), or two ex-military women pregnant by the same now-deceased man, one telling the other not to smoke (‘Buried’), or a man mourning his father, who ‘just this time, […] won’t barrel down a back road at one hundred miles an hour, straight into the side of a quarrelsome train’ (‘Wrestling with Genetics’), Vaughan’s particular gift is for clarifying the pathos in extraordinary things happening to ordinary people. That he succeeds in doing this by balancing brevity and levity demonstrates a mastery of short-form poetry and flash fiction that shows how length is by no means a prerequisite for achieving depth in one’s writing.

2 thoughts on “‘Microtones’ by Robert Vaughan”