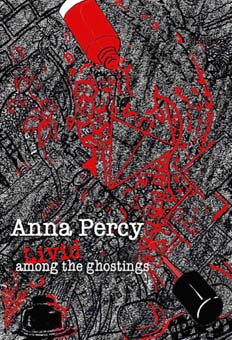 Livid Among the Ghostings, Anna Percy’s first substantial pamphlet (published by Flapjack Press) has the best title of anything I’ve read in recent years. It contains thirteen prints by the illustrator Sarah Peploe, each of which complements the poetry and contributes towards creating something as beautiful on the eye as it is on the ear. Percy, who co-runs with Rebecca Audra Smith Manchester’s Stirred Poetry Collective, an inclusive feminist performance and workshopping space, has one of the most distinctive delivery styles I’ve heard, with an incredibly nuanced use of lilt and varied cadence to carry us across the surface of her work. It’s a subtle, skilful, and highly effective technique. I can’t read Percy’s poetry without hearing her deliver it which is my only qualm about a truly marvellous book. It’s difficult to imagine what it would be like for someone who has never heard her to find themselves with a copy of Livid Among the Ghostings in their hands. But I’ll try – though I would recommend readers to search her out on YouTube before reading.

I haven’t spoken to Percy about the title. I wanted to come at the book without preconceptions, so maybe I am thoroughly misguided, but the image it, and the poetry, conveys is that of layer on layer of the history of brilliant women, greyed by a history that speaks for them, each clamouring to be heard and given glorious voice at the moments of intersection with the most deeply confessional revelation of the poet. There is a rhythm to the flow of poems inspired by women from history and intimate, personal pieces. But rather than dancing around each other without connecting, each brushes against the other, and we feel Percy’s breath give life to the dead and the dead provide the context for Percy’s life. Nowhere is this very clever structure clearer than in ‘Painting Her Cast’, dedicated to Frida Kahlo, and the next, deeply personal, poem ‘There Are Always Desiccated Flowers at the Bottom of My Handbag’. I’m wary to use words like fetish or totem, with their Freudian overtones, but these poems are both about the way we make ourselves manifest in our treatment of external objects. Frida, trapped and institutionalised for so long by her body, nonetheless creates

“verdant flowers and birdsong in a hospital room”

by painting her casts, whilst the narrator of the subsequent poem

There is a sense of the poet measuring herself against Frida, and yet it is not as simple as the one bringing life through nature to a place of death and the other bringing death to nature. It is the beauty of Anna Percy’s words through which Frida lives, and the careful structure shows us the poet’s pain in the context of Frida’s own pain, yet it does so without self-pity. These tendrils of connection are part of a very old and complicated history, and Percy never oversteps, or understeps, the mark in assigning her place within it.

It is not just the skilfully overarching construction that marks this book out. Anna Percy has an uncanny knack for creating perfect phrases such as “she walked disguised /pinballing street corners” and “you had to steal those narcissi poking / through fence posts so teasingly / and Morissey it down the street.”

But for me the strongest poems are those that play lyrically on a low melancholy refrain such as “Matisse”, an ekphrastic meditation on the artist’s painting of blue women. The word blue is endlessly riffed and toyed with, the subtly shifting meanings held in balance and anchored by the sound of the word until the beautiful last couplet – “Blue women are too sharp: / walking blades they cut swathes unnoticed.” But the finest example is the closing poem, ‘For Ruth Betty Blue and All the Fucked Up Women I Ever Knew’, the best slam poem I have ever seen performed. This begins with a Ginsbergian structure of achingly drawn snapshots of the women patriarchy has silenced, each anchored by an opening “who” but it opens out into something far more expansive, which takes the heartbreaking particularity of what has gone before – in the poem and the whole book – and turns it into a universal lament and call to action. Gone is the long, low “who”, replaced by an string of ululating “bones” that reminded me of the pages-long dirge at the end of Dubravka Ugresic’s Ministry of Pain. The last lines, “bones riddled with sickness eating them from the inside out / they have been down to the bare bones of their person / bones hang round their neck of dead mothers / brothers, friends, strangers, lovers” turns the poem brilliantly – those who have been oppressed through history have survived history itself – and provides an apt image to take us back into the world.

‘Dark Corners of the Land’ by Adelle Stripe