Everything I’ve heard about the Holocaust leads me think that Auschwitz was the worst – or at least the deadliest – of the Nazi extermination camps. So when I realised that Izolda, the central, Jewish, character of Hanna Krall’s Chasing the King of Hearts, was on her way to Auschwitz, I feared the worst. As she tells the Viennese Jews in the train with her, everyone knows that no one comes back from Auschwitz. 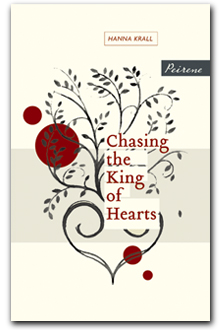 Originally written in Polish, Chasing the King of Hearts is the story of a Jewish Pole who spends the war trying to get her husband (her King of Hearts) released from a succession of Nazi camps. Like the best historical fiction, it makes the history personal, focusing on feelings and the impact of events on individual, private lives.

While luck clearly plays a part in her continued physical survival – a fact Izolda frequently recognises, reminding herself of the series of coincidences and events that have kept her alive – there’s something rather more worrying contributing to her spiritual or mental survival. Like many Jews and Poles (to say nothing of the other victims of Nazi persecution, who aren’t mentioned by Krall) in occupied Europe, she sees her parents, her parents-in-law, siblings and friends either killed or disappear into a prison or onto a train. Krall captures with remarkable simplicity the feeling of living in a society (the Warsaw ghetto, say) where people can just vanish, while those who remain share the unspoken knowledge that the vanished are taken to be killed. It’s a culture of silence that the American troops who liberate the Mauthasen camp can’t get their heads around: ‘It would be unthinkable in the States. No one would ever go along with it. […] With the trains, with the transports…no Jewish community in the States would ever go along with it’.

Krall’s prose style, translated into English by Philip Boehm, in Chasing the King of Hearts can be dry and matter-of-fact, but it lends itself well to the stoicism displayed by Izolda. Every death – and there are plenty, so many in fact that it’s easy for the reader to become desensitised to them – seems to leave her too a little more dead inside. But that helps make her emotionally resilient, and her frequent assertions of ‘she’s gone, he’s gone, but we’re still here’ may sound cold, but they are the mental/emotional defence of someone who knows they’re surrounded by death and mustn’t be dragged down by it. She needs to keep strong in order to stop her husband becoming a statistic of Auschwitz.

What the American troops don’t understand is that ‘going along with it’ has kept Izolda alive – whether it’s allowing occupying soldiers a quick grope and a fumble, or keeping quiet when a neighbour or friend disappears, Izolda and those who survive have in some outward way allowed the Nazis their will.

Inwardly, though, there’s a fire of resistance that they keep hidden. For many, it manifests itself in smuggling relatives out of or black market goods into the ghetto. They have different reasons for defying the regime, personal gain being a common one, but others have more to do with the common thread of humanity binding together the inhabitants of the ghetto (and of the wider world, though it seems not to be felt by the Nazi characters). Izolda’s cause is her husband, Shayek, first in Auschwitz and then in Mauthausen. Crucially – even though she is once arrested as a member of the Polish underground – she has no interest in nationalism nor in fighting for Poland against the occupier; hers is a personal cause, in amongst all the national/racial politics, and her love for her husband drives a story unconcerned with dry details like the dates of battles and who was in charge when. The war and the Holocaust are background detail, an obstacle to Izolda and Shayek being together, but not the story itself: this is a love story in extreme adversity, not a history book.

Krall could have just left it there, with Chasing the King of Hearts being a love story in the Holocaust, a tale of human survival and love against the odds. But she takes it further, and her story of survival at any cost comes back to question the cost and the impact of the Holocaust on the survivors. The Holocaust, the Nazi persecution of the Jews, wasn’t an isolated historical event; it didn’t get cut off by the end of World War Two. The actions of the Nazis reach down through the decades that followed, and the survivors of those few years of extermination carry those years as a burden. As well as the physical symptoms of their suffering and torture, some (to specify anyone in this case would be a spoiler) carry around survivor’s guilt and the mental scarring inevitable in people who go through Hell.

As if to further demonstrate – quietly, subtly, with just a hint left for the reader – that racial/religious discrimination isn’t limited to persecution of the Jews in the 1940s, Krall drops in a few mentions of Israeli checkpoints and Palestinians who ‘assure [the checkpoint guard] he’s going to work, and she has to guess which one will work and which will blow himself up’. In the image of a people locked up in their own areas of town, lying to armed guards so they can earn money to eat, there’s an echo – a faint one – of the Warsaw ghetto. It’s just a hint, but a thought-provoking one.

With Chasing the King of Hearts Peirene Press continue their efforts to bring the best of foreign-language European literature to English-reading audiences, and this time they’ve given us a touching, tense and heart-breaking human story told amid the most important and devastating story to affect Europe in living memory. Krall demonstrates that it’s through our human relationships we can survive terrible adversity, and it is those common threads of humanity we must remember if we are to avoid more genocide.