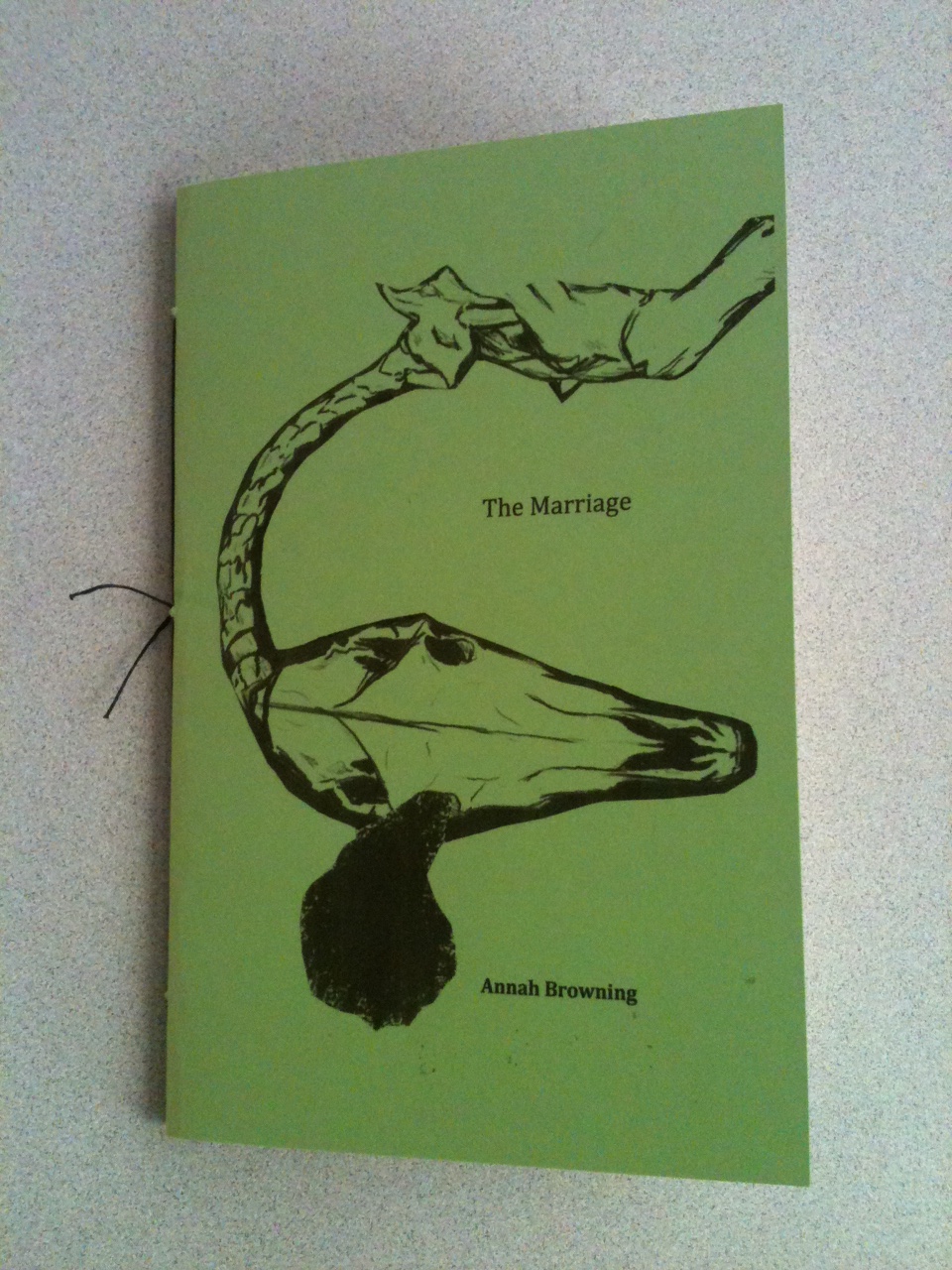 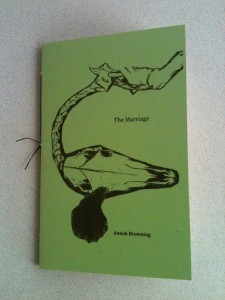 Annah Browning’s The Marriage is a chapbook of twenty poems dealing, as one might expect from the title, with the institution of marriage and its aftermath. Many of these poems are filled with foreboding. The opening poem, ‘Dear One afternoon in January’ ends with the lines

– we’ll walk over them,
we’ll talk about naming them.

We’ll let them hurt us.

(‘Dear One afternoon in January’)

The men who appear in these poems are ones you wouldn’t want to have much to do with. They are murderers in ‘Flat Hills’ or an arsonist in ‘House-Sitting’. The closest you get to acceptable is the character who appears as ‘The Pet’, one of the few poems in which the narrator has a semblance of control.

Let me clean your glasses

for you, evil pet of mine. I’ll
take you tweedly, into

my lap. Wrapped up in your own sleeves

How could I leave you frozen
when there are so few

others? How could I turn
the whistle away, when the wind

opened up my door?

Nevertheless the trajectory of the book is towards hope, as the narrator begins to find herself and to escape.

I have to make
a slow majesty

out of refrain, the same
water slapping the same

I cross my arms above
my chest. I will not

be blessed, I will not have bread.
I go into the corridor

The animals that appear in the poems like the fish in ‘Lake’, a horse and a sled in ‘The Winter’, the cicadas in ‘House-Sitting’ bring messages and hope. It is the starlings in the final poem ‘Home’ who provide a resolution

Starlings recreate the city.
It travels. It changes.

These poems come across as ones which were set down with speed. You can feel how much Annah Browning loves words and letting them all flow out. However as a reader I was sometimes left feeling as though I hadn’t been given the key to what these poems were about. I found myself wishing that they all had the clarity of ‘Anniversary’:

Sometimes, you fall in love
with the man who killed

and fondle his ears.

rather than ‘Thursday’s Child’.  In  ‘Thursday’s Child’ there are things which you can see clearly ‘a man who left / his overcoat on the stairs’ and ‘the polished knob of a bed’ but then veers off a  lines like ‘The talent of larkspurs / is that they are not larks’.

It is fine to write poems as a discharge of energy (as Browning comments in an interview online) but you should go back later to consider what this might mean to the reader.

Annah Browning favours two line stanzas, usually with the second line indented. I did find myself wondering whether she’d considered experimenting with longer stanzas. If I was in a workshop considering a few of these poems rather than reviewing all of them I might take the opening of a poem like ‘House-sitting’.

There is a man inside
the house, teaching

the living room how to burn.
He has already

and suggest removing the stanza break so that the man teaching the living room to burn is all in the same stanza. But perhaps Browning is deliberately using stanza breaks in this way to show the fractured relationships in the poems? A chapbook is sufficiently succinct for her to pull it off without it seeming too much of a habit.

The poem which I kept going back to and which became my favourite of the poems in the book is ‘Lake’.  This is half way through the chapbook and represents a turning point. It also encapsulates what the book is about, discovering your own way through life even when it threatens to imprison you.

I keep walking into myself
Stillwater. This is not a lake

for knowing. This is not a lake
for known. I rub out

my face on the water, it comes
right back. One of the fish,

he asks me Do you go to sleep
every day?