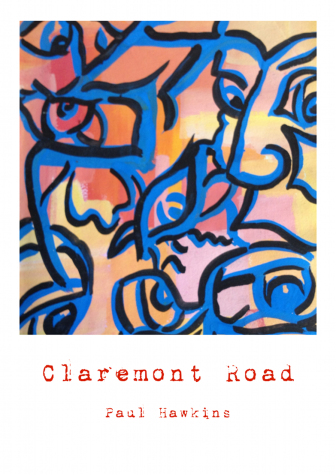 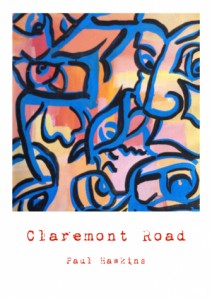 In the early 1990s, Claremont Road in Leytonstone was the locus of one of the most prolonged political protests of the Thatcher era when a coalition of local residents and longhaired squatters united to resist the demolition of the area and building of a link road through it. Their tactics included, amongst other things, the creation of micronations in unoccupied houses in the road and many of the poems in this sequence have house numbers in their titles. Although ultimately unsuccessful, the protests delayed the building of the road by so long and added so much to the cost that the government was forced to reconsider other similar schemes across Britain.

This pamphlet by Paul Hawkins is a kind of poetic documentary on the Claremont Road resistance, although the focus is as much on the personal as the political and the stories told are primarily about the people involved rather than the ideologies. This is not to imply that the politics of the protests and of their time are not important in the poems, but they are a background against which we see people living their extraordinarily ordinary lives.

Hawkins uses a range of techniques to create a sense of distance and disrupt the reader’s expectations: cutup, parallel columns of text, mathematical process and prose poems amongst others. On one level, this experimentalism reflects the counter-cultural aspirations of the protesters, but it also serves to bring the undercurrents of that culture into focus.  The poems are saturated with images of drug abuse and violence in passages like this:

Dear Louise
eight days and nights of the painbirds –
flapping and feeding and shitting voices into me.

In slow-mo Shuttup picks up a bottle,
arcs it into Old Mick’s mouth:
a slice’n’smash glass explosion

The poems evoke a counter-culture that reflects the excesses and irresponsibility of the City mainstream culture it stands against. With the exception of a core of dedicated political activists on both sides, the low-level indulgence and irresponsibility of those involved in the protest mirrors, in a minor key, the grand-scale madness of an establishment in the grip of political and economic decadence. The key exception is Dolly Watson, life-long resident of No. 32 and matriarch of the protest whose “they’re not dirty hippy squatters, they’re the grandchildren I never had”, quoted in the Wikipedia article on the protests, serves as an epigram to the sequence. Interestingly, the poem that consists of a cut-up collage of her letters to the poet is one of the most directly political and least confessional in the book.

Hawkins has an acute ear for the spoken English of his community and its possibilities as verbal music, as can be seen in lines like

Squeeze box tunes roll around
the shattered gutter of the street strummer,
summoning a survival jive.

I started out by describing Claremont Road as a kind of poetic documentary, I would like to stress that it is more poetry than document, and fine, unflinching poetry at that. Tellingly the inevitable unhappy ending does not coincide with the ultimate failure of the attempt to stop the road. In fact it is set in the ‘now’ of the work’s composition. Cameron is in Downing Street, UKIP are on the rise, nothing has really changed, apart from those things that have grown worse. The final poem in the sequence is a vision of Brighton, where

The payphone is broken, its guts spilling
onto the West Pier’s weathered boards.

All is not quite lost, however. The poet/narrator has survived to write the poems. What’s more, he has a ticket in his pocket for the bus out of town. Where next, this reader wonders. On this showing, the dispatches will be worth waiting for.