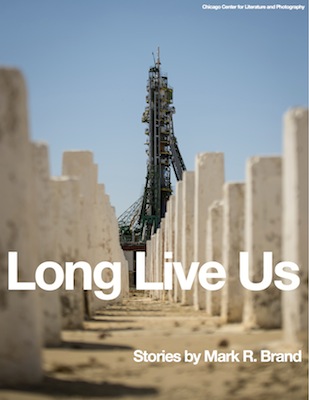 Alright. Pour yourself a mug of coffee and cut yourself a slice of mom’s apple pie: it’s time we talk about Mark R. Brand’s Long Live Us, a collection of Chicagoan short stories with a sci-fi flavour.

I’m going to start this review by being a bit British at you. I didn’t get some of the subtler nuances of this collection, because their roots are buried so deep in American culture as to leave outsiders a little stumped. A couple are strongly grounded in those appallingly vast housing estates they call “suburbs”; another harks to the pre-remix-culture myth-and-match attitude of the Great Depression tall tale. All feel very American, and don’t stop to explain themselves to outsiders. Long live us, indeed: the working Midwesterner. 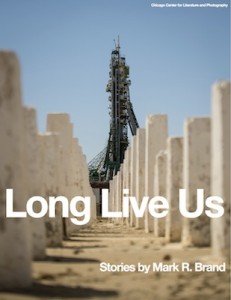 For Old-World types like myself, I think the effort required to overcome these cultural presumptions is a hurdle (not that it’s an objective problem, of course; for the intended audience, they presumably pack a laser-guided punch). The good news is that for most of them, it’s the only really significant issue at all. The bad news… I’ll come back to. Once you’ve got your head in the right place, though, Long Live Us is a masterful collection, showcasing Brand’s talent for taking on different voices and letting them loose across a variety of genres.

The easy schoolroom drama ‘Red Rocket’ lets the reader into the collection gently. Brand’s characters act with a simple, very real humanity, and his storytelling is precise and well-observed. The childishly overstretched metaphors, the laugh-out-loud frankness and the sense of frustrating separation from the adult world constitute the most believable child protagonist I’ve read in years, and I’m on a Diana Wynne Jones binge. If you sense looming disaster at the end, remember that feeling: you’ll come back to it.

I had some difficulty with ‘Potluck’, with its (hopefully) absurd conceit that one day children’s weights would be strictly monitored, with a high BMI preventing University admission or even obtaining medical insurance. ‘Potluck’s characters are naughty teenagers using illicit food as currency, making this a strangely innocent suburban episode of The Wire with mashed potatoes in place of drugs. There’s a lot more to talk about here – ‘Potluck’s crammed with details worth discussing – but go read it first!

‘Nose Goblins’ plays with your expectations by opening with a man in a space-suit on the protagonist’s doorstep, but he’s just there to deliver groceries to a family in protective exile from a deadly strain of meningitis. For all their sensible caution, living indoors for weeks has turned the couple into a pair of badgers in a small box, sorely lacking in blitz spirit. Outside, others, with the public self-righteousness of religious-right homeschoolers, have declared that all is well, in spite of all the evidence. I’d call it sad, but it’s just human, and like everything else here, utterly believable.

Almost everything. ‘Garret’s Hole’ is wonderfully unbelievable, a tall tale in the Great Depression tradition, told by an unreliable narrator who bickers with his companions like the finest of comic gravediggers. Again, Brand inhabits the characters perfectly – although given the style of the piece, he could hardly have exaggerated them!

‘The Insurgents’ is a masterpiece of descriptive prose. And that’s all I’ve got to say about it; it’s a vignette, short on events and long on scene, and it’s gorgeous.

But remember that bad news I mentioned earlier? It was re-reading ‘The Insurgents’ that I noticed: most of the time I love Brand’s paucity of description, but in places, it left me disconnected. ‘She Was Never Free to Begin With’, which describes civil disorder like year-round Rodney King riots, just left me beached. I’ve lived with that kind of unrest literally at the end of my road, and I understood the emotions involved, but I simply found that Brand’s tight, anachronic style left too much out for me. A pupil bayonets his teacher, a woman murders her husband, children are evacuated from a police-state Chicago; there’s a story here about sub/urban isolation, and it’s a valid style for the reader with the right shared references to flesh out the skeleton, but I ended up reading the whole purpose of the piece from its last paragraph.

‘Habitat for Humanity’ is back with the (relatively) minimalist specific of ‘Nose Goblins’, toying with a few ideas as old as relativity, but it’s little more than brain candy about a girl left behind by the man who got her pregnant. Enjoy it for what it is, though, especially after the empty hopelessness of ‘…Never Free’.

‘The Woman in the Pit’ ends the collection on a High Sci-Fi note worthy of the Big Three. Three judges must decide the fate of a woman appealing her death sentence from her harsh concrete pit. Brand never allows her to speak, which I liked, and high ideals are batted around her while she mutely shivers down below. Having committed an act of animal wickedness, she is exiled from the community of humankind; nevertheless, one of the characters, channelling Bernard Marx, decides he’d rather be a merciful animal than a rational demigod. The emotion soared as he broke his society’s most inviolable tenets in the pursuit of human sentiment – but like the unreal joy that accompanies all great victories, you know it can’t last.

Life goes on. That theme connects the last story with the first, and in both cases, it’s likely about to go downhill fast. It’s present throughout: ‘Potluck’ and ‘Habitat’ are about people muddling on through; ‘Nose Goblins’, ‘Red Rocket’ and ‘The Woman in the Pit’ all climax at moments of unsustainable emotion. Brand’s framing, the moments he chooses to leave and move on, seem tailored to leave the reader wondering what’s to come. Life goes on, always.

I’ve noted a few problems with a few of these stories, and except for ‘…Never Free’, these didn’t really bother me that much. Bear these themes in mind, but don’t forget to enjoy Brand’s silken prose and pinpoint characterisation. The author’s skill demands respect (comparisons to Dahl are not unwarranted), and even the greats miss the mark every so often. 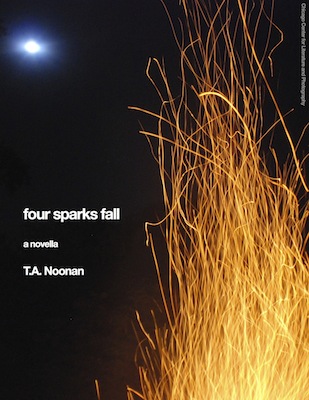