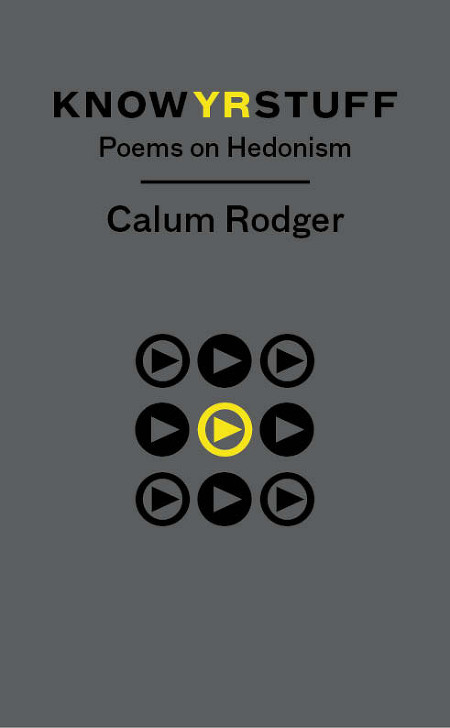 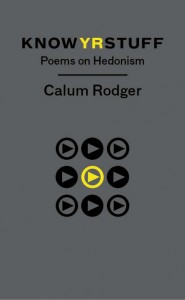 KNOW YR STUFF is a pamphlet containing eight poems written on the theme of hedonism – the belief that pleasure is the only intrinsic good. The result is an experimental and high-energy collection that combines existentialism, frustration, drunken misadventures and ‘imaginary girlfriends’.

Rodger’s investigation into the hedonistic psyche is powerfully desperate and ironic. On my first reading it made me want to join in, get drunk and simply screw it all into oblivion! It is easy at surface level to relate to the frustration and humorous subjects within but on a second or third reading you are able to ponder the textual depths of the existential void portrayed.

For example, there are many clichés broken. In the first poem, ‘know yr stuff’, a teenage narrator finds a love for drugs when it is in fact a love for a book (about drugs). Even the forced rhyming in this poem twists your pre-conception because it is very tongue in cheek:

There are also intriguing nuances created that make you stop and work on the meaning. One such phrase for me was ‘emphatically phatic’ within the poem ‘poem’. He states that the reason he writes poetry is for a:

desire to be desperately loved
how emphatically phatic!

If you look up the definition of a hedonist you are told ‘A hedonist strives to maximise net pleasure’. This idea forms my favourite part of the collection for it is full of constraint and futility. This ‘continual strive’ becomes relentless and ends with Rodger questioning pleasure within his work – questioning the determined persistence that tends to end up as the complete opposite of maximum pleasure, due to over-thinking, over-analysing or a physical or emotional reason. As a reader, you soon become stuck in a Sisyphean loop. This is evident within the poem ‘damn that pesky existential void’. It starts with:

In fact, I would go as far to say that Rodger successfully holds these poems together through a complete unravelling of the self.  For example, the remainder of the poem, ‘damn that pesky existential void’, tries to analyse being ‘well adjusted’ but comments:

Were I otherwise adjusted could I trust adjustment’s
judgement on the subject just-adjusted from the first?

Rodger continues to adjust his adjusting thoughts on adjusting until the final lines:

do NOT adjust your set. Ha-ha-ha. I just did. I juiced it.
cue-routine-reward
damn that pesky existential void!

By repeating the mantra in italics, he has managed to bind together the prose in an intricate and repetitive way and at the same time allowing the fragmentation of his mind to be halted. The informal language used is a technique he uses often and it works to alleviate the intensity created, both intensity of subject and textual style.

Stylistically, there is often a lack of punctuation throughout and capital letters within titles. There are quirks like ‘your’ spelt ‘yr’ all the way through. Sometimes he uses shortened words to add to the pace, like ‘re’ in the example below from ‘sexual positions with imaginary girlfriends’:

I love
you you’-
re all
roses’
thorns

He also uses the space of the page well. Within the poem ‘pleasure’, Rodger uses six pages to express what maximum pleasure is through short definitions, long prose sections, and several methods of repetition, including typing out the word pleasure 71 times to indicate each time Shakespeare used the word pleasure in his comedies. Then the poem ends with ‘well I think that’s enough pleasure for one evening’ but you turn the page to find:

no, I want to go again

fuck it let’s go to sleep

Only by typing out that section have I realised the gradual declining ‘plea’… The ‘fuck it let’s go to sleep’ is a comment on a line previously within the poem entitled, ‘falling asleep remains the epitome of pleasure’ which is brilliantly nihilistic, futile and ironic. What is the point of striving to achieve maximum pleasure through consciousness when the ultimate is actually gained without consciousness? Again, it is a notion of a completely dissolved self that frames the structure of the poem.

To conclude this Sisyphean collection, I want to highlight a line within the poem ‘pleasure’. After the aforementioned 71 Shakespearean ‘pleasure’s, Rodger enters a stream of consciousness and describes the terror of an unrolled spliff balancing precariously on a flimsy book cover:

often, the cover curls back on itself which is really no good, it leaves your spliff always threatening a lurch into the void which is absolutely terrifying

I would say that the line ‘threatening a lurch into the void’ describes this collection completely. It’s not only very humorous but it teeters on the edge, threatening to lurch you into that existential void by knotting you together with repetitive prose, making you count how many times he really has typed the word ‘pleasure’, or just simply by making apparent that there is no escape. 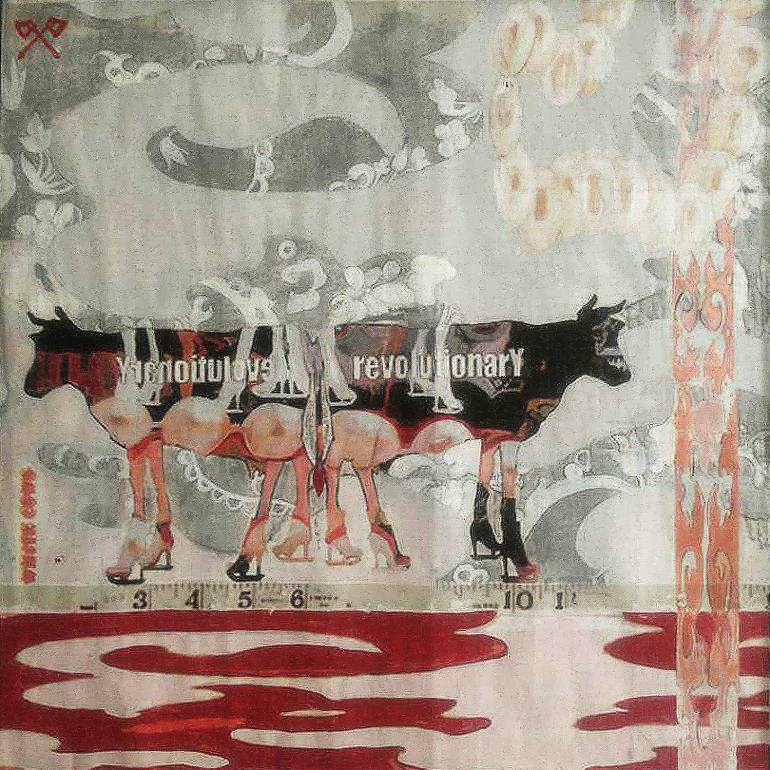