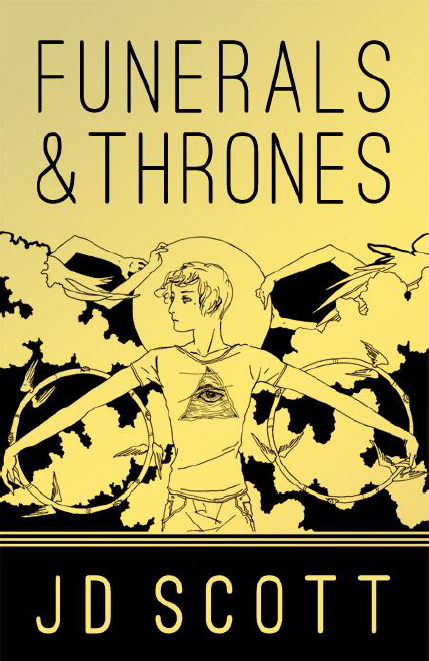 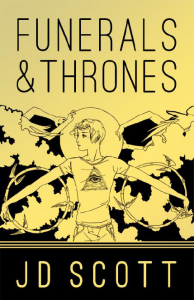 For the poet of faith, the bedroom is a chapel, a hermit’s cave, a sanctuary; for the poet of desire, it is a bower of bliss, a cultic centre of fancy and aphrodisia, an eroto-grotto. For JD Scott, in the thirty poems of his second chapbook, Funerals & Thrones (Birds of Lace, 2013), it is both. From the beginning to the end it is also the ring in which the fate of his poetry is to be fought for. He is nearly overwhelmed by his single focus, as the sufferer of a monomania often is. He cries out in a late poem:

I’m collapsing beneath myth and metaphor,
references to my bed, its filthy sheets,
a boy who believes in the classification
of all things and keeps the inverted
card of Judgment on his nightstand.

Like a tarot-reading Oblomov wallowing in his bed for forty pages, and not even doing most of the fun things that can be done in a bed, Scott knows that he ought to pull himself together—he can see the reasons for it—but he is in love with inertia. Inspiration leads to depletion. This is his curse and his cross to bear. ‘An unmade bed is an unaccounted sin,’ as he says in the opening poem, ‘Moirai Effect.’ It should be clear that this is very far from other bedroom poetries of the past, from the fuck-the-world-away boudoir lyrics of the English tradition to the grimly exhibitionistic verse of the second half of the twentieth century. As the chapbook’s title, Funerals & Thrones, suggests, Scott’s poems owe much more to the world of fantasy and theology (Thrones are a class of powerful angels), and to Scott’s own ideas around rituals of power.

To be fair to Scott, I don’t believe that he is truly a poet of faith. I think that he would love to be called a stylite, but only if that word referred to a style icon. But he is drawn to the metaphors of faith to speak of the extremities of yearning. In post-religious 2014, most poetical writing about faith is of this variety, and Scott is ploughing a familiar furrow. He is, though, and to his credit, ploughing it hard. These lines from ‘The Chariot (VII)’ are typical:

I fall asleep on timber,
dreaming of funerals and Thrones, great wheels
plastered in evil eyes, watching me walk
down dollhouse stairs. Something rosy.
My fingers are jointless and everything
smells of sulphur. Ophanim boys, I give
myself up if I think them cherubs.
A hot thing spinning. Someone named Ezekiel.
Naked Ezekiel smacking his crotch
and pointing to emissaries of the air.

This is the chariot of Ezekiel’s first vision reimagined as a raucous gay cruise ship, with all hands on deck and every ass up in the air. ‘Matron Saints’ recounts a childhood sleepover with a friend whose well-meaning but nervous mother ‘made / sure we slept with two pillows / between us.’ At times, Scott denies the possibilities of faith, as in ‘The World (XXI),’ where he boasts, ‘I am a marvel, / not Ezekiel, not throne of dog, / nor revelational book,’ but the denial draws attention to the thing denied. Where faith falls short, mysticism meets his needs. I have already mentioned the tarot, and no fewer than eleven of Scott’s poems allude to it in their titles. (The numbered, parenthetical titles—‘The Lovers [VI],’ ‘Death [XIII],’ ‘Temperance [XIV],’ etc.—which are cards from the Major Arcana, also remind one of George Herbert, in, say, ‘Affliction [I]’ to ‘Affliction [IV],’ or the three poems called ‘Praise,’ exhausting the lines of metaphysical inquiry on subject after subject.) He speaks of visiting ‘a psychic / in Boerum Hill,’ who promises, among other things, that the poet ‘will give birth to wolves’ (‘You’). (Which is precisely what poets like to imagine the writing process is: wolf-birth.) The very roomscape is pregnant with secrets in a JD Scott poem:

The bed occult as altar, permeating motes
of dust, brandished doors opening and closing.
The objects taking on voices, narrating as such.

Leaving aside the question of whether doors can be brandished (answer: erm . . .), making the bric-a-brac of a room (sample items: ‘bookquake,’ ‘advent vitamins,’ ‘cumshirt soldier’) agents of an immanent divinity is ambitious. And there is great ambition here. If Scott sometimes fails, it is because he relates events that feel significant and sound significant, but are told in a way that is so confidential and coy that we wonder if we’re actually the best readers for them. In a full-length collection, with higher stakes, I believe that he will speak up so that the back of the room can hear him, too.

A particular achievement of Scott’s that I’d like to draw attention to is his depiction of New York rooms. The Brooklyn poet sees their tininess and shabbiness (‘It’s February and the street salt warps the floorboards’ [‘Red’]) as clearly as anyone has, and he recognises their ludicrous, out-of-proportion value in a system where the common apartment-dweller is powerless (‘The wizard carves a sigil in the floor, | forfeiting his deposit’ [‘Hedge Fund Wizard Moves’]). It is important to realise that the crowded city and crowded rooms are reflected in these crowded poems, each stanza ‘a room / with all the clothes moating /

the perimeter of the bed’ (‘All the Things . . .’). There is an uncomfortable density in the air. Scott uses a rich and curiously varied lexicon. In one poem, ‘Cannibals in Love,’ you will find the words ‘thurifers’ and ‘ophidious’—both guaranteed looker-uppers—which is like finding fenugreek and peppermint essence in one dish. In the same poem he attempts a consciously excruciating jokette: ‘Shhhh, we are as church as quiet mice.’ Oof. The poems are littered with incredibly unfashionable references (think Bacchus, Babylon, and fishwives) as the seabed is littered with amphorae, but Scott is probably right to see the beauty in these forgotten, encrusted tropes.

Even Scott’s most liberated poems—short, direct verses that are neither quite epigrams nor koans—are caught in the tar-pit of his apartment. Here is ‘The Body’s Work Is Never Over’ in full:

On my windowsill, a spider dies
upside down, an unopened orchid.

And ‘Somnambulate,’ also in full:

Necessities
grown difficult or separate.
Tonight I will untangle the sheets,
make a bed I will not sleep in.

The more you read Scott, the easier it is to see the doubt under the faith, the revulsion inside the desire. As if to acknowledge this tension, and to explain it, he has written one of the most convincing recent poetical apologias. It is unsurpassable in its #sorrynotsorry earnestness:

Excuse me for crafting these parables,
other words do not emerge so easily.