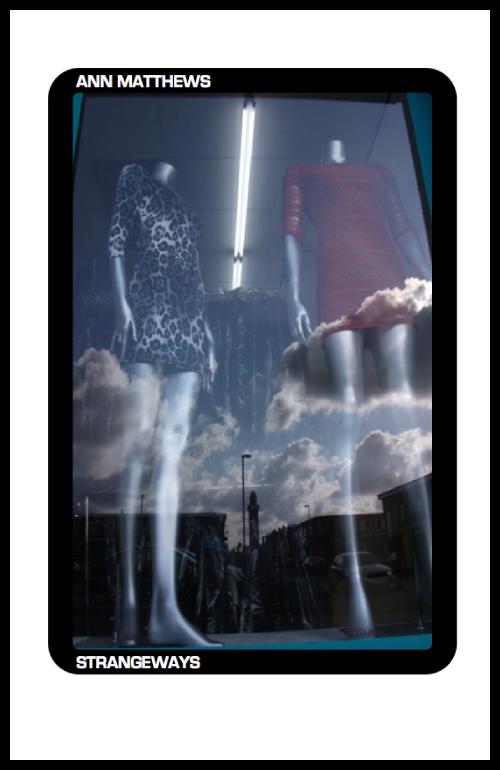 This is a book of verbal collages.  The poems trace a North Manchester city-scape of decline and desolation.  Description of moments and places is mingled with scrambled song lyrics by local bands and occasional scraps of street speech, shop notices, or fragments of officialese.  Here is the whole of ‘Industrial Estate’:

A new vision, a flat-pack
philosophy, started here to
earn some pay. Clean neck and
ears, heart and lungs – work, work
for all my desires there’s
assembly required.

The scene is set with an observation.  The lines in italics are a collage of lyrics from The Fall’s song for which the poem is named and ‘Flat-pack philosophy’ by the Buzzcocks, and probably something else.  This pattern of scene and verbal soundtrack is repeated, with variations, throughout the pamphlet.  Often, as here, it feels as though the poet is standing back, being reticent, letting colour and feeling come out in the collages.

The landscape we are shown is desolate and deprived.  Sometimes the collages seem to burst out of this, as in the poem above, and produce beauty from it; elsewhere they echo it, as in ‘Derby Street East’ which starts:

Ann Matthews says in a note that the songs “came to mind and kept [her] company” during repeated walks around Strangeways.  Each poem is named geographically, after a street, area or direction of walking.  On first reading, I felt lost without the tunes in my head.  On re-reading, the juxtapositions of collage and plain description started to make their own music.  The effect of the poems is cumulative – Strangeways isn’t a book to pick up and read one or two.

The descriptive passages are close to prose, cut into very short lines, heavily enjambed.  This gives a flattened effect, adding to the contrast with the collages which show their own more lyrical origins.  It also conveys the fragmentary effect of walking around, noticing some things, not others.  Looking at the pamphlet as a whole, that’s effective.  But it can also be limiting: I found myself wanting longer lines, to give the descriptions greater impetus and tension.  Here is the start of the opening poem, ‘Derby Street’.

A slight gradient.
A grid-work.
Empty squares
where buildings
once stood in
ruined squares
with mounds of
dirty brick
and bric-a-brac.

These lines seem to need a melody to stand them up on their own.  Perhaps that’s the intention, but it’s a brave way to start the pamphlet.  Also, I don’t see / sense that landscape: the descriptions work best when they focus on detail, and in particular where they bring in other elements like street signs, getting bolder with the collage.  I like ‘Derby Street’ best when it moves towards the surreal:

Out of place
within recollection
pink letters on white
laminate ENVY ME
London and Paris.

Strangeways is interesting as an experiment in psychogeography, which I hope Matthews takes further in future writing.  At their best the poems succeed in making happen what’s described in the last two lines of the book, in the poem ‘Here’:

A memory catch
sings in ears.

There are photos to go with Strangeways.

‘THE MOTH IS MOTH THIS MONEY NIGHT MOTH’ by David Berridge

One thought on “Strangeways by Ann Matthews     ”