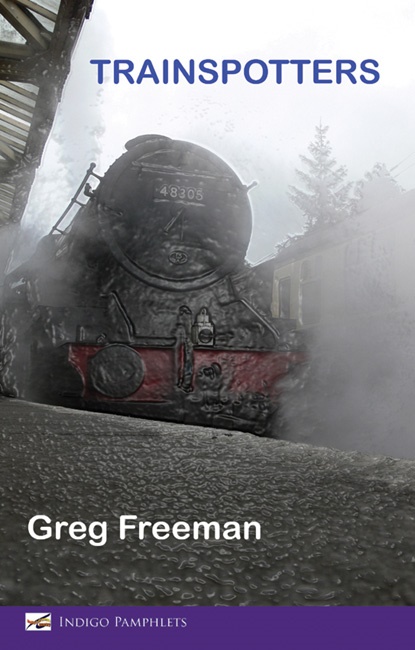 Greg Freeman’s Trainspotters begins with a nostalgic tribute to a brother slightly at odds with his own identity, a fitting first calling in a journey of juxtapositions that continually effuses great warmth for its subjects.  However, scratch through the intricate surface of Freeman’s warm and tranquil speech, and you find a brewing darkness below the veneer of these tightly formed works. ‘Dance On’ moves from the nostalgic to the sinister:

…at dawn, on his bike
he rode to the cutting, and lay on the tracks…

If I gave you the last line, that would be giving too much away: these are definitely Freeman’s tales to tell. Trainspotters is no arbitrary title for a collection which utilises the writer’s clear fascination with locomotives as a backdrop, against which to paint his observations of nature, the human world, and the impact of one on the other. However, those fearing anoraks and spam sandwiches need not be too concerned. There’s plenty of electricity crackling along these iron veins, although, naturally, due respect is given to those signified in the collection’s title:

…clattering
down from Todmorden to Hebden Bridge
takes seven minutes, three tunnels
and one viaduct.  Sandwich-munching,
tea-swilling anoraks; they say
we seek refuge in regulations and timetables,
the permanent way.

Local details will chime with many, especially in Freeman’s more barbed observations, including the “Hockney’s / housed in the magnate’s mill”, but the poet’s wandering eye takes the reader on journeys far beyond the limits of the Calder Valley. Whether the familiar horizons of Yorkshire, or the more glamorous Tuscany and Zimbabwe, each location feels utterly reachable and visible, regardless of distance or oceans in the way.

Sometimes it seems that there is nothing sadder than a train, big iron beasts doomed to continually travel lonely routes within the restrictions of rigid tracks, but the poems find delight in that diligence. Even the mundane uniformity of high street brand names are transformed into, and become a part of, the train’s repetitive, somehow musical, hypnotic rattle and chug: “Accessorize; Costa; Next; Body Shop”.

But, in spite of delight, a sense of dread is never many stops away, and is nowhere more evident than in the chilling ‘A Job on the Railways’:

Hitler bluffed his way into the Rhineland:
Dad was shunted, one stop to another,
caged in ticket offices, free in mind
as Metroland’s spider extended its web.
Japan pounced, moved south from Manchuria.
Dad spotted birds, knew he’d found the right job.

The final line of the following stanza is particularly devastating, and the theme is carried through ‘Train to the Kwae Bridge’, finding great power in the subtlety of description:

The train still runs over rebuilt spans; you take
a picture to show my mum.  I walk across,
along the tracks. David Lean, Alec Guinness…
Hollywood version for a post-war audience.
Wind in the middle.  Try to imagine it,
look down at the water, through the gaps.

But poignancy is found in much subtler subject matter than war.  Even a found poem on butterflies pronounces itself with a thorny tongue, lamenting “The damage to populations / wreaked by faraway eruptions”. Trainspotters is a varied, engaging pamphlet that glimpses extraordinary moments in our shared human history, crossing lines, the mundane and everyday made marvellous by a keen eye for detail and a pitch-perfect ear for the music of language.  It might not make you reach for the flask and spam sandwiches, but may well make you smile the next time your train judders to a halt between stations, gifting you an extra ten minutes to stare out into a borderland you’ve never truly paid attention to before.