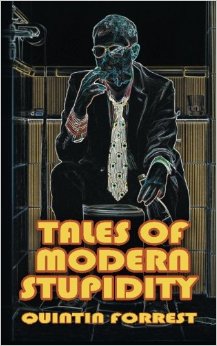 In Quintin Forrest’s Tales of Modern Stupidity you’ll find a brilliant selection of short stories that relate directly to all aspects of modern life, from the Royal Family to reality television. Forrest is a terrific writer with heaps of raw talent. He’s written great stories that are all refreshingly different but with the same subtle undertones. It truly is a fantastic read. 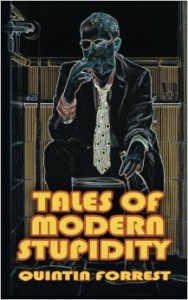 The first story in the collection really does set the tone for what is to follow. It follows an aspiring writer and his toy bunny (who happens to have a wonderfully sassy personality of his own) through the Big Brother House. The story is filled with great dialogue and amusing narration, told from a very strong and distinctive voice. It proves to be a strong opening to a great collection, as through the narrator and his bunny we see the point of view of celebrities who enjoy the fame as well as those who merely use it to reach a goal.

The character of Lavender Bunny is one that appears four times in the collection, and is the only recurring character too. I’m not surprised Forrest has decided to do this though; the stories with him are highly amusing and filled with digs at celebrity culture. I love that he begins and ends the collection with this character, and does it in such a way that we see both the beginning and end of Mike and Lavender Bunny’s career. It’s clever and rounds the book off very well.

These stories seem to exist to highlight the world of celebrities and their fans. Although it proves to be a highly entertaining and light-hearted read, it also brushes lightly against some pretty important topics. To me it came across as these stories of Lavender Bunny touching a little on mental illness. Sure, it was only a little, and it could be easily missed, but nonetheless it was there.

All of the other stories in the collection have new characters with distinctively different voices. Forrest has written them all so differently and so well that it’s almost as if there’s a new writer for each. Although all of the voices have the same slightly despairing tone, they do all stay separate in your mind rather than blurring into one, as is the case in many short story collections.

It’s especially impressive how well he manages to get into specific people’s way of speaking. For example, there’s a story told from the point of view of Prince Harry, and although I’ve never spoken to him myself I imagined him to speak in exactly the way Forrest has written him. A great example is ‘I’ve boffed…most of the fillies in there already’. It’s so funny, and so realistic. I love it. Similarly, he’s got Sarah Palin’s vernacular spot on, and Gordon Ramsey? Amazing.

Despite my initial thoughts on the book based on the title, the narrators are not themselves stupid (or at least not completely stupid). I feel it’s more a book highlighting the stupidity of the rest of the population, which unfortunately includes you and I. But still, it makes some damn good points and seems to capture what I’m thinking pretty well. For example, in ‘The New Doctor’, he expressed my thoughts exactly on Doctor Who.

It’s really hard to pick a favourite story in a collection filled with such talent; in fact, I’ve found it utterly impossible to pick one. I found all of them were equally filled with humour, satire and reality, with fresh new stories and characters in each.

I did, however, come across one story that wouldn’t be missed if it were left out of the collection. I found ‘Larry Trotter and the Staff of Power’ to be very disappointing. This was partially because the title got me thinking it would be a clever, pop culture parody of Harry Potter, but it wasn’t. It was just a weak story about a man called Larry Trotter. I found the story to lack the creative energy that the others in the collection had, which was disappointing but still not enough to lower my opinion of the collection as a whole. Still, if it were in any other collection I’m sure it would be just fine.

I think Tales of Modern Stupidity is possibly the best collection of short stories I have ever read. I love it, and I just know it’s going to be a book I’ll go back to again and again. It’s filled to the brim with very clever humour and writing, and it’s one of those books that you just want to keep reading from page to page until you’re done. It truly is a fantastic collection that I think everyone should read. Seriously. Go read it.

September 11, 2015 dj4twinx Comments Off on Fishermen’s Tales by Peter Kennedy

2 thoughts on “Tales of Modern Stupidity by Quintin Forrest”