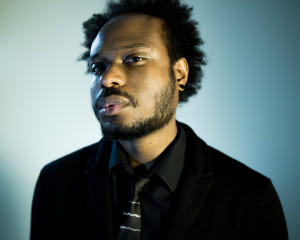 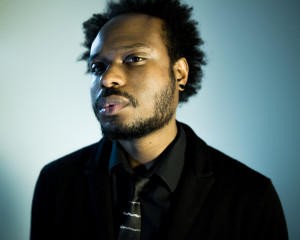 Jamaal May is a Detroit-raised poet who has been described as a ‘rising star’ of American poetry. His debut collection, HUM, has won numerous awards and Jamaal received the Spirit of Detroit Award in 2014. He also co-directs Organic Weapon Arts, a press that publishes a superb range of poetry collections and creates poetry films.

For any UK-based readers looking to get into American poetry (or for any American readers who haven’t heard him yet), May’s work is a real treat.

And, experienced live, more than a little magical…

Jamaal May is pausing between poems. He shrugs, swipes on the ipad in front of him, takes his time. He is reading in the main bookstore of Ohio State University. He is standing in front of a darkened window that looks out over Columbus’s High Street and the Short North District, once an area that fell “short” of being respectable, now a haven for art galleries, bars and nightclubs. It is an area being reclaimed, but it is not so far away from parts of town where violence explodes regularly.

When Jamaal reads The Gun Joke, the commentary on intolerance, on violence and its consequence applies here in Columbus as much as in any American city. May begins speaking evenly, clearly, every word pronounced carefully:

It’s funny, she says, how many people are shocked

And his voice rises up in the space, climbing a helter-skelter of disturbing implications:

this is definitely not a joke, and then his laughter crackled

When she says it’s funny she means funny

as in crazy and crazy as in this shouldn’t happen.

This shouldn’t happen as in something is off. Funny as in

off—as in, ever since a small caliber bullet chipped his spine,

your small friend walks kinda’ funny and his smile is off.

The insistent, hard-hitting address that May uses to full effect is offset by the humility of his poetic persona. The person who speaks between poems is humble, modest, and unpretentious. In Ode to the White-Line-Swallowing Horizon, the speaker apologizes to the moths “that died in service/ to my windshield’s cross-country journey,” and to the “rest stop janitor.”

May tells us that he is also a musician: he plays guitar, and admits ruefully that he was not always good at transitions or at finding the pocket. Thinking about the spaces between notes, he explains, has helped to think about art in general. His musical practice has made him more comfortable with silences.

As in certain types of music, May is fond of improvisation. He takes his time in the gaps between poems, seemingly choosing the work he wants to read spontaneously. Later, he admits that he likes to surprise himself, to choose poems at the last minute that he wouldn’t normally read.

Listening to May read, you have a powerful sense of the genuine and authentic. When he reads political poems, his voice is full of outrage: as resonant as a preacher but not as sermonizing. Then come the intimate poems spoken in a quiet, knowing manner that enchants and mesmerizes.

needle in my sternum—

May’s performance of poems like I Do Have a Seam (quoted above and available on youtube here) gives the reading the feel of private conversation. When May recites the elegy Thalassophobia, Fear of the Sea, it is almost as though he is talking just to you, and such a style of performance allows the audience to enter into a private world:

is uneasy on your leg, my head against

your shoulder. You don’t find it heavy

at all. You’re singing.

Even in his tributes to other poets, May’s writing and delivery feel authentic. When he reads a poem dedicated to poets Matthew Olzmann and Tarfia Faizullah, the joyfulness of the writing is reminiscent of Marina Tsvetaeva’s great tribute to Blok, where she described the poet as “a piece of ice on the tongue.” In other words, the connection appears not sycophantic but genuine.

Near the end of the reading, a harsh burst of laughter breaks into a pause between poems. May remains unruffled. He thanks the audience for responding, for not being a blank wall. It makes him feel more comfortable. “I’d feel even more comfortable about now if someone’s cellphone would ring”, he jokes.

May thanks the audience for being present, for taking the time to sit in front of a physical human being and making that person the object of their undivided attention. Being present is important, and May emphasizes that the internet and the rise of technological devices cannot retain a monopoly on our attention. “When television was invented, everyone thought we would never listen to radio again. Too often we worry about the long-term consequences, when perhaps the repercussions are more prominent in the short term.” May’s performance works against distracting noise and demands that we remain present in moments of anger, outrage or quiet intimacy.

You can hear more on May’s work on his youtube channel here, follow him on twitter here, read more of his poems here, or find his first collection (HUM) here.

Editor’s note: this piece was written after a reading on January 16 at the Ohio State University bookstore and is being published now due my oversight – for this, I apologise.