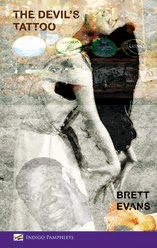 I am a Facebook friend of Brett Evans, as well as his publishers, so that in the time I’ve been reading The Devil’s Tattoo, I have learned about other reviews, and have been unable to resist looking. The reviews are strikingly positive and consistent: this is a very well-received publication. In keeping with the uniformity of its reception, the pamphlet itself, it seems to me, is particularly homogeneous. Most of the poems share a concern with loss of innocence, the disappointment of adulthood, the consolations and exacerbations of drink. Many also share settings and motifs: shabby pubs and streets enlivened with jazz and dance, washed by rain and rivers, coloured by cowboys.

I don’t wish to suggest that each poem cannot stand alone (a number have been published in good magazines). Nevertheless, after several readings, I found that the poems tend to coalesce, like fried egg and baked beans, each affecting the flavour and texture of the others.

There’s nothing but waiting around to die, so you choose
how to spend that time: swatting flies on your stubbled
throat whilst waiting for a train or riding through
this one-horse world, hell-bent on creed or trouble.

That cowboy leaning on a fence is vividly and playfully conjured: yes he’s a poet, but isn’t he also a scarecrow, watchful but ultimately helpless?

Reaping nothing from what’s been sown,
arms outstretched, forsaken,
he wears his unkempt crown…

When we meet Evans’s fellow countryman and drinker Dylan Thomas (through Augustus John’s familiar portrait), it’s not so strange.

It’s not so strange, the opinion that a poet needs to be slapped,
but the desire to kiss you, Thomas, winded me like a shovel-hook.
Those two red, too red lips that had mothered vowels and spat
consonants; those ‘hold that pose while the artist fucks
your wife-to-be’ eyes, of course, betray no surprise.

— ‘Portrait of Dylan Thomas, oil on canvas by Augustus John’.

His eyes may have died a little, and for good reason, but those full lips, aren’t they just as musical as Satchmo’s? Wasn’t Thomas a kind of jazzman, and mightn’t our poet have put these words into his mouth rather than Armstrong’s:

No wondering why I’ve spent the lonely nights
dreaming of a song: too many days conducted
beating the Devil’s tattoo on the bars.

The hard-drinking life is like stepping across a river on stones, ‘not quite walking on water’ (neat), and also like the rain itself, which ‘pours, falls, calms / then pours again’. Finally, isn’t being in bed with Ma Rainey, who ‘knew she was the most beautiful of ugly things’, a dream version of lounging in the bath with Sean O’Brien? In these cases and others, there’s a synergy at work: metaphors become metaphors for metaphors.

I hope these quotations also illustrate something of Evans’s style. Most of his poems are free verse, in plain-but-sharp, natural English. There’s not so much polish as a kind of twinkling scruffiness, the lyricism of a street musician. The poetic effects, the metaphors and surprises, are at the level of the whole poem as much as the individual phrase. Evans has a preference for rather long sentences, punctuated with a colon or semi-colon, which marks an expansion of or a caption for what has just been described. I think this particular sentence structure might be over-used, as if syntactic consistency were needed to match the semantic.

A one-poem book for the one-horse world, then, to stretch a point. But it’s an interesting and affecting poem, resigned, even self-eviscerating, but also tender and warm, bubbling with an art-lover’s enthusiasms. 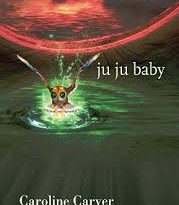