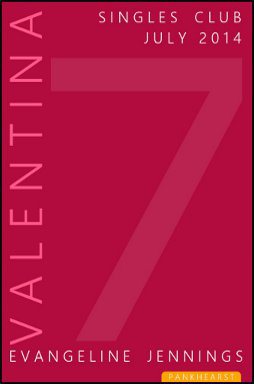 It’s not an unusual premise for a story: a beautiful exotic young women in beautiful California, with a sampling of simple charm, and sometimes graphic sex. These ingredients have been seen time and time again within literature, but author Evangeline Jennings does something a little bit different. With her novella Valentina, Jennings manages to turn this often familiar setting into something intricately darker. 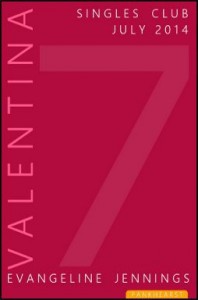 Besides Valentina, Jennings is the writer and editor of a handful of novellas and books, including Heathers, a collection of short stories, for teenagers and about teenagers, which she co-edited with Lucy Middlemass. She is also the founding editor of the writer’s collective, Pankhearst, and Valentina is the seventh, July edition novella of Pankhearst’s 2014 Singles Club, which published one short story or novella a month.

The title of Jennings’ novella comes from the protagonist, the alluring and mysterious Valentina. Valentina arrives in Santa Monica, just before Valentine’s Day, for a wedding. Early on she appears to simply be a compulsive liar, and arguably a borderline nymphomaniac. She ‘borrows’ all sorts of things: a jacket, pants, cash, and names. She also knows how to get what she wants by use of her long legs, athletic body, and suggestive smile: Valentina has a fling with a married couple, and once she reaches Los Angeles, she doesn’t even need to bother finding a hotel, as she quickly finds a man who will take her in, with the strong suggestion that it’s in exchange for sex.

But Jennings doesn’t leave it at that, as she is a master of the novella. Jennings reels you in, and in just a few pages she manages to sketch the outline of a complex character. Not until midway through are the seductive and uncompromising colours of Valentina the character filled in, making Valentina a subtly dark and violent work of fiction.

But even though Valentina is littered with bodies and brutality, Jennings weaves in a tender, queer love affair, with a woman named Valerie. This love story manages to steal the spotlight of the novella. Jennings sets the complementing and necessary romance up gracefully, and sometimes with strong imagery: ‘Their coming together could have been choreographed. After ten minutes of swimming lazy lengths, they both sat on the bottom in the shallow end.’

This romance acts as a pivotal change for the assertive Valentina, as all romances do. She had originally gone to Los Angeles for a strong, personal reason, but her newfound love rocks her world. Even though Valentina is a dominating figure in the relationship, she opens up to Valerie, allowing her truth to be exposed.

The concise style Valentina is written in suits it perfectly, as Jennings leaves tiny glimpses into Valentina’s recent past and tragic personal history. These clues will make you wonder more about Valentina, and why she is the way she is. But Jenning’s style only further complements Valentina, and it is because of this arcane character which makes Valentina a fulfilling novella.