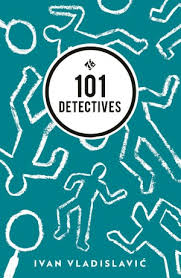 101 Detectives is a collection of short stories far from the formulaic state of most mystery writing. The stories are written by Ivan Vladislavić, who has an impressive career spanning several short story collections and novels up to this point. In this collection the stories are often thematically each very different from each other; although they do all pitch these ideas with the same Nordic noir tone. Everything in them seems stormy and your imagination is given a blue filter as you picture the characters and events. However the stories also have a lower tone of capitalism and corruption which moves their atmosphere closer to the American drama True Detective. Alongside this the stories do reference each other and can be bound together as explorations of the same dark world.

It is hard to discuss mystery writing without reference to other forms of the genre. However the stories in this collection are perfectly capable of working on more than one level. In places their eerie, detail-orientated description of the sparse environments involved stand by themselves as a form of poetry. A particularly potent example of this is the story ‘Lullaby’ which begins with a delicate description of human bones that are reminiscent of anorexia, something that becomes the backbone for the rest of the rather grim tale.

Meanwhile ‘Industrial Theatre’ brings a political aspect to the collection. It quietly comments on arts cuts and the way ‘bohemian’ groups of people tend to move into cheap areas and adapt them into impressive places that they can then no longer afford to live in. The story is a commentary on the general public’s wavering interested in art and the bohemian life.

Near the middle of the collection the surrealism of the stories intensifies. It is a soft centre of bizarre happenings and crimes. It makes the entire collection have an interesting consistency as it travels deeper into the rabbit hole and then brings itself back to the surface again. These strange events happen amongst the most innocuous of settings. Many of the stories take place in a household environment.

In other stories, Vladislavić plays with form, giving us another dimension to his world. These experiments, for example the letters in the story ‘Dead Letters’, often relate back to the narrative in the more traditionally told stories. This creates a situation of suspended belief that stretches beyond the reality of reading a book, and makes the stories seem as if they are a genuine world that Vladislavić may have visited and chose to write about in detail. There are also stories written in part or in whole in the form of some kind of journalistic article.

Overall the collection is a highly creative take on the established mystery model. It can be read with much interest from start to end; or in small goes maybe on a bus to work, especially as the stories are finely pruned so that they are as short as possible. The atmosphere of the stories makes them very relevant to the modern detective genre; but also makes them into interesting works of literature, with the many layers to go with that status.