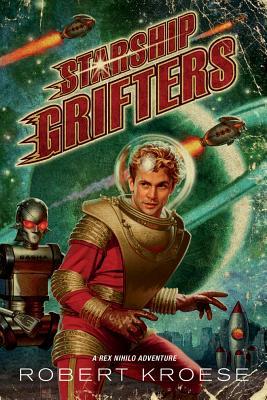 I have to admit, I came to this book with certain expectations, as I enjoy sci-fi. Though I soon found it wasn’t the sort of thing I’d usually go for, it didn’t let me down – how could I not enjoy a book where someone wins an entire planet in a card game? 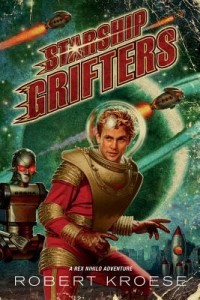 Starship Grifters is a short novella, that gets going immediately after a very brief introductory section. This is certainly a boon in this sort of fast-paced comedic sci-fi adventure, where the reader will be looking for laughs, and to be wowed by the exploits of the nefarious Rex Nihilo, not for a detailed history of how Rex got to be the man he is today.

Told from the point of view of Sasha, a near-sentient robot, whose programming forces her to reboot whenever she comes close to having an original thought, this story is told in classic Star Wars-style (a long time ago in a galaxy far far away). In fact, there is a great deal of Star Wars parody in this book, which anyone familiar with that universe will be bound to pick up on and, probably, appreciate.

The short intro gives us a micro-history of the galaxy as it stands in the 31st century, before we find out who and what the story will actually be dealing with. This is a useful device – it hooks the reader, as well as providing the opportunity to weave the backstory through the main story, keeping us interested without flashbacks and asides. It also sets the tone of the book, with ridiculous hyper-inflation and ridiculous ineptitude forming the first of the funnies.

With alien species resembling insects, gelatinous goo and – yes, really – a deck of playing cards, Robert Kroese creates a universe populated with individuals so bizarre they are believable. Not shying away, he holds on to the farcical tone throughout, pulling it off in a way that would do Douglas Adams proud.

Names are chosen with a sharp wit, such as a starship called the Flagrante Delicto, and the amazing General Issimo. Always tongue in cheek, they somehow manage to not pull the reader out of the story, getting a laugh without losing the audience’s attention.

Footnotes in a novel are often somewhat of a bone of contention. I tend to enjoy them, and found that Kroese’s footnotes added a knowledgeable and amusing additional narrative voice, giving us handy insights and anecdotes, which, though not necessary to the story, add flavour and occasionally made me laugh out loud. The idea of the ‘Strong Misanthropic Principle, which asserts that the universe exists in order to screw with us’, for example, is brilliant.

Starship Grifters is eloquently and professionally written – it comes across as the finished product, albeit a pulp-style product, which its 50s-style cover already clearly marks it out as. The short, sharp sentences paired with a full but not pretentious vocabulary make it pleasant to read, as well as funny.

All in all, this is a good read, and I’d be happy to see more of Kroese’s work. If you’re a fan of sci-fi, especially sci-fi farce such as Douglas Adams’ work, then I certainly recommend this book. It is a quick read, and though you might spend some time wondering what the hell it was you just read, I’m pretty sure you’ll come out at the end having enjoyed it, and recommending it to others.