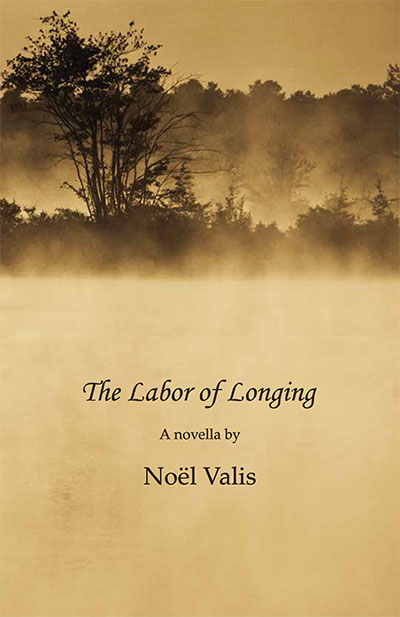 Those thoughts of ours, the ones that, if they do not haunt us, do whisper to us in a way which causes one to pause and reconsider some moment, some decision, some action of one’s life—those pangs of shiftless consciousness carry both the theme, and many ways, the plot of Noël Valis’s story, entitled The Labor of Longing: A Novella. The story crafted here, one set in the 1880s-90s, alternating between the barren pinelands of rural New Jersey and the city of Philadelphia, is one that is vivid and smartly written. 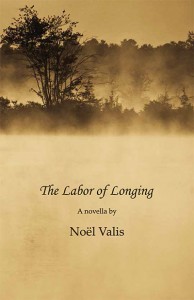 The language of Valis is pleasing. Many a passage or turn of phrase will make the reader wish to stop and reread what she has just read; though this is not done in an annoying way, as if it somehow breaks up the narrative, but in manner which is thought-provoking and, as a literary device, simply useful because the reader is impelled to empathize and re-empathize with a particular character.

Our inner librarian might be tempted to catalogue this story as magical realism. But this reviewer wishes to resist the urge to do so. Those elements that are magical for the characters of the story are probably better understood as psychological or, perhaps, pathological, but not preternatural. The title of the story is a very good one in this sense. For the act longing is nothing that is, in and of itself, outside the realm of a humanistic or social scientific understanding of the human condition.

A reluctance to emphasize the otherworldly elements of the story may be a bold interpretation to hold on the way that Valis composes the character of, say, Abby, since the young Abby’s true voice is only heard after she is dead. But it is a voice that is confident and controlled only as much as the voice is ascertained via the thoughts of another main character of the story in the person of Jonah.

In this respect of voice, Valis shines as a writer.

The story’s initial introduction of Jonah has us learning about his poverty and fitful upbringing amidst rural New Jersey in the third-person. But when the character of Abby, the first (only?) love of Jonah’s life, is examined in any detail, our author switches to a first-person narrative centered on Abby’s vantage point, one that continues and grows in importance only after her physical being passes away. This third-to-first-to-third-person oscillation is masterfully done by Valis.

Along with the head-hopping between not just Jonah and Abby, but also between the characters of the Italian peasant immigrants later in the story, this alternating from third- to first-person narrative is useful because it helps to understand the sense of longing that pervades all of the agents of this story. Because of the subtle change to first-person with Abby, this reviewer made an immediate connection with her. Whereas all the characters maintained something like an empathic distance, Abby drew me in to her outlook. It becomes easy to want her to succeed in escaping those appetencies which hound her whole being, despite the fact that in the end, at least on our physical plane anyway, she so very much loses in that desire toward flight.

For anyone who has spent time in the contemporary Global South—in any of the developing nations of Latin America, Africa, or Asia—this story also serves as a good reminder that North America was once a ‘developing nation’ as well. The poverty of all of the main characters is palpable. But it also a historical poverty that is at one and the same time similar to, yet also very different from, the inner-city poverty or regressive, backwoods poverty of the some parts of America today.

Valis uses the phrase ‘scrabble poor’ to refer to those characters in the story without a cent to their name. ‘Scrabble poor’ is a wonderful term because it uniquely captures a kind of poverty that distinguishes it both from the old-world peasantry of an immigrant character like Settimo in the story or from the poverty that would have been associated with the color-coded slavery that was still within generational reach of those declining years of the 19th century. By being “scrabble poor” one still has the opportunity to, well, scrabble together a future that is, economically at least, richer than the hopelessness that is institutionalized in the poverty of peasantry or slavery. It is also a very American kind of poverty. Case in point is the Italian immigrant Settimo and his family. In the North of Italy, what would have been a peasant’s existence is, at the very least, upgraded to that of ‘scrabble poor’ for those who were able to survive the insalubrity of transatlantic steerage. The character Jonah is able to scrabble together a fortune in Philadelphia that allows him to return to the pine barrens of New Jersey as, if not a new man, then a very wealthy one.

Overall, this reader enjoyed the short novel and wishes that it could have been a tad bit longer. Particularly with the character of Abby. The more we read of her, the more the engaging the story became. Of all the characters, the Jonah is the least likable. But this only assists in the acceptance and respect of Abby and her labour of longing.

One thought on “The Labor of Longing: A Novella by Noël Valis”