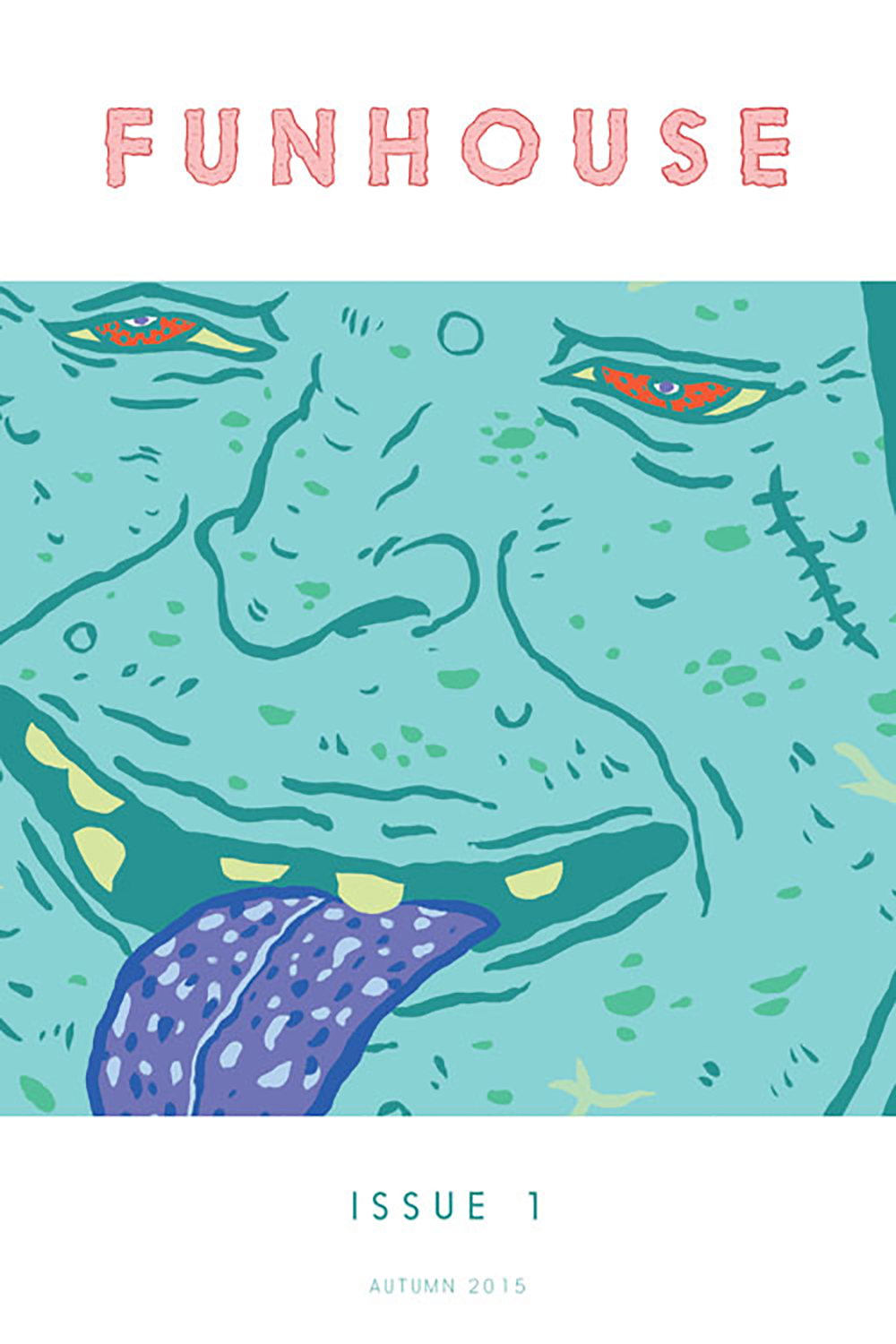 Funhouse Magazine, with its first instalment, is purposely playful, light-hearted and experimental; it engages with the surreal and the profane rather than adhering to the model of character-driven narrative fiction. Fun is a primary objective, and hopefully, with their combination of comics, fiction and illustration it doesn’t leave the reader disappointed. 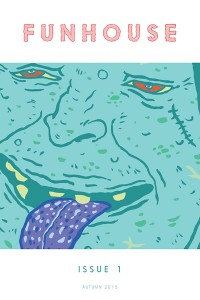 At 90 pages there’s a lot to delve into and a quick flick through illustrates that the visual takes up a large proportion of this issue: prints, illustrations and comic strips lie among the poems and short stories. Most of these are comedic in tone. Guy Field’s crude punched faces feature contorted cheeks and flying teeth; whilst Sebastian Schwamm twists and distorts the body in his Philip Guston-like illustrations. Alex Widdowson – credited as a comic in the edition – provides us with a comic strip, coming of-of-age story. It follows two boys from birth to famous singing eunuchs via a self-afflicted castration in the face of pubescent confusion. It is a humourous, light-hearted piece even with its plot of severed testicles.

And the body is a recurrent theme through-out the magazine, explored also in many of the short stories. Mutilation, transformation and disfigurement are popular themes. Patty Cottrell authors, ‘The Woman Turned into a Jar’, (narrative as title suggests) is a short, simple, fairy-tale-like digression. Jason Schwarz has contributed, ‘Decorum in the Fall’, a rich, descriptive journey through the ‘feast of the beheading’, travelling across the table littered with a rich array of food finally arriving at a head upon a spike.

These are short, abstract pieces – as is the case in most of the fiction in Funhouse. The task of grabbing the reader’s attention can be difficult in such a format, but Christopher Linforth’s short story is one that stands-out as a piece with an enticing central concept and uses alluring prose to realise it. ‘Meme’ involves children with an absent father surfing the net and knowing of his presence online. It darts from the screen to memory to reality, beautifully describing the individuals involved:

She has too much sadness and she aches in her joints and in the part of her head where she loves us. She pretends not to think about her father or our old lives or the echocardiogram of an arrhythmic foetus heart

I think the finest piece of Funhouse 1 is, ironically, the one that least conforms to their light-hearted ethic, and that is ‘Rabidity’, by Adam Tedesco. Although it is described as an essay, it is more like a work of creative non-fiction- somewhere between a biographic piece, historical reflection and short story. The narrative traces a variety of visitors to the author’s childhood home. We witness the appearance of desperate tramps, swarms of bats, the FBI and a rabid raccoon. It is an affecting and splendidly written tale culminating in the destruction of a nest of raccoon cubs on which the writer reflects:

I think about those cubs every day. Every day I watch videos of police shootings…this is not to say I reduce every catastrophe, every slow genocide, to this one memory that means nothing to anyone but me…I don’t know how to keep a guarded heart in a rabid world.

Overall, Funhouse 1 is a valiant first effort and though the contributions are of varying quality it generally fulfils its aim of providing an interesting and unpretentious read. The pieces that stand out are those that have not sacrificed literary style in the quest for ‘fun’ reading, but mix innovation with an expansive use of language. There is, therefore, much to look forward to in Issue 2, especially if Funhouse tests its boundaries even more.