Nick Mulgrew, the brains behind new poetry publisher uHlanga, is determined to inject some vitality into the South African scene. ‘I was speaking to someone at a friend’s house yesterday’, he tells me, ‘who was telling me that South African poetry was getting tired, it’s the same writers, the same pandering, not as direct an engagement with politics.’ Mulgrew arrived on the scene co-founding the magazine Prufrock in 2013, and followed suit in 2014 when he founded uHlanga.

uHlanga was initially dreamed up as a magazine focusing on poetry inspired by or from the Kwazulu-Natal province, which is often ignored in South African poetry. ‘If you’re not in Cape Town or Johannesburg, that’s a real handicap’, Mulgrew says, ‘all the publishers, all the agents are in Johannesburg or Cape Town, if you don’t live in either you’re fucked. You need to get chummy with publishers to get them to read your manuscript. There’s a real problem in terms of readers, in terms of books sold, in terms of how books are sold. How do you make poetry accessible, more open, how do you make something for a south African context without imitating a British context?’ 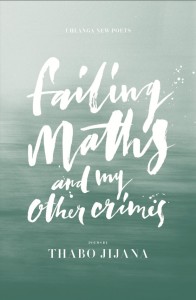 The launch for the inaugural issue of the magazine was upstaged by ‘a whole bunch of slam poets, freestyling near the stage’, which made Mulgrew rethink his strategy, and decide to concentrate on single author collections, under the same name. In 2015, uHlanga published three collections, Genna Gardini’s Matric Rage, Thabo Jijana, Failing Maths and My Other Crimes, and Mulgrew’s The Myth of This is That We’re All In This Together. All three are handsomely designed with strong typographical covers. He came across Jijana and Gardini’s work through editing magazines, and intends to continue curating his poetry list this way.This hasn’t stopped Mulgrew from receiving hundreds of manuscripts, ‘you can tell who is not reading local poetry because it’s as if they were writing from Mars. If someone was writing from Mars that would actually be more interesting, a different perspective.’

My death came for me when I turned twenty-eight.
It said “Look, I read all your poems,”
then apologized for being late.

All three are first collections, an approach Mulgrew thinks is effective, particularly as, unlike the UK, there isn’t a strong emphasis on promoting new writers on the South African scene. On the positives of working with first collections, Mulgrew says ‘there’s a lot of hype around them, their friends are interested, their families aren’t jaded yet by the prospect of yet another book, and you’re able to tap into that useful energy. I mean, Genna Gardini had an amazing readership already and that’s extraordinary for any poet.’ He thinks her success is in part due to the energy she puts into promoting her work, but mostly, ‘it’s because people can really tap into what she’s saying, and her aesthetic and her ideas. She has a lot of very cutting things to say about queerness and disability’. Jijana’s collection was more of a challenge to promote in that his initial readership was smaller, due to the fact that he lives on the Eastern Cape. 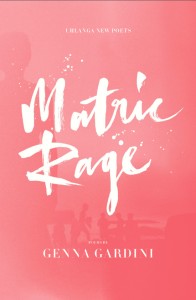 It’s always interesting to hear how poetry publishers manage to fund their ventures. Mulgrew succesfully ‘applied to the South African version of Arts Council [ed: Arts & Culture Trust], but this one’s a private one, it’s paired with a bank [ed: Nedbank Arts Affinity]’. It’s unusual for this funding body to support publishing, and Mulgrew hopes that getting funding for first collections will help to fund second ones. uHlanga is very much a one-man operation, with Mulgrew taking care of the editing, designing, typesetting, supervising the printing and so forth. He sees this as an advantage, ‘I don’t have to make any money, I just have to break even’. The poets receive 50% after the books have broken even, making this publishing venture more of a partnership between author and publisher. 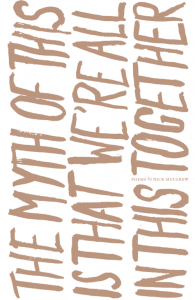 ‘We’re kind of in love with this 1960s idea that people can live off of being a poet, or a writer’, Mulgrew says, ‘when that’s demonstrably untrue. I know of three people who make a living from poetry here (so writing, teaching editing,…) and one of them died last year. So now there’s two I know personally.’

I pray I never take to poetry
as some people go to church
to run away from the things
on the street:
the loud music played from the boots
of the trendy cars
at the gumba-gumba everyone
will talk about
on Sunday morning
when morning service is over and a story
spreads through the township

It’s clear that Mulgrew wants to broaden the scope of poetry publishing locally, so I was intrigued to hear about the next new poet he is wanting to publish. ‘This is going to sound contradictory’, he tells me, ‘because she is in her seventies, but she’s never published a collection before, and she writes in Xhosa. She basically wrote poems and put them in a kist at the foot of her bed forever. Her daughter became friends with a friend of mine, and he convinced her to get hold of those poems and send them to us. They turned out to be urgent and wonderful, so with any luck we’re going to publish a collection of that, so uHlanga isn’t just English language collections. That’s another way I wanted to widen the scope of commercial and accessible poetry in South Africa: to publish in African languages, which have been neglected by most presses.’

‘With this book we will likely publish the poems side-by-side with translations, as a lot of these poems are riffs on Xhosa folk tales which have not yet been translated, so that would be a double benefit. We might not do that with future collections: people who don’t speak English in South Africa have had to deal for decades with things not being translated for them, so it’s OK to have something that has not been translated into English.’

There are famously 11 official languages in South Africa, which of these is Mulgrew familiar with? ‘I grew up learning Zulu, I speak very conversational Xhosa, I speak ok Afrikaans and ok French. A lot of people speak French here, you could probably do a decent living out of running a second-hand francophone bookshop here.’

things stolen: iMac with un-backed up work;
gold crucifix and chain, worn since sixteen;
two watches; hand-me down iPad, iPhone printed
with a photo of my ear so it played a trompe-l’oeil
whenever I spoke on it; miniature icon of Our Lady
from a small Provençal village, cast in silver, bras
en repose, engraved with the legend PROTEGEZ NOUS –
which obviously didn’t help. that, or
God doesn’t speak French.

The biggest challenge, Mulgrew says, is finding a way to fit between the very European tradition of print, and South Africa’s oral tradition (including praise singers). He says that ‘in their reception and the literary imaginary within South Africa, print is privileged and print is prestigious; oral poetry is far more recited and widely received. You have these two disparate forms and it’s like, how do I do this.’

His aim then, is to ‘publish what’s important to publish right now, what’s missing in the literary landscape. Things in African languages, things from liminal spaces, things from the subaltern.’

failing maths and my other crimes by Thabo Jijana

April 6, 2016 Editor Comments Off on failing maths and my other crimes by Thabo Jijana 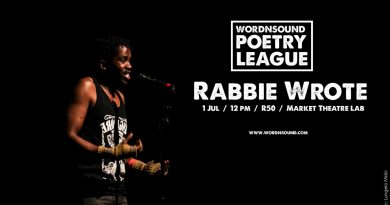