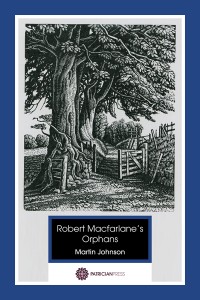 Like many readers of Robert Macfarlane, I enjoy his rich forages into British landscapes, sharing a deep and knowledgeable connection to their natural and cultural histories. He treads lightly between personal and collective experiences to reveal their intricacies and networks, so that what might have been familiar is thrown into sharper relief, greater significance. Would Martin Johnson’s Robert Macfarlane’s Orphans, drawn from Macfarlane’s work, take us further down this road? Would they shine with a fresh light, illuminating the original in a new dimension?

These poems “stem directly from a challenge to Macfarlane at a recent public lecture that he, like Edward Thomas, his great favourite, should release the poetry that lay undiscovered in his prose” of The Old Ways. Since Macfarlane didn’t take up the suggestion, Johnson (the challenger) took it upon himself, and gained Macfarlane’s permission to publish the results; an extract from the letter is included in the introduction.

As well as writing of ‘undiscovered poetry’ in Macfarlane’s prose, Johnson’s introduction states that ‘poems … unlocked from prose passages’ are ‘not much explored’ and, later, that: ‘Poems rarely tell stories’. It’s difficult not to raise eyebrows at this, but I warmed to Johnson’s enthusiastic tone in the direct addresses throughout the book, encouraging me to embrace the passion and motivation that instigated it.

Johnson, who refers himself as ‘midwife’, ‘novice writer’ and ‘unknown hack’, hopes for the poems to be read prior to the prose extracts from which they derive – as more than a literary experiment or an academic work – although there are notes accompanying each prose excerpt from The Old Ways describing Johnson’s process, inspiration or conclusion. In one instance he admits that the poem doesn’t work: it doesn’t, and it’s fascinating to work out why not. The personal pronoun is lost from the beginning of the extract, and this lyric quality in the prose is sheared from the resulting poem. ‘Facts’ of the prose are kept in the poem, but without the rhythm, tone and overarching ambience of the original, there are no subtle shadings. The sure location of narrator, his encompassing voice, hesitations, urgencies are gone, all of which contribute to pacing and effect. The poem becomes a two dimensional retelling of a rich and surreal story.

Johnson’s addresses and introduction give the sense of a literary experiment, complete with hypothesis, methodology and conclusions, which I found over-explained the work, as if doubting the readers’ ability to think for themselves. I wondered if the book would have been better served by a different layout: the poems presented, as desired, in their own right, and the inspiring prose as an appendix, which I could read in accompaniment to the poems, or afterwards. Set as they are, with the prose on the left page and the arising poem on its facing, it takes a conscious break with tradition and habit to not read the prose first. Worse, I found myself darting between prose and poem to scrutinise the differences, turning the experience from an act of immersive reading to something quietly disruptive.

The most successful poem, for me, was the first, which begins by lineating the prose:

So it was down, steeply down,
across shale slopes,
stones flowing in the sunlight,
horses skidding on front hooves,
braking with back hooves,

It transpires that Edward Thomas is the other progenitor of these ‘orphans’, via Matthew Hollis’s biography, Now all Roads Lead to France, and this is a poem extracted from Thomas’ prose work, ending on the glorious: ‘A pair of country wheels rolled by, late and slow’.

More often than not I wasn’t sure how far Johnson’s poems moved beyond the original prose passages: what did they add to the already insightful, rhythmic and atmospheric writing? Why do it, beyond the fact that you can? Calling the pieces ‘orphans’ suggests they have become creatures in their own right, distinct from their now ‘lost’ parents. These feel more like ‘mini me’s, dressed in miniature versions of their parents’ clothes. There is one poem, towards the end of the pamphlet, that is of Johnson’s own making, inspired by The Old Ways, but not working directly from a passage within it. This reveals Johnson’s own style to be prosey, reading like cut ups, settling into its rhythm eventually.

I wanted to be engaged, and in part, I was. I like the premise, was interested in Johnson’s thinking, and his exercise in exploring differences between poetic prose and prosaic poetry. It is an exercise, presented as one, and, I found, most rewarding if taken as one.

One thought on “Robert MacFarlane’s Orphans by Martin Johnson”