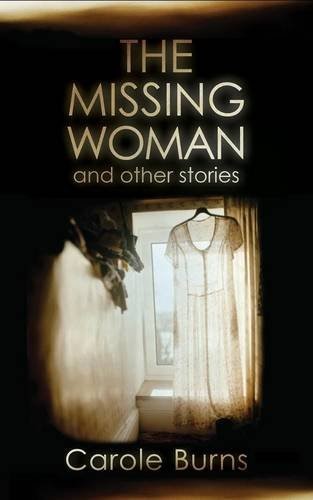 Carole Burns’s recently published collection, The Missing Woman and Other Stories, is a bite-size collection of wonderfully crafted fiction, fitting together with a commendable fluidity through the motif of the missing woman icon. While Burns returns to this figure – or rather, the absence of this figure – she incorporates this theme in a non-intrusive manner, allowing each individual piece to function independently from the theme whilst giving a gentle nod to those of us who are looking out for it. 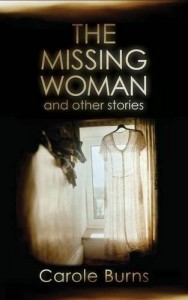 The opening piece – ‘The Missing Woman’ – sets a wonderfully eerie tone as we observe the action around a woman who has literally gone missing. However we also see a woman within a martial framework here who, between the subtly communicated push and pull of her desires versus the desires of her husband, appears to be a missing female as well, setting the tone for quietly communicated undertones of the theme throughout.

Throughout the whole collection Burns picks up and scatters various techniques allowing for an enjoyable variation in pace and tone from one story to the next. The concerned father in ‘Honour’s Daughter’, for example, who is nursing his ill daughter in his wife’s absence (a missing woman – the mother figure here is in rehab at the time of the story), strikes a heartbreaking note; in a different style, however, to the later ‘Changing Colour’ which introduces a relatable narrator who communicates her pain (here the missing woman is actually a missing child) through revisited memories and her sudden fascination with watching tulips blossom – something that the reader is equally fascinated by, by the end of the piece.

Readers of the collection will notice that one or two of the pieces here have in fact been written as a response to artwork. The neatly packaged ‘Lips’ and wonderfully written ‘Long Division’ are rooted in works of art, the specific details of which are cited by Burns in the book. The latter of these examples, for me, is one of the stand-out pieces of the collection; ‘Long Division’ has a wonderful sense of location communicated consistently throughout the story while the imagery communicated by the first-person narrative on discussing his wife is both innovative and endearing. On observing her the narrator comments: ‘She is slender but squared off somehow, like a long division symbol… I am tall and lanky like a quaver, and I worry sometimes that she can’t reach me. That she stops before I begin.’

Burns’s ability to manipulate the missing woman motif is a credit to this collection, also, allowing for the theme to be revisited time and time again but with a fresh method of communication. The wonderfully titled ‘My Life in Dog Years’ delivers an unexpected change of pace through the unfulfilled life of the protagonist while ‘Other Women’ switches the pace again with an eye-opening discussion – and some truly beautiful comments – about the expectations females have of each other, with an unexpectedly poignant ending in place here as well.

Another high point, for me, was delivered by ‘The One I Will’, which offers a narrative voice so severe and determined, the thought occurred to me that she would shake any reader aggressively by the shoulders whilst relaying this story in person. The final line of the opening paragraph establishes a menacing tone here with the narrator’s observation that: ‘I see he’d be the perfect victim.’ A sentiment communicated about a man she had not even made verbal contact with yet. This story, perhaps surprisingly, feels like one of the more emotional reads, particularly as the reader comes to terms with the underlying psychology of the character; not only that, though, the construction of it as a text is also stylistically stunning.

As a whole The Missing Woman and Other Stories is a neat collection that allows intricate snapshots of the social, emotional, and psychological issues that can surround woman in this era. Burns communicates each narrative convincingly, allowing each character their time in the proverbial spotlight, and overall this publication was a real pleasure to read.

All The Places We Lived by Richard Owain Roberts

July 8, 2015 dj4twinx Comments Off on All The Places We Lived by Richard Owain Roberts