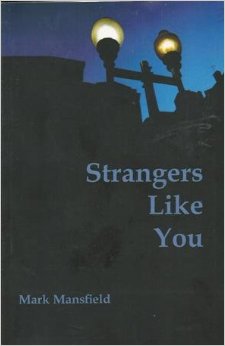 Dropped off by Dad, each summer,
we’d explore the wash house where she kept her jars.
Marooned miles from nowhere, we patrolled screen doors,
oven-hot shingle walls, or the cool of the porch
swing, shaded by trellis and vine, launching attacks
on grasshoppers, closed tightly as cocoons
[from ‘The Mantis’]

So begins Mark Mansfield’s Strangers Like You. The first splinter jutting out at an odd angle is the deliberate dropping of a verb at the start of the line, this is slightly unusual as most sentences in the English language begin with a subject (I wrote a poem, you wrote a poem etc). It is even more unusual given that it is the first line of the first poem. I can’t think of many collections that open with a verb. Why does Mark Mansfield do this? Push a verb to the front and it lends impact to the line (I just repeated the trick). Mansfield follows this up with the gentle but perceptible assonance running through the lines, notice how the woo and sh of ‘wash house where she’ works with the contrasting vowel sounds lifting each other up.

Mark Mansfield is a poet with a painterly eye and a neat touch. The qualities evident in the opening poem are on display throughout the 85 pages of the collection, however perhaps the most striking aspect of Mansfield’s writing style is that there is nothing really that striking about it. He speaks with a quiet beauty, his placement and weighting of words astute and delicate. This lends an important quality to his poetry: cadence. When a poet gets a full grasp on the pace and heft of words, the effect can be sublime. For example, lend your ears to one of the masters of cadence, Louis MacNeice:

The room was suddenly rich and the great bay-window was
Spawning snow and pink roses against it
Soundlessly collateral and incompatible:
World is suddener than we fancy it.
[from ‘Snow’]

‘Soundlessly collateral and incompatible’: three syllables, four syllables, break, five syllables, with all the vowel and consonant sounds working in harmony. In an ideal world poets would be able to arrange a wall of words as well as composers arrange a wall of sound, but not enough contemporary poets pay the necessary amount of attention to cadence. Fortunately, Mark Mansfield does:

Every now and then, he sails too close.
The moon glares like a searchlight on a camp
while his furtive silhouette flits like a moth
our vision for a millisecond weaves.
[from ‘Charon’]

Mansfield’s kind kiss of assonance springs alive again in the l’s of ‘furtive silhouette flits’. The lines have a soft grace, like a moon landing on a moon. Strangers Like You is a book of absences, of feelings that are faded or no longer there, of places known from memory that have changed. At times his sadness gives him the desire to join American literature’s ‘all male heavy drinking club’. In poems like ‘Night Jasmine, Angel Baby’, ‘Pythagoras’ and ‘Good Guys’, he offers a toast:

Here’s to some of the bars where I used to drink.
Many are gone, but one may still be thriving
when the Last Call of last calls turns up its lights.
[from ‘Good Guys’]

Applications for this club should be sent on rum soaked napkins to club secretaries Bukowski, Hemingway and Carver. Hopefully, your application will be lost in the post. Although there is certainly the thrill of the real in Mansfield’s drinking poems, the manly posturing is a little old fashioned. Heavy drinking is anathema to poetic success, and it certainly doesn’t help your cadence. Although Mansfield’s poetry is very well made, Strangers Like You could be even better if he spent more time in the library and less time in the bar.

Mark Mansfield is not a very well-known writer. I think it is a terrible shame that such finely crafted poetry has not found a wider readership, but at the same time I don’t find it at all surprising. There is almost no correlation between the sales of a book and its quality. Some very good contemporary poets have made little or no impression in the average, or even well-read, person’s consciousness (to remedy this read Ralph Hawkins, read H.L. Hix, read Martin Stannard, read Simon Perchik, read Olena Kalytiak Davis). Mark Mansfield deserves to be the next voice in your ear because even though his words are quiet, they are worth listening to. 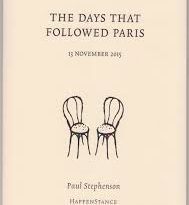 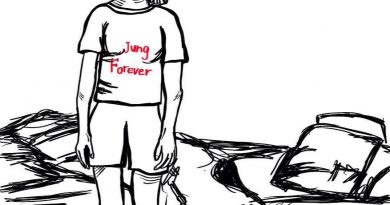