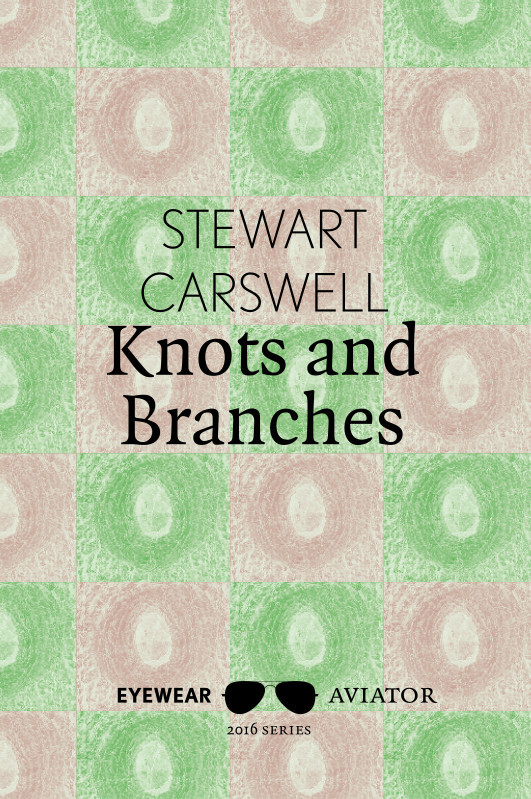 Knots and Branches showcases Stewart Carswell’s talent for keen observation of the natural world. The forest in all its weather breaks into poems which deal with relationships and loss. This is a pamphlet that infuses the everyday with a sense of the wildness that has permeated English literature for centuries, finding its fullest flowering in the unsettling middle English poem Sir Gawain and the Green Knight. As with the Gawain-poet’s work, Carswell’s vision of nature is both strange and beautiful. His opening poem ‘The Wedding Present’ offers an acorn as a wedding gift, imagining the oak wood that spreads around the lovers’ house as a mysterious but grounding presence:

Fawns do not stay, but you will find
a set of antlers each year
outside your door. Oak is a marker
for home, and marks the starting point.

Nature is not always a benevolent presence, demonstrating both its mercilessness and its trickster potential. Imagery evokes the darkened forests of Grimm’s fairy tales in the title poem ‘Knots and Branches’, which imagines a bride coyly shielding “her finger/ banded by a knot of gold”, only to suggest something darker, with the bride absent by the final stanza:

The only tie to believe in is at the roadside:
a pink ribbon, knotted around the trunk,
that matches her bouquet.

Carswell relishes a deeper exploration of the English mythos in the intriguing sequence ‘Far Into the Deep Forest’, with its elusive many-coloured harts/ hearts, each of which reveals a different stratum of English industry. Here is a poet deeply concerned with craftsmanship and the interaction between people and the landscape, and Carswell avoids the temptation to paint the landscape as some kind of pastoral idyll. Even in the depths of the forest, the reader is advised to “forge a tool,/ leave your mark.” (‘Red Hart’)

The red hart leads to an iron smelting ground, while the white and then the black bring us underground to abandoned mine shafts. Here, the poet recognizes a mirror to his own craft as a ghost-miner advises him:

You must make your living somehow, old butty,
just like we’ve had to do here.
But find some other fuel to work from, mind.

Carswell also has a background in science, and at times his engagement with nature comes stripped of any mythological dressing, in clear-eyed poems which engage with the minute processes of change and becoming. In ‘Locked Pools’ the earth outside is “locked by frost”, unable to shake off its wintry blanket. Indoors however, humankind has the potential to put a halt on winter, if love does its job:

…we have no choice
but to settle for ourselves,
and if there is still no warmth
there will be no thaw.

Carswell is as keen an observer of people as the natural world, and through the lens of his poems people and their skills become timeless, adrift in a constantly-evolving history that finds moments of confluence when traditions are upheld:

And they’re expected to do this,
like their father in his father’s overalls,
to mend fractures and tend to bedsides. (‘Beard & Sons’)

Knots and Branches is a confident debut and these accessible poems unfold on repeat readings, revealing a thematic ambition that is sure to yield many more fine poems.