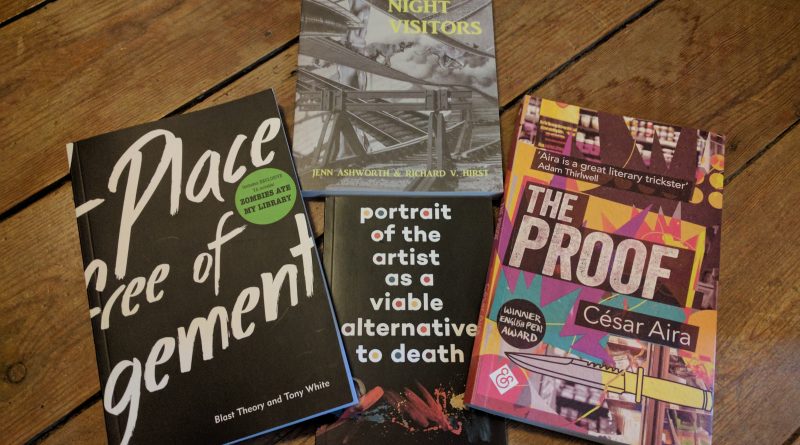 This year’s best novella shortlist includes a translation, a collaboration, and plenty of genre-defying action. Check out the list and don’t forget to vote for your favourite by 30th April!

The arrival of Missives by Aliya Whiteley (Unsung Stories)

I’m delighted that The Arrival of Missives has made the shortlist for Best Novella in the Saboteur Awards; I loved writing it, so it’s brilliant to think people have enjoyed reading it. -Aliya Whiteley

It’s such a striking book, showing Aliya at her best – mixing the unlikeliest of influences and showing how perfectly they fit.
So to know people out loved it as much as we do is wonderful. – George Sandison, Unsung Stories 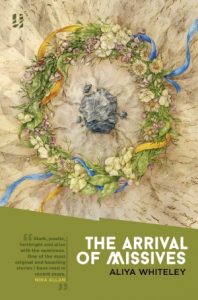 “The Arrival of Missives is a genre-defying story of fate, free-will and the choices we make in life. In the aftermath of the Great War, Shirley Fearn dreams of challenging the conventions of rural England, where life is as predictable as the changing of the seasons.

The scarred veteran Mr. Tiller, left disfigured by an impossible accident on the battlefields of France, brings with him a message: part prophecy, part warning. Will it prevent her mastering her own destiny?”

Delighted, and honoured to be in such excellent company. -Jenn Ashworth

With so many entries it’s a real honour for myself and Jenn to shortlisted. I’m impressed and frankly a little intimidated by the quality and variety of our fellow nominees and am looking forward to meeting them. -Richard Hirst 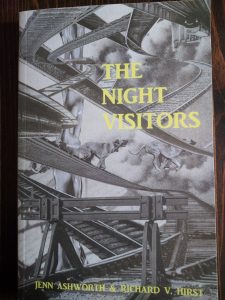 The Night Visitors is a story of ghosts, technology and obsession. It’s told entirely via an exchange of emails between two women connected by a silent film star who fled the scene of a gruesome unsolved crime in 1917.

“I’m a writer based in Manchester. I’m one of the founders of Curious Tales, an independent publisher. I write about film for the Quietus, short stories for anyone who asks and have had my work published in the Big Issue, Time Out and the Guardian amongst others. Along with Jenn Ashworth, I’m the co-author of Bus Station: Unbound, a choose-your-own-adventure-style novel set in Preston Bus Station, and our shortlisted novella, The Night Visitors.” -Richard Hirst

For more on Jenn, see jennashworth.co.uk/press

Why voters think it should win

I am overwhelmed and excited to be shortlisted. Very grateful for everyone who voted for me. – Ross McCleary 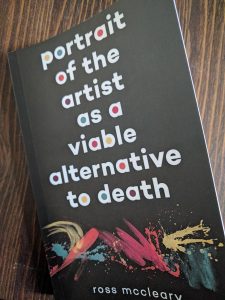 Portrait of the Artist as a Viable Alternative to Death is a one-sided conversation, an artistic manifesto, and a desperate plea to be saved. The Artist holds forth on a wide spectrum of topics from car crashes to hot air balloons to the strained relationship he has with his daughter. He explains his artistic process, the works he has produced, and the dark places he goes when he is making it. We’re all dying but his art can save us, or at least that’s what he says…

Keep in touch with Ross here.

The Proof by César Aira, trans. Nick Caistor (And other stories)

We’re really chuffed that César Aira’s The Proof on the Saboteur Awards Best Novella shortlist. The Saboteur Awards are such an exciting celebration of great literature beyond the mainstream, a description that perfectly sums up Aira’s work. -Nichola Smalley 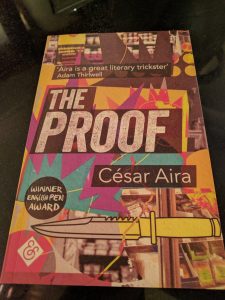 Marcia is sixteen and unhappy. One day, she hears a shout: ‘Wannafuck?’ Startled, she turns and is confronted by punk girls Lenin and Mao. She’s soon beguiled, but her new friends have little time for philosophical discussions of love: they need proof of it, and gripped by their own savage logic the duo stage a hold-up in an unforgettable splatterfest finale.

César Aira is the author of around 80 books. The Argentinian’s writing is considered to be among the most important and influential in Latin America today, marked by extreme eccentricity and innovation, and a playful spirit. He is without a doubt the true heir to Jorge Luís Borges’ literature of ideas. As Patti Smith says: ‘Hail César!'”

“I love the Saboteur Awards with their focus on emerging practice, collaboration, small presses and the spoken word scene, so I am delighted that Zombies Ate My Library has been shortlisted for best novella. This shortlisting shines a welcome light on the ambitious collaboration (with Blast Theory, Arts Connect, ASCEL, librarians and young people) that the novella grew out of, and I am very grateful to all involved. Thank you!” -Tony White 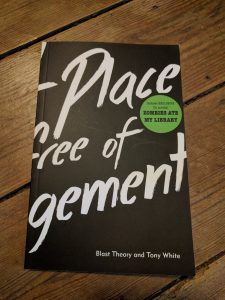 “Tony White is the author of novels including Foxy-T and forthcoming The Fountain in the Forest (both Faber and Faber). White is a former writer in residence at the Science Museum.

White’s latest novella, Zombies Ate My Library, was commissioned for a collaboration with the artists Blast Theory and 30 young people in libraries in Telford, Worcester and Cannock.

Set against a backdrop of nationwide library closures, ‘Zombies Ate My Library’ follows the lives of four young people in the West Midlands—Alice, Gareth, Tommy and Rukhsana—as they plot a sleepover in a haunted library. What could possibly go wrong?” 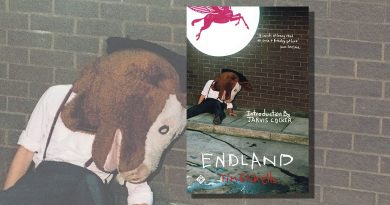 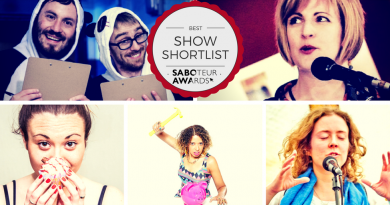