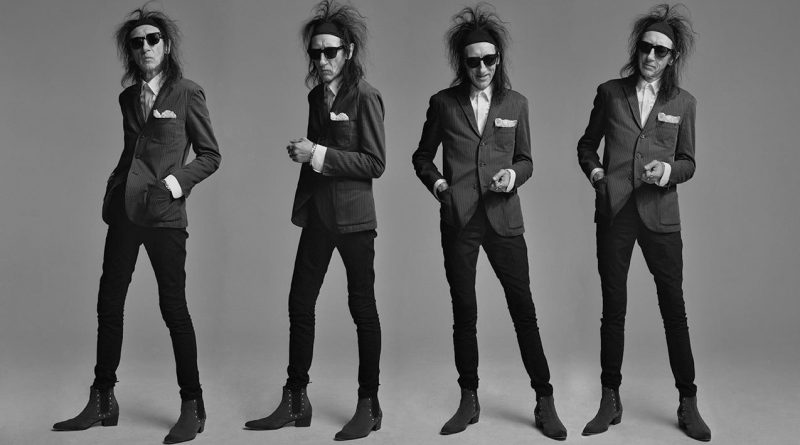 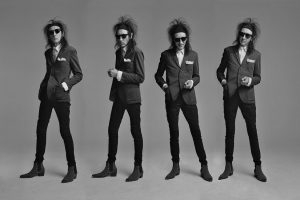 Located at the Firestation Arts Centre (just a few minutes’ walk from Windsor Castle), it would be hard to find another setting further removed from the 70s inner city deprivation where Dr Cooper Clarke’s accessible, acidic poetry first gestated. If Manchester was once (evidently) a ‘Chicken Town’, then Windsor is (quintessentially) a Chicken Kiev, perhaps even Poulet de Provencal. Some people might cast dispersions to what a Windsor audience will be. The affluent and jewelry shakers are elsewhere tonight. The audience is beatniks, Freaknicks and geeknicks joined by a few retired punks and a scattering of youths.  Respectable enough to be permitted to carry glass bottles in the auditorium, and too polite to gob. The type of audience that is too rock n roll to throw flowers and a little too repressed to throw shapes.

The next generation of punk poets…

Dr John Coooper Clarke is now a respectable and celebrated establishment poet, a popular pop culture icon whose poetry is on the school curriculum.  A cynic might think that they have gathered here tonight to hear old familiar favorites: a cynic would be wrong.

Tonight’s audience gather in the intimate, sweltering and sweaty auditorium for a gig that starts with the excellent Nymphs and Thug’s poet Toria Garbutt. If there is a natural successor to the legacy of J.C.C. then Toria Garbutt could be it.  At first impression, rhyming in a thick Leeds accent, she could almost be mistaken for an apprentice Cooper Clarke. Robin to his Batman. However, all these likenesses quickly dissipate as the modern northern poet takes the minds and imaginations of the audience on a helter-skelter joyride.  She takes us speeding on journeys through the deprived council estates of nineties Britain, over the fence of Glastonbury and down roads where vandalized street lights cast shadows tinged with sadness.  Her voice is very much her own and her poetry is as bleak as it is beautiful.

The second support poet comes in the form of Mike Garry, a native of Manchester (not Salford). Dr Mike Garry commands an audience with a stern school master’s authority (a persona that one suspects he has developed in his years as a librarian and his work in various schools). His set begins with uncomfortable truths and challenging themes; he reminds us all of our unspoken-ability to stay silent in the face of tyranny.  For the early part of his reading, it feels as if middle class guilt is being reprimanded.  As the set progressed, however, Garry seemed to warm to the audience; he shared intimate poems about his son and a celebratory eulogy to his Mother. It was as if, after a reserved introduction, we had become friends.  He even invited the audience to say hello if we ever saw him passing in Windsor. His poem for Tony Wilson was a rhythmic celebration of a legend and a perfect ending to a spirit-lifting set.

And the man himself…

By now the audience was ready for the main act.  It is a testament to J.C.C. that he is at ease headlining two exceptional performance poets and social commentators.

There was a brief break and then the headliner walked into the spotlight.  He is still an otherworldly figure, never standing still and moving around the microphone like a boxer dancing in a ring.

As the evening passed, it became clear that he still enjoys his sets. He trialled new poems, delivered surreal jokes, shared stories; some true, some you wished were true and some you hoped weren’t.  ‘Warm’ was a word that described the evening. The old favorites were met with cheers.  ‘Beasley Street’ was delivered with a tight tempo.  It was followed by ‘Beasley Boulevard’, a poem that touched on the negatives of city regeneration.

A performance poet’s new work has to be tested on a live audience, and that audience did seem a tad confused by an overly long poem about Tasers. But other new poems resonated far better; these included a literal interpretation of P.C. gone mad and the negatives of being a driver. It occurred to me quite quickly that, perhaps, John Cooper Clarke does not need to reflect the world we live in: his appeal is an ability to transport an audience to a world that only he inhabits.  It is a world that is timeless and can flit between humbling the highbrow and lifting the low. A world where laughter is always mixed up with sorrow.

The set ended with two crowd favourites. First: a speedily delivered rendition of ‘Chicken Town’ (including lines that I swear were not there the last time I heard it), which you could tell the crowd were yearning to hear.

Second: he gave us a unique encore.  After an audience member called Sharon handed him a hand-knitted Cooper Clarke doll (complete with high standing hair and drainpipes), he dedicated ‘I wanna be yours’ to her. 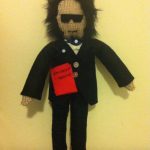 There was one final cheer and he was gone.  The lights came on and the sound of ‘Danke Schoen’ filled the quickly emptying auditorium.  Did the crowed want more? Most probably. Did they clap until they got more? No.  This is after all a week night. They left in an orderly fashion, tip toeing into the clean warm Windsor streets, repressing the urge to shout Bravo.

Dr Cooper Clarke is on tour until November and you can find details of upcoming gigs here. 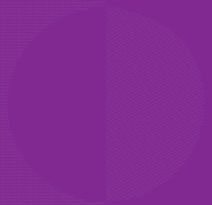 The Sky Is Cracked by Sarah L Dixon

January 6, 2018 Becky Varley-Winter Comments Off on The Sky Is Cracked by Sarah L Dixon