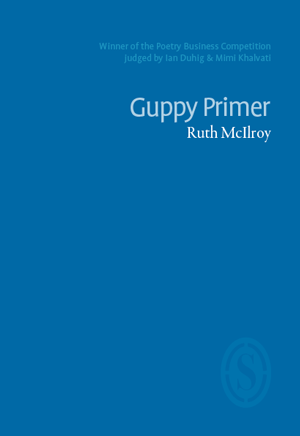 Ruth McIlroy’s 2017-Poetry-Business-competition-winning pamphlet, Guppy Primer, is a game of many halves. While mathematics only allows for two halves in any given whole, here McIlroy keeps adding half to half to half, resulting in a multifarious hodgepodge of style and voice, with something surely resembling dark magic added to the mix.

‘I am not Honest’, explains the first poem – a helpful immersion into this strange whirlpool of a pamphlet. ‘I do not suffer fools; / I suffer larks.’ It is well to remember this – the fact that a puzzle is intended to amuse and distract – from here on in.

The second poem in, ‘Will you be my Bridesmaid’, is an onslaught of conflicting emotions and messages. ‘[T]hink happy thoughts!’ it opens, ‘because you are best over the other ones ha ha’. Great: this is a joyful exploration of female friendship, and it’s already made me laugh. She’s telling me, now, about our in-jokes, our slightly ruthless banter at the expense of the other guests. But hang on – what’s this, fifth stanza?

What’s happened? I thought we were friends! McIlroy specialises in this sort of wrongfooting. A psychotherapist in ‘real life’, she invites us beneath layers of the conscious mind here: we hear thoughts that we usually don’t admit to having. It’s a discomfiting experience, but one which is ultimately rewarding, as well as deeply strange.

The following poem, ‘Just Idiot Talk’, is a piece of Scots polemic addressed to the English interlocutor, ponderously glossed line-for-line: ‘Yir patter stinks’ becomes ‘your way of presenting yourself to the world is fundamentally flawed’. The vitriol wears itself out: ‘I’ll jist dae it efter,’ concludes the speaker. ‘You know something, I feel a lot better’. Simply using threatening language has deflated the tension, and the speaker leaves sanguine. The passive-aggressive glossing of the English Sassenach, fussily precise, is no better at explaining what is ‘really meant’ than the more expressive aggro of the Scots: the compromise happens in the relationship between the two types of language, their give-and-take.

‘Incantation I’, a translation from the Gaelic, visits this theme too. A bride deals with an injured horse:

She put backbone to backbone
She put flesh to flesh
She put gullet to gullet
She put vein to vein.
As she is healing
I have this healing.

To exchange views and language, then, is to give aid – even if it hurts.

McIlroy’s language is spare, her lines quite often end-stopped. This helps the sense of her work, though the atmosphere of the poems sometimes tends towards the slightly chilly, despite their (frequent and successful) jokes. They aspire, perhaps, more to acceptance than to happiness. See, for instance, ‘Song of the Pauper’: ‘we are the bones, broken and scattered, are we not, / lying cheerfully and stumpily around, / clattering quietly at each other’s processes, / peace settling on us, against all reason’. The poem achieves resolution, but still I feel unsettled.

These are poems of the cleverest order. McIlroy’s observations – delivered in a neutral voice, from somewhere behind your head as you lie on the Freudian couch – are astute, wry, and nudge you gently towards an unusual sort of truth.