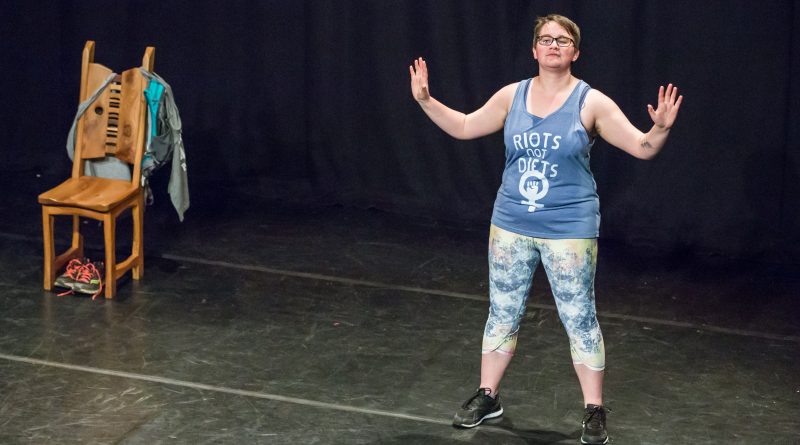 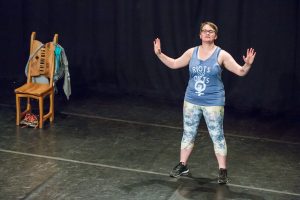 (Cards on the table – I was already a fan (and friend) of McMahon before seeing this show.)

What’s this show all about?

Katherine McMahon’s Fat Kid Running – in which ‘fat’ is used as a defiantly neutral term – is an engaging journey of self-reclamation that is both sharply political and achingly personal. By turns funny, relatable, tender, and righteously angry, this show is for everyone who’s ever had a difficult relationship with their body.

All too often – and especially for women – weight loss is seen as the ultimate purpose of exercising. Often taking precedence over strength, stamina, or the simple joy of moving. So how can a fat woman exercise for health and recreation, without being overwhelmed by the hatred of fat bodies that pervades fitness culture? This is the central question of Fat Kid Running. The answer boils down to: with difficulty, but damn is it worth it.

How does she tell the story?

The show begins by juxtaposing two experiences from McMahon’s childhood. Opening with a tranquil video taken from the edge of a lake, McMahon’s voiceover describes the unselfconscious “seal pup, rolling joyful” she once was. When she would swim 5k stints in Welsh lakes, her fat not a source of shame but of useful insulation. This calm is broken as the poet runs onstage and begins dashing from wall to wall, gasping out short lines between piercing beeps: “it is the year 2000. / I am twelve years old, / I am the fat kid / and they are making me do / the bleep test.”

In the description of school PE lessons that follows, exercise is now a forced activity, something painful and humiliating, marking out “chubby uncoordinated” bodies as unnatural, ugly, and deserving punishment. The visceral physicality of this section bursts into and disrupts the calm nostalgia of the lake scene. It also nicely sets up the stakes of McMahon’s struggle: working through the trauma of the latter to regain the peace and joy of the former. The section which begins “Dear PE teacher” is particularly affecting, questioning the motives and methods of those lessons and ending with the plaintive line “you were supposed to help us see what possibilities our bodies held”.

Where does the story take us?

Compelling as McMahon’s confessional and political work is, a full show of it might have been overwhelming. Fortunately, the ‘real’ world of school, GP surgeries, and afternoon tea is overlaid with another world of magic and metaphor. It is this that elevates Fat Kid Running to something truly special. This world is populated with aspects of McMahon, all of whom have their own voices and agendas. There’s her “seal-pup” and “monster” selves embodying joy and defiance; her “trickster feet” with “neon wings”; her “mischievous bones”; her “clever” belly; and the knowing heart who “sang praise songs to [my belly]’s fat / until I believed them too”. Emotions, too, are personified: Fear is a creature who lives in her wardrobe and rides around inside her sleeves like a pet snake. Meanwhile, different impulses try to distract and appease each other with music and ice-cream.

The most powerful instance of this magical realism is a sequence about moulting. Shifting into second-person, McMahon transports us to a reality where children soar through the sky on wings, but adults do not. The agony of losing your feathers – while your mother gently explains that this is just how it is, “sweetheart, you know grown-ups don’t have them” – and finding yourself abruptly numbed and incapacitated is a potent metaphor for the shock and stress of puberty. This motif of wings and soaring is returned to in more ‘grounded’ moments of the show, giving fresh and poignant resonance to what might (in another context) have been rather clichéd imagery when used about running.

Taking back the joy…

But Fat Kid Running isn’t all pain and trauma. The second and third acts blossom into joy and reclamation, as McMahon learns first to accept her body the way it is (queer, fat, hairy, dyspraxic, and at some points disabled). And more than that, to gradually return to exercise as a source of happiness, delight and strength. Each of these sections is marked by McMahon getting changed onstage in what feels like a deliberate ‘fuck you’ to the changing-room bullies of the first act. She swaps her plain running vest for one proclaiming ‘Riots Not Diets’ and then another emblazoned with ‘Training to Smash the Patriarchy’.

It is telling that learning to run and making sugary jelly from scratch are both framed as acts of private self-care and nourishment, when diet culture would see them as inherently opposed activities. McMahon embraces the idea of running as way of building oneself up – bigger, stronger, more – rather than of shrinking, “slicing off the excess to make the rest of me worthy”. Fat Kid Running also addresses the difficulty of doing exercise-as-self-care when accustomed to chronic pain. In a metaphor that will stay with me for a long time, McMahon describes her reaction to post-workout pain as that of an oversensitive fire alarm, learning to tell the difference between smoke and steam: “If the signs are pointing to something that will eat me up or something that will clean”.

In summary: an important show to be shared and talked about…

Fat Kid Running is a powerful, necessary work. It affirms all bodies as valuable in and of themselves, while acknowledging the challenge and complexity of unlearning the bodily shame and self-hatred encouraged by so much of our culture. McMahon explicitly disavows the idea that she has reached a fairytale happy ending – as with everyone, her relationship with her body will be always a work in progress. After the rallying finale (in which we were invited to join McMahon in yelling “FUCK THE BLEEPS!” every time a bleep interrupted her last poem), the theatre bar filled with friends and strangers sharing their own stories of awful PE teachers, sizeist bullying, and bodily reclamation. The show had worked a powerful magic on us, lifting the stigma around these discussions, and that itself was more than worth the price of admission.

This review is of the performance ar Camden People’s Theatre, 15th March 2018. If this sounds like a show for you, then you can find out more about McMahon, the show, and future dates here. 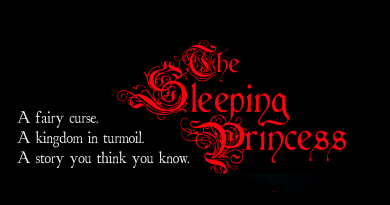