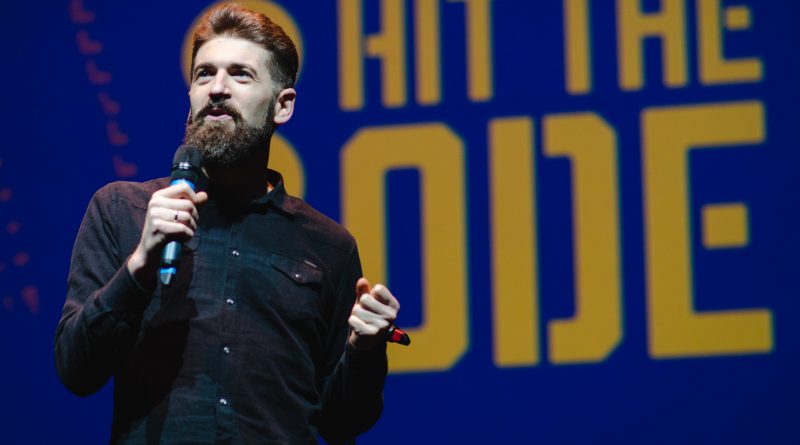 Hit the Ode was launched a decade ago in The Victoria, a popular pub in Birmingham city center, conveniently based near New Street Station. These days, however, the poetry night fills out the Patrick Studio of the Birmingham Hippodrome, but its mission remains the same: to provide a platform for open mic poetry performers, alongside three headline guests. These headliners offer a sample of regional, national and international poetry talent. It’s this last element that really sets Hit the Ode apart. The night’s founder and host, Bohdan Piasecki, commented,

‘When I started, it was one of the very few that had a budget. It was the only one in the UK which had an international guest as part of its format.’

This commitment to bringing audiences work from further afield was especially realised this month, as Hit the Ode collaborated with UniSlam, the UK’s largest team slam and poetry summit. The Hit the Ode x UniSlam Party brought together not only a stellar lineup of six features from across the globe, but close to one hundred student poets from across the country. The spirit of collaboration was palpable throughout the evening. Poets due to compete against each other the next morning came together to enjoy Bohdan’s hilarious ‘emotional warmups’ and showed immense support for everyone on the open mic.

Standout open micers included Jack MacMillan from team Strathclyde, who began by offering an audience member the choice, ‘Dog or Christmas?!’. Fortunately, ‘dog’ was selected, leading to a character poem which was laugh-out-loud funny. MacMillan delivered lines with a charming intensity, like a child revealing some very serious epiphanies:

UniSlam alumnus and prelim host at this year’s competition, Kieran Hayes, gave a similarly hilarious performance with his ‘rhyming CV’, gifting us with what might be my favourite line of the entire weekend: ‘I’m so good at photoshop, call me Adobe-Wan Kenobi.’

The first of the headliners, Bibi June, kicked off their set with a piece about bilingualism. Based in Glasgow but originally from Amsterdam, June alternated between Dutch and English and urged the audience, ‘If you have the chance, learn another fucking language’. The piece fluctuated from rhythmic to plainspoken, celebratory to cautioning, as June both honoured the ‘depths of other languages’ and reminded us of the oppressive history of English. Powerful lines like ‘to some people, English still sounds like a whip’ drew sighs and clicks from the audience.

Next to the mic was Antosh Wojcik, a poet who earlier that day had spoken eloquently on a UniSlam panel discussing current issues facing the poetry community. One of the key topics discussed at the event regarded the line between empathising with another perspective and appropriating someone’s experiences. While Wojcik and the rest of the panel agreed it is inappropriate to exploit another individual or community’s struggles for the sake of scoring points or signalling one’s own virtue, Wojcik admitted that he frequently writes about his sister and her struggles with substance abuse and mental illness. He explained that his intention is not to exploit her experiences but to understand them, and that he always tries to locate himself as a character within his poems about her, so that he can be held accountable for his writing. It was encouraging to see that despite being a world-renowned performer, Wojcik still interrogates his motivations for writing about other people’s experiences and is welcoming of further discussion on the topic. His poem at Hit the Ode, ‘A Stoner’s Autopsy of an Automated Dinosaur’, was a wonderfully personal and delicate exploration of his relationship with his sister, demonstrating that an awareness of the politics behind poetry makes for better work.

The third headliner, Vanessa Kisuule, was predictably brilliant; her final poem, ‘Last Night’, was a highlight of the whole evening. Reading from a copy of her stunning collection, A Recipe for Sorcery, I hardly noticed Kisuule had a book in her hand until the end of the set, such was her stage presence. After a particularly impactful line concerning female toilets in clubs –

‘You can take a few minutes to fall apart in here. No questions asked.’

– Kisuule paused to jokingly ask the men in the audience whether the same camaraderie can be found at urinals. There are few poets who can transition from solemnity to comedy and back again so effortlessly, and keep the audience hanging on every word.

Alisha Kadir, the regional poet of the night, represented Birmingham superbly. After opening with a song that demonstrated her talents as a musician, as well as a writer, Kadir delivered multiple poems that ingeniously played with form. I was mesmerised by ‘I watched the sun rise and fall today’, an intricate construction built from a simple repeating phrase which gradually changed and fragmented. When it finally dawned on me that the refrain was altering towards ‘she watched her son rise and fall today’, the air was knocked out of me.

I was particularly excited to see Caleb Femi, as several friends had recommended his work to me, but I hadn’t previously had a chance to see him perform. Femi surpassed all my expectations, his laid-back performance style allowing the quality of his writing to take centre stage. A highlight of the set was a new poem which responded to a frustrating experience with the press. ‘I was all over the papers, well, one paper,’ he explained. What followed was a quiet, steady, but emotionally charged piece, reclaiming an experience which had been manipulated by the media.

The final headliner to take the stage was Melissa Lozada-Olivia. Based in New York, Lozada-Olivia is known internationally for viral Button Poems, including ‘Like Totally Whatever’ and ‘If I Got Paid For All My Emotional Labour’. While these are undeniably strong works (the former won the 2015 National Poetry Slam Championship), I got the sense that they are very much designed for competition. They are fast-paced (to fit into the three-minute limit of slams), feature carefully-rehearsed movements, and crescendo in volume towards their finales. I would speculate that, having moved on to more experimental projects which are unconfined by the slam format, Lozada-Olivia may have slightly lost the emotional attachment to her older, finely-choreographed pieces. Her strongest works at the Hit the Ode were newer ones, where she seemed more connected to the words and performed more freely. Between poems she commented,

‘I’d been falling out of love with poetry but this night’s made me fall in love with it again.’

Credit goes to Hit the Ode’s producer, Aliyah Hasinah, for curating such a wonderful night of spoken word. It was enough to make a seasoned poet fall back in love with poetry, and enough to make a theatre full of stressed students (readying to compete in a national poetry slam) relax and enjoy themselves. As Bohdan joked during his introduction, UniSlam is a competition which ‘does a fantastic job of making everyone forget it’s a competition’, and Hit the Ode played a great role in sustaining this important illusion. 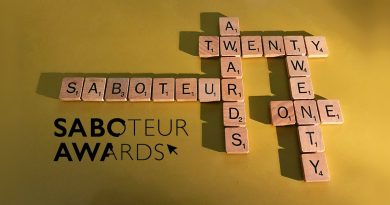 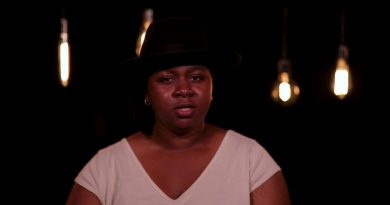