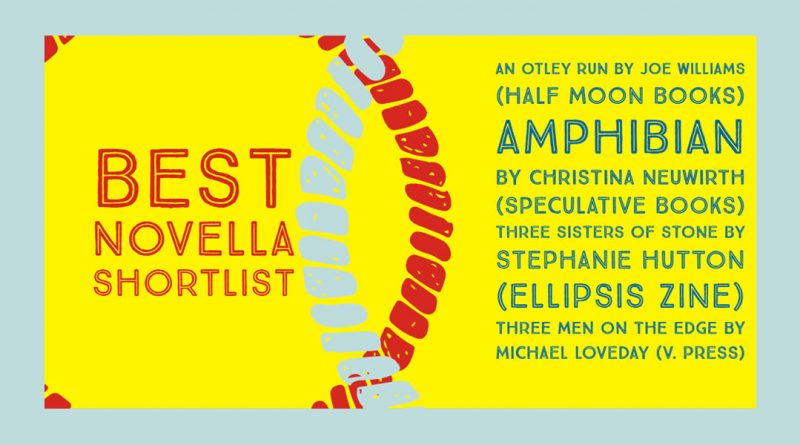 We have a wonderful selection of novellas that have been shortlisted for this year’s Saboteur Awards Festival. You can cast your vote for the best of the best until May 12th by checking out the form just here. That said, to give you a little help in deciding, we’ve asked the artists behind the works to tell us a little more about themselves.

An Otley Run by Joe Williams

Joe Williams is a former starving musician who transformed into a starving writer and poet in 2015, entirely by mistake. He lives in Leeds and appears regularly at events in Yorkshire and beyond. His poems and short stories have been included in anthologies published by Otley Word Feast Press, Indigo Dreams, Stairwell Books, Picaroon Poetry and Beautiful Dragons Collaborations, in magazines such as Prole, Strix, Dream Catcher, The Poet’s Republic and Sarasvati, and on poetry websites including Picaroon Poetry, Riggwelter, Algebra of Owls and I Am Not a Silent Poet. He won the Open Mic Competition at Ilkley Literature Festival in 2017 and was runner-up the following year. An Otley Run is his second book (you can access the book’s own website just here), following the poetry pamphlet, Killing the Piano, which was published by Half Moon Books in 2017.

You can find out more about Joe by visiting his personal website, and you can get in touch with him via his Facebook and Twitter channels.

Christina Neuwirth is a writer and researcher based in Edinburgh. Her short fiction has been published in Gutter and 404 Ink’s literary journal, and her non-fiction can be found in The Skinny, CommonSpace, Marbles, The Dangerous Women Project and in 404 Ink’s bestselling anthology Nasty Women. She was one of Queer Words Project Scotland’s five Emerging Writers 2018. Her debut novella Amphibian, published in August last year, was shortlisted for the Saltire Society First Book Award 2018. She is currently working on a novel and pursuing a PhD on gender equality in contemporary Scottish writing and publishing.

Christina has pledged to only read bisexual books in 2019. You can find out more about this project, and her other publications, on her website. You can also keep up-to-date with Christina by following her on Twitter.

Since publishing Amphibian Christina has written and discussed her writing process behind the novel, and you can read a little more about that by clicking here.

Three Men on the Edge by Michael Loveday

Michael Loveday writes fiction, poetry, prose poetry and book reviews. His novella-in-flash Three Men on the Edge was inspired by experiences of the Rickmansworth Edgelands on the NorthWest edge of London, where he lived for ten years until he moved to Bath in 2016. He teaches creative writing in Adult and Higher Education, and is on the Festival team for the Annual Flash Fiction Festival which takes place in Bristol. He has won or been shortlisted in various national and international awards for both prose and poetry. When he’s not writing, he’s reading. Or maybe it’s the other way around. Failing that, he sometimes gets to the cinema, enjoys a good stroll in the countryside and listens to electronica, alt-country and world music. He also spends more time than is healthy following sport on the BBC Sport app.
Michael also convenes a novella-in-flash course which you can find out more about by clicking here. You can keep up-to-date with Michael by checking out his author website or by following him on Twitter.

Stephanie Hutton is a writer and consultant clinical psychologist in Staffordshire. She has been shortlisted in various competitions including the Bridport Prize, Aesthetica Creative Writing Award and the Bristol Short Story Prize. She leads writing workshops in mental health settings as well as the community and believes in the therapeutic value of fiction. Her novella Three Sisters of Stone is published with Ellipsis, and there is a Kindle version of the novella available via Amazon.

To find out more about Stephanie and her publications you can out her personal website, and you can also keep in touch with her by following her on Twitter.