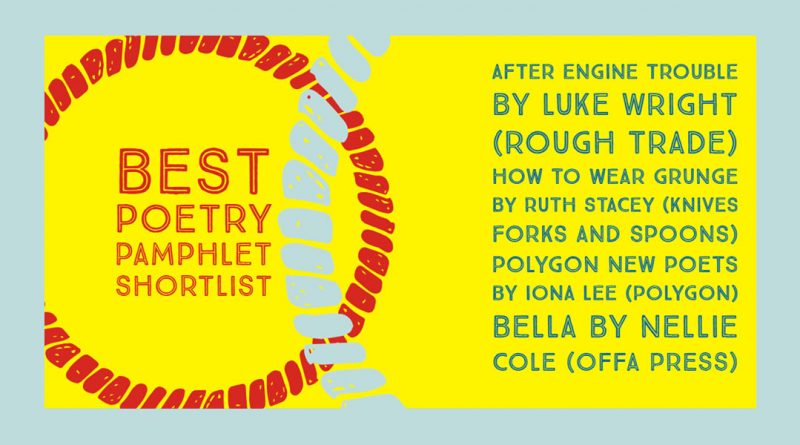 One of the most popular categories in the Saboteur Awards is the race for Best Poetry Pamphlet. Following the first round of public votes, from all the releases in the last twelve months you managed to narrow the search down to a final four favourites. You can cast your vote between them by heading over to the voting form here.

How to Wear Grunge by Ruth Stacey (Knives Forks and Spoons)

Ruth Stacey is a poet who lectures part-time at the University of Worcester. Her second full-length collection, I, Ursula, is forthcoming with V.Press. Her PhD research is focused on historical voice and the blurring of memoir and biography.  Stacey is currently researching the life of the artist Pamela Colman Smith.

How to Wear Grunge is a blurring of grunge girl biography and personal memoir. Voices interrogate unreliable narrators and the storytelling fiction of memory. This is a collection that takes an unflinching look at drug abuse, death and trauma; asking what leads to this wearing of a grunge lifestyle? Eventually though, it is hope, ‘as precious as a robin’s egg tucked inside an old kettle,’ that lives through it all.

How to Wear Grunge is available to purchase through Knives Forks and Spoons website, and you can keep up to date with Ruth by heading over to her personal website just here.

Nellie Cole is a Birmingham-based poet, the operations manager behind Verve Poetry Festival, and a member of the 2019/20 cohort of Writing West Midlands’ Room 204 programme.
Nellie’s debut pamphlet Bella (from independent publisher Offa’s Press) explores a true murder mystery from a rural Worcestershire town, known locally by the cryptic question ‘Who Put Bella in the Wych Elm?’ The poetic sequence reads like a dossier of evidence, blending local history, folklore, and superstition with the true tragedy of an anonymous woman’s life and premature death.
Luke Kennard has commended the poems for having ‘a mature and compassionate sensibility and an enviable gift for language’. The pamphlet has also been praised for being formally-adventurous, exhibiting an original use of page space. The pamphlet has inspired a student drama project at the University of Birmingham, and is being incorporated into a docu-drama on the mystery.
Bella is available to purchase through Offa’s Press’ website just here.

Iona Lee is a poet, performer and illustrator from East Lothian, Scotland. Now a graduate of the Glasgow School of Art, Iona fell in to the Scottish spoken word scene at the tender age of seventeen, guided by the watchful eye of her friend, mentor and drinking buddy Salena Godden. Iona went on to win the title of Scottish slam champion in 2016, and her debut pamphlet was published with Polygon last year. Iona has appeared on BBC Scotland, BBC Radio Scotland, The Verb, and has performed all around the UK and Europe. She has performed at Glastonbury, the Edinburgh International Book Festival, and StAnza to name a few, and has been published in the Scotsman, Gutter Magazine, the Morning Star and the Skinny. She also fronts an experimental beat poetry band called Acolyte. Her work revolves around themes of contemporary womanhood, folklore and existential fears.

You can get a taste for Iona’s performance style by checking out her one of her appearances from earlier this year, just here, and Polygon New Poets is available to purchase here.

Luke Wright is one of Britain’s top stand-up poets. Flamboyant, political and riotously funny, Wright’s inventive shows are enjoyed by thousands of people across the world every year. He is the author of two full collections and three pamphlets of poetry, and two verse plays. He is the winner of a Fringe First, a Stage Award, and a Saboteur Award.
In 2019 he’s been tour support for Peter Doherty, John Cooper Clarke, and Art Brut, as well as headlining his own 30 date tour of the UK and New Zealand.
For 11 years he co-programmed the Poetry Arena at Latitude, Europe’s largest poetry gig. He now curates poetry for Port Eliot and Edinburgh International Book Festival.
Luke’s pamphlet, After Engine Trouble, has been widely celebrated since its release and its available to purchase now via the Rough Trade website.