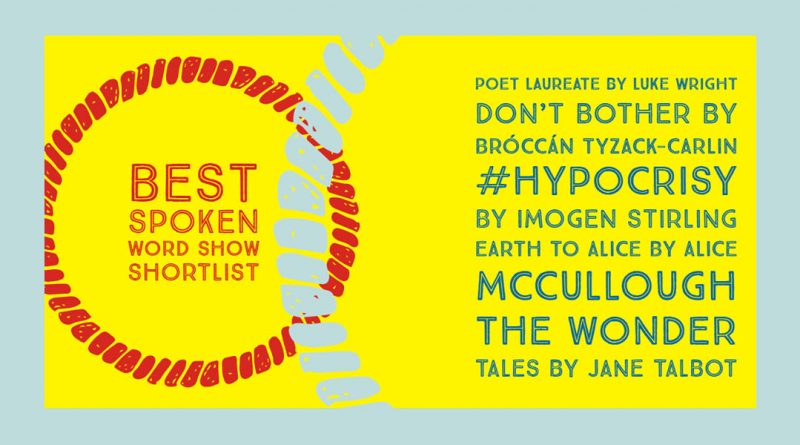 The Best Spoken Word Show is another staple element of the Saboteur Awards and this year there have been so many brilliant shows on offer that this category has five favourites for you to choose from, rather than the regular four. To cast your vote for the best spoken word show of the year, you can find the voting form just here.

Luke Wright is one of Britain’s top stand-up poets. Flamboyant, political and riotously funny, Wright’s inventive shows are enjoyed by thousands of people across the world every year. He is the author of two full collections and three pamphlets of poetry, and two verse plays. He is the winner of a Fringe First, a Stage Award, and a Saboteur Award.
In 2019 he’s been tour support for Peter Doherty, John Cooper Clarke, and Art Brut, as well as headlining his own 30 date tour of the UK and New Zealand.
This year marks Wright’s twentieth year of performing and he in-part celebrated with the witty and fierce Poet Laureate, a show that sees Wright throw his hat into the ring for the Laureate change-over. Further information about the show, and the wonderful reception it has received, can be found on Wright’s website.

Imogen Stirling is a performance poet, theatre maker and musician. She has performed extensively throughout the UK and abroad, including at Latitude Festival, Eden Festival and the Edinburgh Fringe, with her work featured on BBC Radio Scotland and BBC Music Introducing. Imogen toured and released two albums with hip hop/poetry collective Words w/ Friends before debuting her solo show #Hypocrisy at the Edinburgh Fringe 2018. The show sold out and was longlisted for the Amnesty International Freedom of Expression Award. It transferred to London’s Theatre503 as part of their ‘Best of the Fest’ programme and is currently touring. The script has been published by Speculative Books; the show has been described as ‘life-affirming artistry’ (Everything Theatre) and ‘a tonic for the tribal times we live in’ (Darren McGarvey). Imogen’s new show Love the Sinner premiered with Dundee Rep Theatre in early 2019. Imogen also works for award-winning independent publisher, 404 Ink.

For more information about Imogen and her work you can visit her website just here.

A stand-up poetry show about dead dogs, chocolate and nostalgia.

Bróccán Tyzack-Carlin presents a semi-coherent exploration of nothing in particular using some words that rhyme and some more that don’t. Blending surreal humour with storytelling and spoken word, Don’t Bother is a unique hour of comedy that is not to be missed.

Bróccán is the winner of the Manchester Slam 2018 and the Huddersfield Literature Festival Slam 2019. He was runner up in the Manchester Champion of Champions Slam, is a Hammer and Tongue National Finalist, and an alumnus of the multi-award winning Durham Revue.

For details of the next showing of Don’t Bother, you can click just here.

Earth to Alice, by Alice McCullough

Alice McCullough’s unconventional poetry performances have captivated audiences ever since she made her start performing Alice Fresco on the streets of Belfast. Alice prides herself on playing with the boundaries of where spoken word can go, interweaving humour, poetic language, storytelling and song with at times a light touch and at others a gut-wrenching honesty that can leave audiences feeling they have been on an emotional rollercoaster. In this new adaptation of her critically acclaimed one-woman show Earth To Alice, Alice tackles the stigma of mental illness head-on as she candidly shares both the bliss and devastation of living with Bipolar disorder, taking us from behind the locked doors of the mental health ward to the richness and beauty of a Belfast overcoming the trauma of the past, through streets steeped in mystic wonder, the voice of a city determined to reach for Peace.

For a taster of what Earth to Alice brings to the stage, you can find a clip of one of Alice’s most recent performances just here.

The Wonder Tales, by Jane Talbot

Jane Talbot is an adventurer, writer, performance storyteller, theatre-maker, and the founder and former Project Director of Women Aloud NI, a volunteer-run organisation which aims to raise the profile of women writers based in Northern Ireland.

A recipient of an Arts Council of Northern Ireland ACES award for 2018, Jane wrote (and appeared in) The Wonder Tales, a two-handed spoken-word show for adults which features storytelling and song. The highly acclaimed show toured Northern Ireland in 2018 and has continued to be performed in a one-woman format in 2019.

Like her first book, The Faerie Thorn and Other Stories (Blackstaff Press 2015), The Wonder Tales is not only a joyful celebration of Jane’s deepening connection with the local landscape (she moved to Northern Ireland in 2011), local people and local lore, but also a raw sharing of her own life experiences skilfully wrapped up in mirth, mystery and magick.

You can find more information about The Wonder Tales by heading over to Jane’s website.