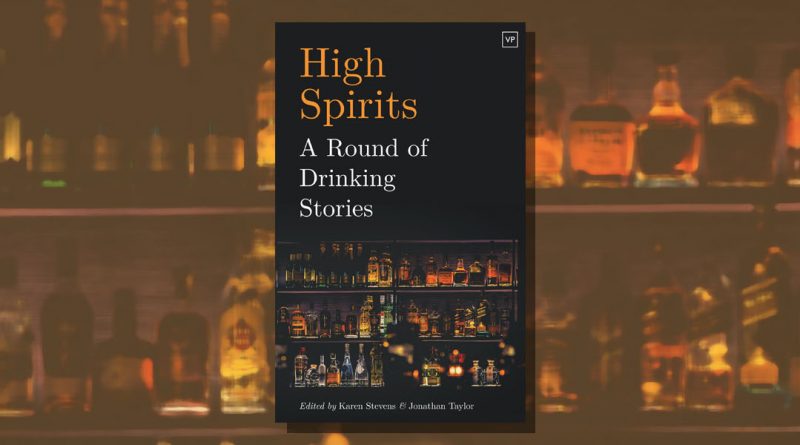 High Spirits: A Round of Drinking Stories. It’s a good title, and a pretty good description of the contents. This is a booze-soaked collection of – mostly very – short stories united around drinking, pubs and the time-honoured tradition of getting royally sloshed.

As made clear in the blurb and the long introduction from editors Karen Stevens and Jonathan Taylor, there’s a wealth of material to draw on. And so they offer comedy, tragedy, pleasure, pain and horror, generally seen through the bottom of a bottle. Even, in Louis de Bernière’s ‘Buying it Back’, via the bottom of a sick bucket. These are stories not necessarily about booze, but certainly featuring booze, and often almost as a character – not a pleasant one – in its own right. 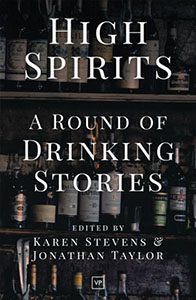 The population of the UK and Ireland has a long relationship with alcohol, almost as long, perhaps, as that between alcohol and literature. But in recent years, there’s been more of a tendency to see that relationship as problematic. We see frequent news reports of alcoholism being on the rise, of binge drinking destroying town centres and ruining the reputation of British tourists abroad (to say nothing of the health of the nation’s drinkers), and ever more sexual assault cases where inebriation is cited either as the reason for the victim’s vulnerability or a mitigating circumstance for the perpetrator.

And still, we drink.

The husband, finding the last bottle hidden in a wardrobe, reads through the tasting notes, and finds in them a chart tracing the decline and eventual end of the marriage, as well as a possible chance to salvage things. – Melanie Whipman’s ‘Tasting Notes’

In its discussion of the relationship between alcohol and literature, the introduction mentions not only drinking songs and wine poems, but also Anacreotics, or verses in praise of love or wine. It has to be said, there’s not much praise of the vine here, and much of the love has turned sour. The booze soaking this collection is a sharp and bitter sting of wine, not the mellow fuzz of beer or the gentle burn of whisky.

The introduction’s talk of inebriation and intoxication as stimulants and aids for the writer suggests there will be stories of Bacchic inspiration, of revels and moments where the veil is torn away and the workings of the world laid bare, if in an amber-tinted way. Both wine and the divine inspiration that comes from it will flow.

The Bacchic ecstasies and delirium, however, are hard to come by – perhaps it’s more realistic that way. Gifts from the gods are rarely straightforward. Possibly the collection’s closest feeling to the sort of detachment from the world experienced by the Classical followers of Dionysus is the grief-numbing distraction in Jenn Ashworth’s opening story, ‘Jackie Kennedy and the Widow’. The widow in question is attending the funeral of her late husband, who was ‘always good on a hangover’, but now isn’t around to look after her or the fallout of a heavy session, so nobody pays much attention when she wanders off into the night and what is surely the next step in a destructive cycle so far held in check.

That implicit danger, that tendency to be led from the path by the demon drink, sets a pattern for much of the collection.

These characters are struggling in their lives, or downright failing, and turning to drink as a drug of choice. These are not people gaining euphoria or release, and they are not like Charles Bukowski, quoted in the introduction as saying that drink ‘was going to help [him], for a long long time’. Quite the opposite.

Alright, so that makes it sound pretty dark. Heavy stout, perhaps, rather than the high spirits of the title. But then, this is a collection more focused on wine, beer and whisky than paler drinks; lager, cider, vodka, gin. Gin is a current fashionable favourite curiously absent, now I come to think of it.

But there are lighter moments. I make it sound like fictionalised warnings against alcoholism, and that isn’t really the case. All of these stories have real human dramas and concerns at their heart, even though a few feel like they’ve been cut off before they really get going (Judith Allnit’s ‘Under the Skin’, for instance, ends a little abruptly, like there are more pages to come).

So let’s look at those lighter moments. The stories in which drink is integral, but not the antagonist.

Stories like Melanie Whipman’s ‘Tasting Notes’, which uses the crate of champagne bottles bought for a couple as an engagement present to focus in on the moments in that relationship when those corks were popped. The husband, finding the last bottle hidden in a wardrobe, reads through the tasting notes, and finds in them a chart tracing the decline and eventual end of the marriage, as well as a possible chance to salvage things. Nobody’s racing to the bottom of the bottle, there are no violent rages, no serious liver damage, but the bubbly is still vital to the story, and could be a way of bringing people (back) together.

Or there’s Kate North’s ‘Beaujolais Day’, in which the framing device relies on the eponymous wine, but the story quickly goes off on a whole different track. Here, the drinking happens in moderation, as a background detail, but is still integral to what’s happening. The story itself is a neatly-handled one about growing up and coming home, and, I suppose, small victories. And two characters who happen to be getting gently pissed.

This sort of story, where the imbibing is in the fabric of the story but isn’t the overwhelming colour of the thread, where drink isn’t the source of misery and trouble, or an enabler for pre-existing problems, is an example of what this collection could have been. It stands in contrast to Desmond Barry’s ‘Our Lady of Penrhys’, where the drink and drugs certainly inform the structure – so well as to leave a hungover sort of feel – but the technical achievement is somehow overshadowed.

A few other themes are addressed alongside the hard stuff. Taylor’s own story, for example, ‘Just One More’, delves into some properly toxic masculinity, with its macho boozing culture, demeaning of emotions, and objectification of women, before taking an even darker turn – the scenario that unfolds is all too plausible and horrifyingly familiar. Laurie Cusack’s ‘The Bottle and the Trowel’ brushes up against some big issues of unequal power relationships, immigration and an increasingly perilous financial climate. Both touch on areas that have been prominent in public discourse for a few years now, but neither quite goes as deep as they might. Again, if they’d only been allowed a few more pages to get going…

I say the introduction is long because it’s much longer than any of the stories, and I suspect serves as a marker for the editors’ intentions with this collection, or at least an indication of their thought processes. They talk about epiphanies and inspiration from intoxication, and a book full of ‘the pleasures and pains of drinking’. The collection is to be seen as a pub, with a variety of drinkers inside. The stories that follow are varied, for sure, though we get more drowned sorrows than we do celebratory toasts.

To misquote that introduction: these are short stories with a drink problem.

‘High Spirits: A Round of Drinking Stories’, edited by Jonathan Taylor and Karen Stevens, won the Best Anthology Award at the Saboteur Awards 2019.