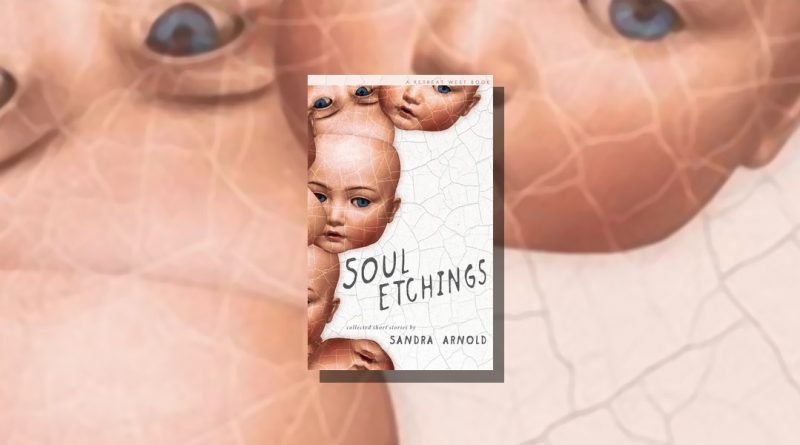 New Zealand author Sandra Arnold is a prolific writer of flash fiction, with over 80 pieces published in journals around the world over the past four years. Of these, 57 are included in her debut collection, Soul Etchings (Retreat West Books), giving a good overview of an impressive body of work. 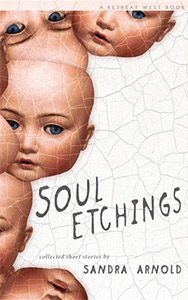 Filling her writing with vivid imagery and sensuous detail, Arnold conveys much in this short form. Some of her stories, approaching 1,000 words, lie on the cusp of flash and the short, short story, and at this length it is narrative which carries the weight of what she has to say. In ‘The Golden Balloon‘ we follow an ill-fated flight through the eyes of the balloon pilot’s mother until she sees ‘the golden envelope spread over the water like the wing of some enormous mythical creature’. In ‘Whistle on the Wind, My Lad‘ we learn the secret of why a shop called The Waiting Room draws its customers back. This is a story with a strand of wry humour, an always-welcome leavener in fiction. You may also smile at ‘House Rules‘, a neat twist on the notion of people trying to control one another’s lives; in this story the narrator’s house is the controller.

Arnold takes other excursions into fantasy and fairy tale. ‘The Girl with Green Hair‘ is one such, in which a girl is one with the tree after which she is named. In ‘The Gatherers‘, a girl’s life changes after she falls off a swing, and she can – or so it seems to adults – no longer hear. But her hearing is opened up to other sounds of this world and beyond, including ‘owl hoot and moon song’.

At around 300 words, this story is a tiny gem, inviting the reader into a world which they can populate with their own imaginings. It is for me at this length that Arnold finds her sweet spot, the flash being like that of a camera flashbulb, the brief bright illumination of which leaves an after image on the retina.

Similarly, The scent of lemons powerfully conveys the unreliability of memory with, as in all short flashes, what is not said and what you think about afterwards being most impactful. And, sitting pivotally at about the midpoint of the collection, the title story ‘Soul Etchings‘ is a glimpse of the numinous, that almost spiritual presence even for non-believers, which may touch us all just once in our lives, and which we never forget.

Only occasionally does Arnold disappoint. ‘Poems and Fantails and Leaves‘ is a direct window on someone’s pain. For me, an oblique or transformed view is always more powerful, as in ‘Grit‘, which locates a family’s grief and gives it a moving counterpoint in the vibrant colours and sounds of the New Zealand landscape:

“…where the air is filled with the humming of bees and the songs of larks, and the striking of hooves on stone. And the girl on the horse turns. She flicks back her long blonde hair. And looks at you with eyes as blue as the sky.”

Many of the flashes in this collection look at the disconnection between hopes and dreams and the harshness of everyday life. In ‘The Dragonfly‘ a boy’s dreams are literally crushed and the story has a killer ending:

“The sound of his father’s breathing.
Simon’s heart breaking.”

Arnold knows how to pace a story. There is something in ‘The Red Shoes’, with its juxtaposition of the child’s desire dancing shoes and her mother’s obsession with cleanliness, and the sadness of the way in which the conflict is resolved, which reminds me of the stories of George Saunders. I can give a story no higher praise than that.

I also love the single breathless sentence of ‘The Road to Nowhere‘, encapsulating a person’s pain. While in ‘Pretty Blue‘ a child runs off and the syntax matches the urgency of the search for her. This is one of my favourite stories in the collection, and its impact achieved in little over 250 words. Others which have stayed with me include ‘Esbos Boo‘, with its wonderful evocation of a magical child who is mocked for his strangeness until people hear his songs of the joy of nature and:

“and all the chatter and clatter stilled and everyone began to remember what they’d tried so hard to forget”.

If I were to choose just two stories to recommend from this diverse and really rather lovely collection, and to exemplify the variety with it, they would be these: ‘Louder than Words‘, a poignant narrative at the longer length about irreconcilable desires, and ‘Bluebell’s Last Flight‘, a brilliant little story about ‘the treachery of words’: a perfect short flash.

Find out more about Soul Etchings on the Retreat West Books website. 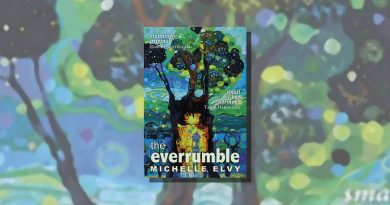