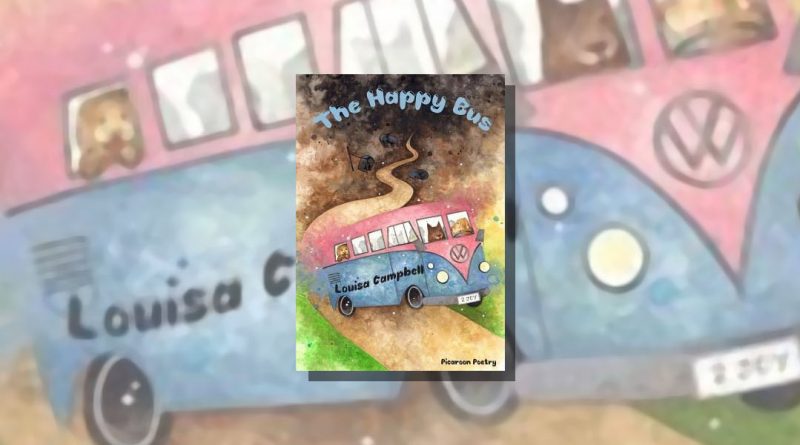 This slim volume covers some very difficult material. The title poem, ‘The Happy Bus’ is about a van which brings rescued dogs from kill shelters in Romania, to find happy homes in the UK, with loving owners. Sections of the poem are written in the thoughts of the rescued dogs, who are miserable and anxious because they don’t yet realise where they are going. However, this book is itself the happy bus in which Campbell shares her journey into joy, from a place of childhood abuse, and adult traumas into the happiness she enjoys today. It’s an escape route which leaves a trail of crumbs for others to follow. It is not by accident she worked as a mental nurse helping to heal others. Some of the poems are written for people she nursed. The book begins with some of the traumas and moves through the writing into a fulfilled life, which acknowledges the dark journey but celebrates the ability of humans (and dogs) to heal themselves when given the right environment.

The opening salvo warns the reader of the dangers of repressing emotions. It avoids being in any way preachy, because it personifies the negative emotions:

Grab on tight to all your grief.
Don’t take your fury by the arm
and frogmarch it into the street:
it will survive on scraps of thought
and memories left out for it.

The form used for this poem, with a tight rhythm and the slightly disquieting pararhymes, acts as a bandage around these emotions, and gives the creature only a small cage to inhabit, but the poem implies it’s much safer to let it go. As Blake tells us, ‘he who kisses the joy as it flies/ lives in eternity’s sunrise’, but here, Campbell is advising the reader to do the same with the difficult emotions. Many of the poems in the early part of the book use a similar technique, though the forms are varied.

One of the strengths of the poet is her ability to match form perfectly to meaning, in a way which enhances it and lives it. ‘Not Otherwise Specified’, a poem about disassociation, a state of being often employed unconsciously by survivors of abuse. The spaces in the centre of the lines express the condition effectively and allow the reader to experience it for themselves for a moment:

that I had to dis sociate

The purposely simple language here helps the reader understand that this happened to a child. However, the adult voice which occurs in the latter half, has realised that being mentally detached doesn’t help one to fight back. Like most of these poems, it’s empowering.

Poems about Campbell’s childhood are moving but defiant of her parents’ religion and the way they used it to control her. ‘Goo goo ga ga’ is punchy and angry. The child is blamed for being breech, and the concept of sin is wickedly used against her:

Put her in an iron hug.
Let her clutch a sin rattle.
Let her suck a shame dummy.

The end-stopped lines fall like blows. The reader can’t help but share the anger against these parents, though it is their own anger which is expressed here. The abuse continues in ‘Split Me Apart’. Adult words crush the child and send her to ‘brimstone burn’, the fear of a hell of torments which awaits a sinner after death. The child’s response is to detach, ‘Teddy/ and Bunny in ashes’. The imagery of the axe, chopping the child down like a tree is vicious. The poem takes a cliché like ‘chopping down to size’ and renews it to good effect.

This theme of the child being harshly treated in the name of religion resolves itself in a poem of contrasts ‘Hallelujah Easter Bunny!’ This poem begins with the child forced to contemplate the crucified Christ. Anyone raised in a religious home, whether treated badly or not, can identify with this. As a cradle Catholic, I was told myself how Christ died for our sins, which was incomprehensible as I hadn’t even been born when he was killed. The difficulty of coping with the example of torture is expressed vividly with words like ‘battered’, ‘twisted’, ‘rammed’, and the imagery of the thorns like ‘crows’ beaks’. The child is rescued by the Easter Bunny. The shift in the poem is created by using bright colours and details about the bunny:

He also has ‘furry mitten’ hands and ‘thumper feet’, and he waltzes her off into the sky, like the little boy and the snowman in Raymond Briggs’ Christmas story. The child-centred language works very well here to make the contrasts needed sing vibrantly. In the final stanza, the language of prayer is reclaimed by the poet, in her own version of the 23rd Psalm:

Verily, merrily
his perky pom-pom bobtail,
his pearly buck teeth
and all the boing-boinging
restored my soul.
Now I believe in the Easter Bunny!
Surely I will bounce with the bunny forever
Amen, Easter Bunny,
Amen.

This ending also reminds me of the celebrated ‘Timothy Winter’s by Charles Causley, in which he prays for angels to rescue the neglected child.

Campbell’s poems about her own children are also redemptive. Being a good mother has been a healing process, and even now, her children can lift her day with their hopefulness and child-like joy. In ‘School Run’ the ‘tired pavement’ receives the parent, as she walks from the distant parking place to the school gate. But her daughter’s view of the same things gives her a different perspective on the ‘stained mattress and straggly buddleia’.

The first stanza of the poem has long lines to show the effort of walking to the school gates (Campbell has a debilitating condition which causes joint pain), but the lines shorten when she meets her daughter:

You come out, beaming,
skipping in your dolly shoes,
hair swinging, catching the sun.
Inside your rainbow rucksack:
a purple dragonfly water bottle,
your easy-peasy homework,
pink and yellow plastic bracelets,
a book about glitter fairies
and a picture of a lamb
made with cotton-wool and pipe cleaners.

The child’s personality and innocence are perfectly illustrated by this charming list. It is the sort of childhood Campbell was robbed of, but her daughter shares it with her, and even lets her have the strawberry Haribo. The bond between them is uplifting for the reader too.

I have one small gripe, and that is, for three poems, it is necessary to turn the page to read the last few lines, and each time, I was surprised to see the extra lines, which didn’t always feel needed. This could have been solved by having the poems printed with the second page facing, but the desired order might have been disrupted by that. Worth considering in future, though.

One last poem to mention, because it’s not possible to discuss every one, but ‘My Lovely Ammunition’ is a very original way to talk about internalised anger. This poem, like many others here, will stay with me for a very long time. We all have a ‘lovely kalashnikov’ inside us, a righteous anger against injustice. 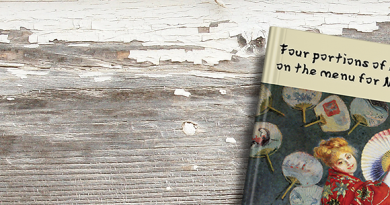